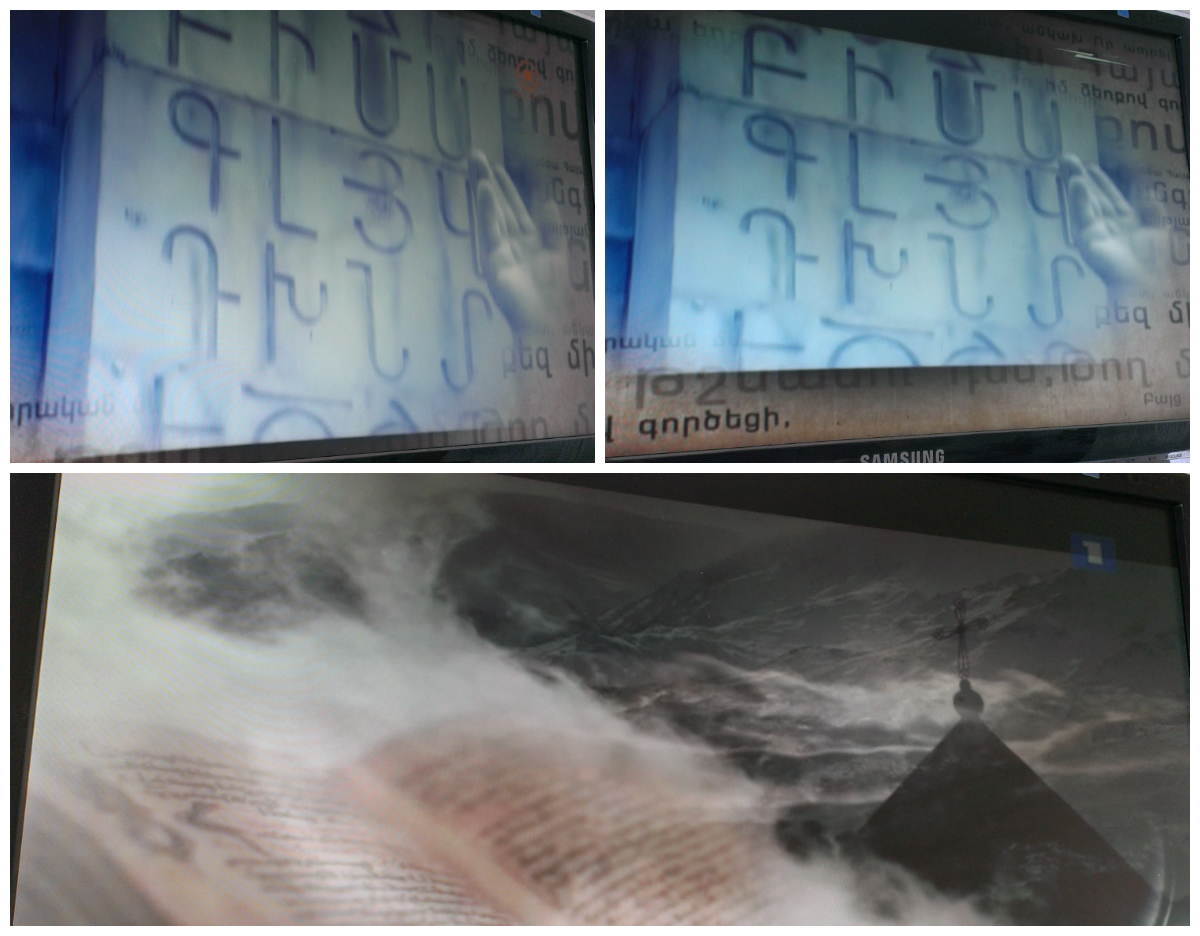 a) at the beginning and end of the broadcast,
b) at 6 am and 12 am, in the case of 24-hour broadcasting,
c) on New Year’s Eve, after the chimes of the clock in Republic Square in the city of Yerevan.”

And Armenian TV channels follow the law to the letter: they interrupt programming at the required time and broadcast the national anthem. Some reserved TV channels, such as Dar 21, only broadcast the music with an image of the flag and coat of arms; others prepared video content in which the song is accompanied by scenes of Mount Ararat, churches, horses, candles, the ruins of fortresses, clouds, soldiers, “tricolor” [referring to the flag] children, the Armenian alphabet, chess, and even wind turbines.

The editing of the videos likewise can be divided into two types: in some, the images follow one another; in the other, more “creative” ones, they blur into each other.

It’s interesting who watches the national anthem on television and stands up, as is considered acceptable. To be more exact: let’s assume that everyone watched it once, but who’s watched it a second or third time? Or who is able to watch it every day?

I don’t know what were the arguments for adopting this provision of the law, but when the national anthem is shown on television, it just becomes another program, and no program, not even the best one, is viewed more than a few times. This means that as soon as the national anthem begins, people change the channel and watch Russian or other foreign TV channels.

So, what feelings can the national anthem evoke, which, as soon as it begins, TV viewers try not to listen to it? In the best case scenario, boredom. In the worst case, it gets on one’s nerves, especially since nearly all the channels show feature films at night, which, even so, are regularly interrupted with commercial breaks.

A different problem is that the more we hear the national anthem, the more bizarre it seems that we as a nation — big and small, soldiers and academics, football players and… miners — sing the words sung by a girl. It is known that, with only a small change in the lyrics, “Mer Hayrenik” was the national anthem also of the First Republic of Armenia. My deepest respect to the state officials of the First and Third Republics (or at least to some of them), but personally it’s difficult to experience sincere emotions while singing the following lines:

Here is a flag for you, my brother,
That I have sewn
Over the sleepless nights,
And bathed in my tears.

Thus, I urge to declare a competition for new lyrics or a new national anthem. Those who will win the competition will be sponsored by the government — greedy or foreign-loving people who will demand royalties each time the anthem is played or will write the lyrics in Russian and send them to Moscow for confirmation.

So as not to evoke negative emotions toward the national anthem, I think the solution is for leading TV stations to conduct surveys and based on their findings try to remove this article in the law, with the exception of the last point (“on New Year’s Eve, after the chimes of the clock in Republic Square in the city of Yerevan”).

This will allow us to avoid the current situation: discrediting the national anthem by playing it every day and the TV-viewing population of the Republic of Armenia en masse changing from Armenian channels to foreign channels upon hearing its first few notes.