No Offense: The Disease of Lack of Exposure 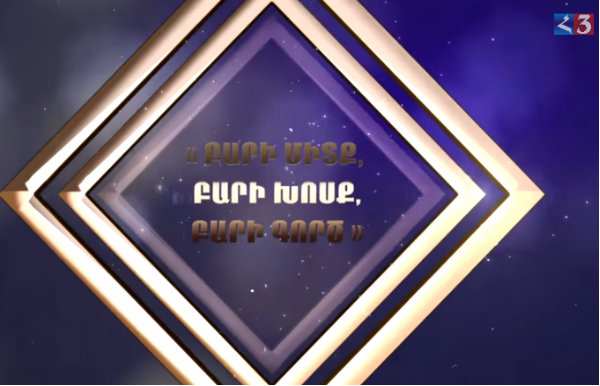 When a new TV channel launches in Armenia, we can wager that

(a) Sunday night will include a time slot for Armenian film, and
(b) we will see foreign-language names of TV programs.

If the first is an inconceivable coincidence, probably from the mystical realm, the second stems from the bourgeois misbelief that foreign languages are preferable to Armenian — the foreign language that is most influential at a given moment.

One of the most striking examples was Armenia TV, where, on one hand, the series Mer Lezun, Mer Khosqy (“Our Language, Our Speech”) got its second wind, and, on the other hand, in the program even Armenian letters were rare, while literate and sound Armenian was banished from the air (observed a month ago via the Ucom cable network*).

The remnants of these rare displays of “foreign-mania” today can be seen in ArmNews TV (part of the same media holding) in titles such as Prime Time, Artnews, Banadzev Weekly, and ArmComedy Weekly, among others.

The reason for this article, however, is the H3 channel, which replaced Yerevan TV a few months ago.

It’s probably not right to speak of that which has passed (as per the Latin phrase), so let me just say that who watches Yerevan TV has always interested me, as I myself have never met any of its viewers.

The new or renamed H3 began broadcasting with a large volume of its own programs, which is a good thing and a serious bid to acquire viewers, but I won’t be commenting on its programming content — for two reasons:

What we can talk about are the titles of H3’s programs: there are so many English words in them that it might seem a foreign-language channel was launched.

The occurrence is because of lack of exposure — in a sense, favoritism of the other and voluntary colonization.

The justifications are predictable, that Armenian words are long and many English-language words are used internationally, but alongside the chewed-up Armenian titles of H3 programs are successes: Khosqits khosq, Khndukner, Medali hakarak koghmy (“The Reverse Side of the Medal” — perhaps, in any case, the “face”?), Azatutyan arvest (“Art of Freedom”), and so on.

That is to say, if effort was made, H3’s creative minds could’ve thought to “Armenian-ize” the English-language titles of its programs.

In addition, anyone who justifies mixing a foreign language into Armenian should remember when in the 5th century the means of mass communication of the time — the liturgy — was being “Armenian-ized,” for a thousand years Greek was synonymous with culture, Persian was the language of empire for just as long, and for 500 years civilization was spread through Latin.

And if our “elastic and barbaric” language seems to anyone cumbersome and lifeless, he should ask himself whether this isn’t so because of the fault of his actions or… inaction.

*Updated on February 11, 2015, at 8:38 pm local time: The statement “observed a month ago via the Ucom cable network” was added, since not all of the TV programs’ names mentioned in the article correspond to the current situation.