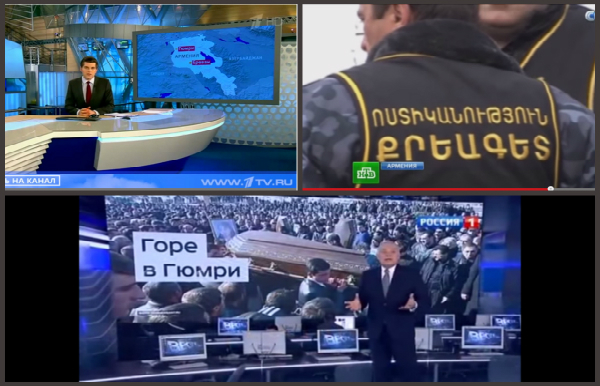 An exceptional thing happened in Armenia — the public declared January 20 a national day of mourning. As was fitting, thousands of people lit candles in memory of the seven victims of the Gyumri slaughter.

But what will happen now, when these displays of mourning are followed by everyday life? I’m not talking about coverage of the trial, which is a separate huge issue, but the attitude [RU] of Russian state television, which covered the horrific crime three days late.

The number is symbolic: also three days late were the Soviet troops, when in 1988, innocent Armenian inhabitants of the Azerbaijani city of Sumgait were being killed, tortured, and raped. (During the 1999 Baku “pogroms” the delay was seven days, as in the case of Vladimir Putin’s condolences.)

The only assumption that seems reasonable is that they were prohibited from speaking until the Kremlin developed a favorable version of the story: say, the US was directly involved in the suspect, soldier with the Russian 102nd Military Base Valery Permyakov, wiping out an entire Armenian family… that the suspect’s father is not a follower of the Russian Orthodox Church and so on.

This means that when the trial (the “Russian trial” [RU], according to Putin’s spokesperson Dmitry Peskov) begins, Russian TV stations won’t be silent but will present the crime and the “murderer they have made their own” in their own light — directly or indirectly offending Armenians and the Republic of Armenia.

Broadcast of Russian TV channels in Armenia is regulated according to an intergovernmental agreement between Armenia and Russia. Three Russian channels are broadcast in Armenia: the First Channel, Rossiya RTR, and Kultura, as well as the Russian-language Mir. Isn’t this the best time for Armenian parliamentary factions to demonstrate initiative to review the intergovernmental agreement?

Many will think what’s the point if the parliamentary majority Republican Party of Armenia and its leader didn’t even have the courage to declare mourning; moreover, on the day of public mourning, they flooded Gyumri with armed law enforcement officers and took military helicopters to the sky of the capital so people will be afraid and not mourn against them and against the Kremlin.

There is a point. Taking initiative and losing is one of the stages of struggle, which informs the public of the idea, encourages possible proponents, acquires new supporters. Such an initiative might become proof that apart from Gyumri residents and the decent citizens of Yerevan, Vanadzor and other localities, there are also people having that quality — decency — in government.

Otherwise, we should start a petition for the word “national” to be removed from the name the National Assembly of the Republic of Armenia, or for the right to use it the parliament should pay an annual state duty — in the amount of 600 times the base duty, as prescribed in the Law of the Republic of Armenia on State Duties [AM] Article 20 Paragraph 31: “for permission to use the words ‘Hay‘ [Armenian], ‘Hayastan‘ [Armenia], and ‘haykakan‘ [Armenian] and their translations in distinguishing the name of a trade name.”

Russian TV stations neither explained the conspiracy of silence (the three-day delay) nor apologized: “wiping their feet on the Armenian people,” as the Russian authorities’ entire practice was characterized [RU] by Russian writer and journalist Yulia Latynina. The citizens of Armenia have a decent way of expressing their attitude toward them —