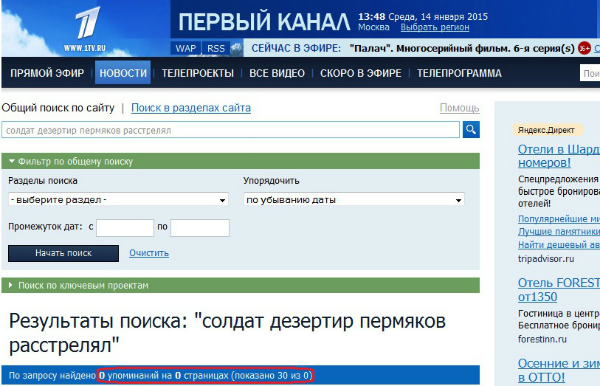 Russian TV stations responded to the murders in Armenia’s second-largest city, Gyumri, with a conspiracy of silence.

On the first day, January 12, none of the three major Russian-wide channels (Russia-1, First Channel, and NTV) had coverage on the massacre, for which Valery Permyakov, a soldier in the Russian 102nd Military Base in Gyumri, was suspected.

The First Channel was so deep in hypocrisy that in the main news broadcast of the same day it blamed Europe in widely covering the Charlie Hebdo murders but ignoring the seriously injured child in Donetsk while not saying a word [RU] about the tragedy that shook Russia’s “strategic ally” Armenia (keeping mum even to this day).

The next day, on January 13, NTV broke the silence with cynicism that surpassed the First Channel’s. One of the channel’s news broadcasts reported that a soldier fled the Russian military base in Gyumri but was found and delivered to the commander.

That is, the issue concerning NTV regarding the deserter was the assurance of the Russian authorities’ control. It might seem incredible, but the TV station that’s transformed its airwaves into a blood bath through its various crime shows and stories did not talk about the murders… at all.

“The military conscript, who was arrested while crossing the Armenia-Turkey border, was handed over to the commander of the Russian Federation’s 102 Military Base in Armenia. This was announced at the leadership [literally] of the Federal Security Service (FSB). The deserter’s name is Valery Permyakov. He was discovered not far from the village of Bayandur, nearby where the Russian border troops are located.

“The trespasser was in civilian clothing, and had three mobile phones and a large sum of money. No documents were found on him. After he was questioned and identified, Valery Permyakov, in the presence of investigators and prosecutors, was delivered to the [military] base’s commandership, where he was serving earlier.”

A typical phenomenon for Russian state propaganda. To tell or not tell the truth as much as it is beneficial at the given moment, even though it may be a trifling part; say, the soldier’s escape from his military base — without mentioning the murders attributed to him.

This, of course, makes journalism ridiculous, even Zvezda TV wouldn’t report an ordinary incident of desertion, but perhaps NTV is sure that Russian TV viewers have been brainwashed so much that they won’t notice anything unusual.

In order to avoid any misunderstandings, let me clarify: in the first scene of the video uploaded on NTV’s website, there are headings that describe the murder, but only the quoted text [RU] was broadcast on air.

Of the other major TV stations, Rossiya-24 channel, likewise covering the murder one day late, emphasized that Permyakov was excellent in his military service. What is the point of this information? Is that a extenuating circumstance or is excellence a prerequisite for carrying out human massacre?

And finally, RBC TV, which participates in displays of propaganda relatively less and even gives voice to Russian opposition figures, in its approximately 100 news broadcasts (once every half hour) of the last 2–3 days found no other way of reporting the bloody violence apart from broadcasting TASS agency’s news ticker on the screen.

It’s unfortunate but the Armenian state authorities’ main concern was dispelling anti-Russian sentiment [befitting the leadership of a state (Armenia) that’s in the pocket of another state (Russia)], when nationwide Russian channels in every way bypassed the gruesome murder, which really could lead to Russophobia.

Covering up a murder is an act that bears criminal responsibility. Perhaps this legal punishment should apply also to the media — especially for nationwide Russian TV channels.