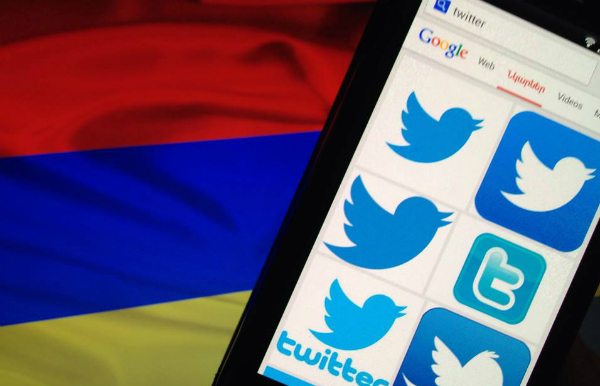 The flow of news and information today spreads mainly through social media. Since Twitter provides for an open flow of information, easily searchable by keywords, it has become the main platform for keeping up-to-date on international events.

Armenia is nearly absent on this platform — and not only because there are far fewer Armenia-based users than on Facebook or the Russian social networking site Odnoklassniki. But because few news outlets and state institutions are able to use this platform to communicate information to the rest of the world.

Today, mainly Armenia and Karabakh diplomats use this platform. However, since for the most part local news outlets broadcast information on Twitter on an automatic basis, while the majority of journalists is passive, there is nearly no flow of news from Armenia to the international community.

As it is apparent in the first graph, the word “Armenia” in Armenian script (#Հայաստան) is nearly absent in news flows (the data is from the analytics provider Topsy, owned by Twitter).

In the active Russian-language feeds, we are tied to our political and information doppelgänger, Azerbaijan, which can be seen in the graph of tweets about the two countries in a one-month period.

There was a spike in tweets surrounding the incident on November 12, when the situation at the border escalated after an Armenian helicopter was shot down by Azeri forces.

There are fewer tweets referring to Karabakh (or Artsakh).

All this shows that Armenia is practically absent in foreign media, and when it is present, it is a passive subject, whom others speak about among themselves.