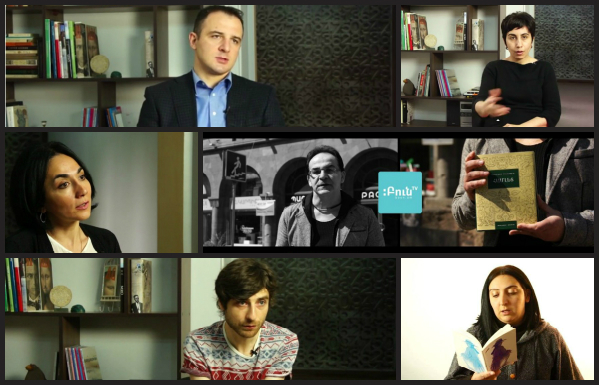 About a year ago, links to online videos (in Armenian only) featuring discourses not well-known to the Armenian public began to appear on Facebook. The speakers also were not known to the wider public, but they were intellectuals representing new ideas and up-to-date in their sector.

In a year and one month, the online TV company produced a hundred videos classified into 45 sections, among which are conflictology, cultural studies, anthropology (not in the Soviet perception — physical — but social, cultural anthropology), and information technologies, which are either new sciences or newly taking hold in Armenia.

I’m thinking, of course, of Boon TV [AM], which describes itself as “the first scientific-professional Armenian TV”. Why “of course”? Because in a short period of time the Armenian community on Facebook came to know and love the company (there are no statistics; I am relying on my own impressions).

Boon TV’s success, in my opinion, is due first and foremost to the demand for intellectual “entertainment,” the existence of which a significant part of the Armenian public either is unaware or, being even the bearer of it, has not resolved for itself.

Meanwhile, major information theorists consider “creatively resistant consumers or national cultures” the model audience in the period of globalization (according to Colin Spark’s research, as cited in Paul Jones and David Holmes’ Key Concepts in Media and Communications, p. 22, Table 2), while the international initiative Theory and Practice does the same at the event level.

The second “guarantee” of Boon TV’s success is the inadequate level of higher education in Armenia, the reserve of lecturers’ knowledge carried over from the Soviet era, and the formal nature of instruction in many Armenian universities.

Boon TV’s third advantage is its position for scientific and cultural material not to serve the moment of opportunity — unlike the modus operandi of traditional TV, which ethnographer Gayane Shagoyan accurately describes [AM] in the preamble to her talk on Boon TV (5:00):

“When any reporter from any television station calls and asks [me] to comment on some news item… or participate in a talk show, which I, as a rule, refuse… my position is already and at once shaped for me. They call and say, ‘So, it’s like this: we’re doing a talk show on mixed marriages, and we need for you to come and explain why mixed marriages are dangerous for Armenians.”

On the other hand, the comparison is appropriate only prima facie: online and public broadcasting audiences are radically different in Armenia. Suffice it to say, Yerevan State University Rector Aram Simonyan’s lecture gathered 85 views on YouTube in one and a half months. It must be assumed that those are the YSU students who watch television (or, perhaps, just the public broadcaster’s programs).

On the basis of this difference, perhaps in the near future I will try to draw parallels between “Hanralsaran” and the Russian Kultura channel’s program “Academia,” especially since the latter is broadcast also in Armenia.

Whereas Boon TV is like the Russian online TV “Poznavatelnoe” (“educational” TV), the first five sections of which are Health, Family, Beauty, Business and Money, and House and Mansion. A sequence, which reminds one of Armenian toasts, but surprisingly is not very different also in content. “Sweet Money” host Oleg Torsunov’s talk, for example, is completely devoted to stating that women shouldn’t earn money but rather stay at home and earning money is a man’s job.

The same site also includes several talks by historian Alexander Dugin (who is well known in Armenia), one of which is titled “Why is the United States friends with undemocratic countries?”

And finally, it became clear on Boon TV’s first anniversary that the company is financed by founders Kristine Armenakyan and Gemafin Gasparyan — with their modest means.

A picture typical of Armenia today: a wide variety of sponsors provide money to the media, a significant portion of which is lost, while an educational TV company is established by the funds of two youths.

On the other hand, it has its advantages: Boon TV is free from any demands or restrictions in presenting Armenia’s intellectual crème de la crème to online viewers.