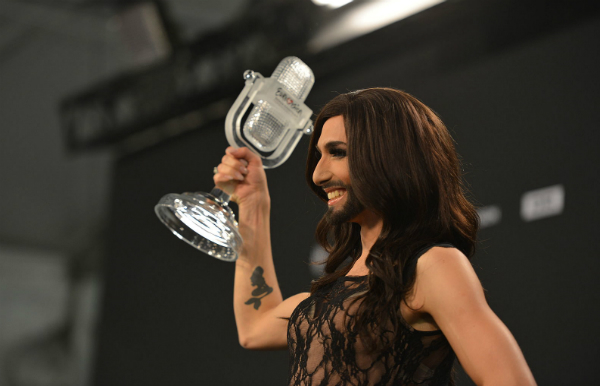 There has been a full-out war these past few days in the local media and the Armenian segment of social networking sites. The war began from the Eurovision Song Contest and reached the most hidden layers of psychology, awakening in people’s soul the awareness of their own importance. Writing, commenting — everyone expressing their wrath and clear position.

Expressing one’s own view wasn’t enough — it was considered necessary also to derogate, curse, and ridicule those of the opposite opinion. In this way some people (on both sides) not only raise in their own eyes and acquire the image of a “principled” person, but also prove that they do their job well.

It seems that Eurovision shouldn’t have created such a wave (it’s a minor contest, after all, with unsuccessful songs), but everyone in Armenia without exception learned the name and image of this year’s winner (it’s interesting: does anyone remember the name of last year’s winner?).

And it turned out that Conchita Wurst in the guise of a bearded lady performing a melodious song gathered in the palm of her hand Armenia’s news media and continues to keep not only social networking sites, but also traditional media on edge.

Strange and full of excitement, Conchita became an occasion to talk about elections, politics, sexual issues, human disgust and respect, about the direction of the state, and liberalism. Also to compare overall humanist provisions and ancestral traditions, and European and Armenian values (as if they are opposed).

This perhaps is one of those rare cases when people began to unite, form armies, and regularly attack dissidents. “Perverse Europe” and “Armenia with namus” faced each other in cyberspace. There is no other color: only black and white.

H1, which broadcasts the competition for viewers in Armenia, for years has been making calls on air — Armenians around the world, unite and support our country’s contestant! For many, however, the command to unite on the basis of ethnicity is already a subconscious reflex: when the call is made, logic is suspended, as happened, for example, in Conchita’s case: it turned out that in order to unite, you must stone, destroy, and mock. To unite, by being against. To unite even more so, by being against the struggle of those who are against.

There seems to be no other code to unite; the only thing is to launch a war against something as a nation (better that it be not inside Armenia, but rather, an enemy or hostile influences outside). This way, the idea of being closed, narrow-minded, aggressive, and protected, which works quite successfully in authoritarian states, is justified. The media ensures the advancement of this idea.

In social networking sites and the media, the attacks against European influence are encouraged above all by media activists, whose profession it is to keep the topic alive and branched out (according to the taste of the person running the show, of course).

Outstanding activists have been working for a long time in social networking sites. They create local sources for civil war, making information throws and not allowing the topic to fade. It can be said that they engage in special guerrilla operations; for example, they ensure an amount and form of information that’s impossible to ignore.

Now Conchita is mentioned so much that it enables you to hide anything about her in reviews, collages, status updates, comments, reportages. And it’s not that without Conchita we’re better, but that we’re better only by speaking out against Conchita, so that on this backdrop, the current situation in Armenia seems bearable.

In this situation, news articles being read is directly proportional to the ringing of conjecture in the articles, being full of sharp, vibrant, superficial descriptions. This perhaps is not “yellow” but colorful media. The petty clatter creates an illusion of timeliness and scandal and is read the most, after all.

Edgy and daring opinions about Eurovision were published, and political technologists, religious minorities, and Members of Parliament having a dark past disseminated their views.

Even H1 in its main news program made a special reference to the winner of Eurovision and advised her fans to go plant trees (which, perhaps, should be understood as a reproach directed to the Yerevan municipality — after all, green spaces are constantly decreasing).

On the backdrop of this overall hysteric, nationalist media, a careless phrase, even a word, implies downfall. This happened with singer Nune Yesayan in 2008, who said in a press conference that those killed in March 1 in Yerevan, well, it was their own fault — it would’ve been better if they stayed at home and not go out on the street. And now Eurovision Armenian national jury members Inga and Anush Arshakyan expressed [AM] some rather questionable thoughts about people with mental illness, gay people, and disgust.

This is how it is in information warfare — a huge bonfire is kindled by a small spark. Especially when there are skilled experts in the task of inventing and disseminating sparks (and bonfires). When necessary, they recall Mother Armenia and say their manly bit about unshaven singers and Christian values. And give advice to fight not corruption, but gay people.

Usually when the degree of tension is constantly increasing, a demand arises to redefine different myths, fears, and calls. Ultimately, also to find new arguments, since the call to unite as a nation against Conchita sounds somewhat petty.

Wars are sometimes fertile. Especially those that break stereotypes and color minds.