What to Call the President of Armenia 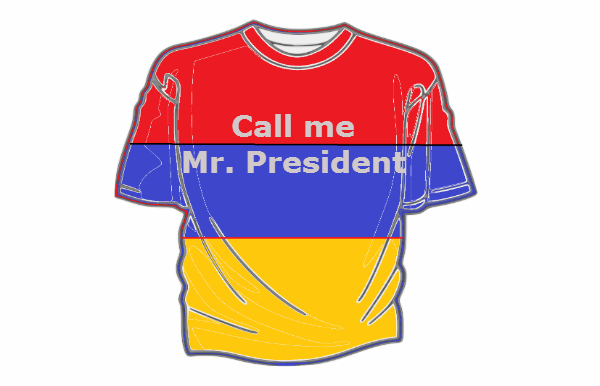 Since 1996, the officially declared results of elections in Armenia haven’t quite earned the public’s trust, and local news outlets have a particular problem of what descriptive to use ahead of the first name and last name (or only the last name) of the country’s actual president.

Let me emphasize, I’m referring primarily to news stories and not to commentaries or analyses: in those cases, authors have more freedom in their choice of descriptive.

For TV companies broadcasting on official airwaves, it seems, there is no such problem: “Armenia’s president” and “President Sargsyan,” which, in my opinion, is a correct choice. Less preferable is “the country’s leader” or “state leader.” These expressions are one step down from the level of neutrality.

The issue is not that there’s a mistake purely in terms of formality, but that these latter phrases contain an inexplicit positive coloring (that is, a positive connotation) of the news piece.

In these 17 years, the opposition in pronouncing or not pronouncing the president’s name usually uses the following expressions: “the individual holding the office of president” or even more strongly, “such-and-such who’s occupied the presidential seat.”

Naturally, opposition-friendly news outlets imitate this fashion. Here there are a few variations. For example, at one time, the newspapers Ayzhm and Iravunq called the president “prez”. Also quite common are the abbreviations “ltp” [for Levon Ter-Petrossian], “rk” [for Robert Kocharian], and “ss” [for Serzh Sargsyan], which, in my opinion, speak to the lack of not only professionalism, but also dignity.

Of course, when we cite [other] politicians [who use these expressions], “the holder” and “the occupier” are acceptable, of course, as long as they’re in quotation marks. But we journalists, as we know, have to report the news — not participate in it.

Sometimes news outlets, taking into consideration the particularities of elections in Armenia but not wanting to repeat the opposition’s political assessments, apply the relatively milder choice of “acting president”.

But that too is not a good option because in official, “classic” terms it is used under completely different circumstances. For example, Barack Obama was elected on Nov. 4, 2008, and from that moment on was considered the elected president, but until Jan. 20, 2009, the US president’s duties were carried out by George W. Bush — that is, he was the acting president. Thus, “acting president” is not an indicator of questionable legitimacy, and it cannot be used as such by news outlets.

Another solution, apparently, is not to mention the position at all and to say or write only the first and last name. But that too poses problems. Let’s assume you write: “Present were Serzh Sargsyan, prime minister Tigran Sargsyan, and defense minister Seyran Ohanyan.”

In short, accuracy and professionalism in journalism, in my opinion, require that current, former, and succeeding presidents be called “President of the Republic of Armenia”.