Investigator has No Right to Ask Journalist to Reveal Her Source 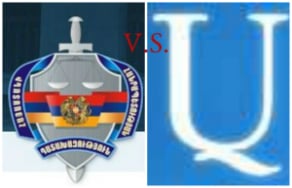 According to Aravot online editor Anna Israelyan, the editors have received a writ [AM] “to present [ourselves] to RA Ministry of Defense Investigation Service […] investigator L.A. Petrosyan to give a testimony regarding criminal case number 32102413. From conversations held earlier, it became clear that the subject of the interrogation is going to be [Aravot‘s] June 4 article ‘Was Surik Khachatryan’s Arrested Son Under the Influence of Drugs When He [Fired the] Shot?’. The investigator is interested in knowing how secret investigation information was published.”

ARTICLE 5. PROTECTION OF SOURCES OF INFORMATION

1. The persons implementing media activity and the journalists shall not be obliged to disclose their sources of information, with the exception of the cases set forth in the 2nd part of this Article.

2. The implementer of media activity or a journalist can be obliged to disclose the source of information by the court decision, in the course of a criminal proceeding with the aim of revealing heavy or most heavy crimes, if societal interest in law enforcement overweighs the societal interest in protecting the sources of information, and all other means to protect public interest are exhausted. In such cases, at the petition of the journalist, the court proceedings can be held in camera.

Everything is clear and simple. Only the court, Mr. Investigator, do you understand, can ask for a source to be revealed. And not just like that either; one has to prove to the court first that the aim is to revel a “heavy or most heavy crime,” and second, that “societal interest in law enforcement overweighs the societal interest in protecting the sources of information, and all other means to protect public interest are exhausted.”

If the investigator, without a court ruling, demands this, then that is an UNLAWFUL request. And an UNLAWFUL activity is a violation…

That is, the Criminal Procedure Code also stipulates that revealing a source can be demanded only by the court. Otherwise, this addendum wouldn’t have been made.

As for the investigator’s other insistence, that an investigation secret was published, well here too everything is clear: first, the news outlet was not obliged to know that the information it received was secret (actually, it’s clear from Aravot‘s report that it’s not an investigation secret at all, since attorney Ruben Sahakyan says that the results of the inspection are not yet clear). Second, when any confidential information is published, the responsibility lies with the bearer of the information and not the news outlet…

And in this entire story, the most distressing thing is that supervising the investigation is RA Military Prosecutor Gevorg Kostanyan, who is also the Armenian government’s representative to the European Court of Human Rights (ECHR), and recently was appointed a member of the expert committee of constitutional reforms, an adjunct to the Office of the President of the Republic of Armenia.

Doesn’t someone who has represented Armenia’s interests for several years at the ECHR know these basic provisions on the right of journalists not to reveal their source? If so, then why doesn’t he do something to stop the investigator’s unlawful request? Doesn’t Kostanyan, who is very well aware of European rights, know that even if their desired decision is reached by all three levels of Armenia’s court system, they will surely lose in the European Court of Human Rights?