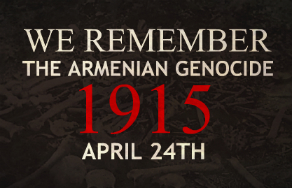 “Turkey, which has displayed strong will in its foreign political path, establishing no-problem relations and mutual trust with its neighbors, has yet been unable to make an important move only with Armenia.” – Hrant Dink

In 2010, during a meeting in Istanbul between Armenians and Turks, the Turks were continually alluding that the 100th anniversary of the Armenian Genocide is soon approaching and so a joint project needs to be developed. As far as we know, those remarks remained hanging in the air, but the reactions are heating up here, in Armenia.

Ahead of the 100th anniversary of the Armenian Genocide, a state commission has been established, which is going to coordinate all the events related to this day. The National Cinema Center of Armenia has received a large number of film proposals from various film companies and individuals. The council of independent experts have already selected 20 projects for 2013, the funding of which won’t be coming from the Center’s yearly allocated film budget. The synopses of these projects have been published in the newspaper Kinoashkharh (“Film World”).

Let us note that in the final list, there are both experienced and completely unknown and unfamiliar directors and scriptwriters, who, probably, have been inspired by the topic of the Armenian Genocide and the upcoming centenary. In the applications, sometimes only a scriptwriter is noted; sometimes, a production company; and in some cases, there isn’t even a director.

Mainly all the proposals make a historic excursion to the past — that retrospection goes back till 1896. Of course, it’s wonderful to travel through the halls of history, but it would be better if along with the proposals we were presented with their budgets, so that we understand to what extent each film evaluates its journey.

The first condition to shooting historical films is having a large and established budget; the second, having a professional film crew. Recreating historically true images requires large funds — costumes, decors, a large army of artists, and other many important things. In the proposals, there are adventurous nods to the past: battle scenes, massacres, migrations from city to city, country to country, and so on. All this costs money.

And the Armenian Genocide is not a subject matter that will be filmed and no one will know about it and it will pass. Are the directors and producers prepared to bear this formidable responsibility that emanates from their chosen topic?

I don’t know on what grounds the proposals were selected, but it would be good if, in this case, they relied on international practice in this field and along with scripts they required also the directors’ past works. The selection of works lets us know that this didn’t happen.

Judging from some of the directors’ previous work, it’s clear that they’ve never worked with artists. How are they going to manage the process of making a historical film?

For years we’ve been saying that our [Armenian] cinema is lacking professionals, that there’s no Second Estate (not to confound with the work of soap opera TV crews). Imagine: the producers of all these proposals decide to produce their films simultaneously. There would be a terrible deficit of professionals and equipment, but 2015 doesn’t wait. And the inclusion of professionals from abroad would increase the budget.

About 20% of the proposals begin the same way: “The film is about one family’s story…” and so on. Armenian TV stations every year on April 24 tell the stories of genocide survivor families; they make reports about them, produce made-for-TV movies. The same is repeated by the screenwriter applicants. Everyone, holding hands, is walking united on that road that TV stations opened in the last 20 years.

Armin Wegner appears in two of the scripts, while Soghomon Tehlirian, in a few of the others. In short, in terms of people known to the public, likewise there’s nothing new.

In general, the chosen topics are not original; let’s hope that their execution and film language will be. From the applications, 4–5 scripts could’ve been chosen, the amount due could be given to the production companies and wait for the results. All these projects can’t fit within a budget of one to two million euros, while how much money the state has foreseen for each of these 20 project is unclear.

Co-productions are also on the bill, which is beneficial. There’s hope that foreign production companies will find sufficient funds for the films. As for what the films without producers are going to do, this too is a big question. It’s nothing new that in cinema today (if the local market is not your mark) taking even a step without a producer or production company is simply impossible.

Let us turn to one project’s synopsis, which is seemingly different: EdgeArt Entertainment Inc. presents Artak Sevada’s The Genex film. “Tired of her family’s story for years, 25-year-old Sally Soghomonyan kept herself distant from the topic of the genocide, but when her father is killed, she finds herself in the center of a conspiracy. RIN-LAND corporation hides its participation in the Armenian Genocide, but Sally and lawyer Peter fight so that it [the corporation] fails to falsify history.”

This synopsis is different in its choice of story. Of course, the reverberation of the Hollywood action genre is felt, but what’s important is that the director doesn’t see the topic of the genocide and its resolution only in the past.

After all, through these films, we will try to persuade the international public to think about our culture and history. The upcoming films are not going to be decisive in Armenian-Turkish diplomatic relations, since the Armenian Genocide issue is the judicial, legal aspect of the case and the films will remain within a cultural context. But the test of the cultural aspects of the Armenian Genocide and the study of the references in the film will become an object of study.

Judging from the age of the directors and screenwriters of the proposed projects, I can tell that all are young and mainly from independent Armenia’s generation, but they have forgotten the time they have lived. It shouldn’t be forgotten that Armenian-Turkish diplomatic relations were put in motion after independence.

In the context of the Third Republic of Armenia, these relations have a 20-year history. But none of the applicants noticed this fact or they chose to ignore it. Mostly they went with known paths. They ignored Hrant Dink and his heroic struggle. Or that any of ASALA‘s activities could’ve been made into a tremendous film script. They forgot about “Football Diplomacy“. They didn’t recall that after the visit of our first and second president, only certain high-ranking officials from Turkey visited Armenia.

These are topics that seem to be no less important. In addition, contemporary topics reduce the costly recreation of historical reality, which would be good to consider in our country’s case. In short, so-called history has been interpreted largely one-sided and the lack of creative imagination is felt.

The topic of the Armenian Genocide is particularly explored in literature. If we examine Grigor Hakobyan’s research, it becomes clear that there are more than 250 accounts of references to the 1896–1984 incidents alone in novels in Western Armenian literature. In literature, creative works depicting calamity appeared. The term “catastrophe” literature came to the fore.

“Catastrophe” with its various synonyms became a creative metaphor in the literary process, the diverse artistic interpretations and readings of which completed and crystallized the new calamity literature. It should be stated that the writers of “catastrophe” literature were and are mainly Western Armenian artists.

Armenia entered the Soviet Union and for some time the topic was closed and was not expressed in cinema until the 60s. Only at the end of the 60s did the topic appear in Armenian cinema. Noted must be Artavazd Peleshyan’s monumental documentary Us (1969), where one of the topics is the Armenian Genocide, then Henrik Malyan’s Nahapet (1977), Zhirayr Avetisyan’s Miron Valley (1979–1980), Vigen Chaldranyan’s short April (1985), and Frunze Dovlatyan’s Karot (“Nostalgia”, 1990).

Abroad, independent of Soviet Armenia, the topic of the genocide likewise developed, and not only by diasporan Armenian filmmakers. In his film America, America (1963), Greek director Elia Kazan touches upon the Armenian-Turkish subject. (Let us not forget that in 1955, the disastrous fates of Greeks and Armenians once again intersected, during the Istanbul and Izmir massacres. The exact number of innocent victims is unknown to this day.)

The list of feature and documentary films is influential; you wouldn’t name them all, but none of these films reached exceptional creative saturation: we don’t yet have our Schindler’s List.

Filmmaker Thomas Arslan of Turkish origin, considered one of the German New Wave directors, in his documentary Aus der Ferne (“From a Distance”, 2006) clearly refers to the Armenian Genocide.

Another resident of Germany, talented Turkish filmmaker Fatih Akin, is preparing to film the feature-length film The Cut. It’s known that Akin inquired about the topic during a visit to Yerevan in 2010. There currently isn’t much information about the film, but we know that the filmmaker has gathered a large team of researchers who have been conducting research in the archives of various museums.

While Oscar-winner Shekhar Kapur of Indian origin, who is included in the 20 projects mentioned above and has great experience in shooting historical films, will begin the film Three Apples Fell From Heaven and according to reports, it should be completed in 2013.

Concluding the topic, without analyzing the undeniable role of the “Turk” in Armenian identity and of the “Armenian” in Turkish identity, I find it quite difficult to make reasonable proposals regarding Armenian-Turkish relations — more so in attempting to discuss the topic in a cultural context.