The ‘Mania’ of Armenia’s TV Companies: Attracting a Large Audience 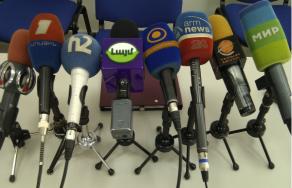 The global trend of the news media’s commercialization is certain also in Armenia’s case, including its television sector.

The commercialization of TV companies is current in Armenia, judging by the obvious entertaining and light genre of programming, which is commercial in nature and dominates airwaves today.

But in the opinion of the majority of media experts, there is no competition in any sector in Armenia except perhaps for IT, and the TV market is no exception. But if Armenian TV channels really competed on the standards of quality, then a TV station would attempt to cover an important news item in the country faster and with greater detail than its competitors.

But in Armenia this happens only in rare cases. I’m talking about news having a political disposition. No TV company plans on being the first in such cases; on the contrary, it waits to see what the other TV stations will say, how they will report it, in order to clarify its own position.

And so there can be no talk of a competitive market — either that, or TV companies’ approach to the market is elective; that is, they compete in certain domains, such as, for example, suing each other when a TV company exceeds the amount of permissible advertising allowed on air, or by producing similar programs, stealing audiences from each other.

Under such conditions, the only possibility experts see to becoming a competitive market in expanding the spread of the Internet in the television market. The current competition is characterized as having a political subtext, since the advertising market in Armenia is also politicized, and a TV company can have a certain part of that market if it’s loyal and controllable.

Thus, competition in the television sector can be viewed from two perspectives:

And if we are optimistic and consider that Armenian TV companies, nevertheless, compete to be a “good” TV company, then such attempts can be observed among only 3 channels — Armenia TV, Shant TV, and H1 (the state broadcaster).

This statement is substantiated by the picture of the distribution of the “advertising cake” (80% of this share belongs to these three TV companies). The success of two of the aforementioned channels (Armenia TV and Shant TV) can be considered their more successful business solutions arrived at over the years due to a clear and precise definition and positioning of business objectives. H1, of course, has a natural advantage in terms of funding, and position and influence formed in audience perceptions, as a public broadcaster.

Apart from the aforementioned three TV channels, attempts at competition can be seen also at ATV and perhaps in the policies of h2 (the state broadcaster’s Second Armenian Channel).

In Armenia’s TV sector, competition is mainly a struggle for advertising, which in the opinion of many experts is the most serious issue in the industry. The explanation is that advertising is the only source of non-politicized income for a news outlet.

The other option is to secure a sponsor, which assumes certain demands on content. Competition is for the audience; consequently, TV channels are selling their audience to advertisers.

The sociological research study showed that TV companies’ “mania” to attract the maximum audience doesn’t imply a commitment to become a better, higher quality TV company: having advertisers and funds is what’s important.

This premise is confirmed by results, which I will present in the next article.