Armenia’s Presidential Elections and the Media 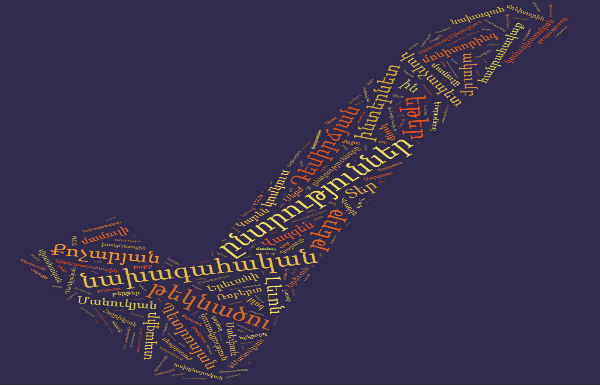 In the previous 5 presidential elections after Armenia’s independence in 1991, the role of news media has been of varying degrees.

The 1991 presidential election coincided with the revival of print media in Armenia — newspapers were influential then. Hayastani Hanrapetutyun, Azg, Yergir, Andradarts, Munetik, and other daily papers were able to influence public opinion. Independent TV stations weren’t yet established. Standing out from state television’s news and political programs was Haylur.

The work of news outlets during the Republic of Armenia’s first presidential election was observed by neither international nor local organizations. At that time, on a general wave of excitement, the role of news outlets was not as decisive in the matter of the election’s outcome.

The 1996 presidential election was the first for which the Central Electoral Commission gave journalists accreditation.

Elections were heated, and it was a tough fight also with news outlets. Particularly great was the role of television. Apart from unpaid airtime, candidates could opt for broadcasting paid political ads. The price of one minute of this type of advertising was the Armenian dram equivalent of $20 USD.

According to the results of the monitoring carried out by the OSCE’s Office for Democratic Institutions and Human Rights and the Yerevan Press Club, 84% of the time allotted to candidates on state television was given to incumbent Levon Ter-Petrossian.

The news program Lraber was clearly linked to Ter-Petrossian. Four days before the election, one of Lraber’s episodes (13 minutes and 40 seconds in length) was entirely dedicated to the incumbent’s activities.

In 1996, the state broadcaster actively advocated against candidates, reminding Communist Party candidate Sergei Badalyan of all the negative aspects of the Soviet Union and accusing Vazgen Manukyan of not solving the country’s problems during his term as prime minister.

Print media was already losing its influence. Average circulation fluctuated around 3,000 copies, while the overall print run of all daily papers in the country didn’t exceed 50,000. Especially in the regions outside the capital, the main source of news was television. On the other hand, in Yerevan, where opposition and independent papers were more widely available, opposition candidate Vazgen Manukyan beat the incumbent Levon Ter-Petrossian. Ter-Petrossian’s victory in the presidential election was also the result of the use of the state broadcaster’s potential.

The exceptional 1998 presidential election were covered by not only state television, but also other media outlets: A1+, AR TV, and Armenia TV were already broadcasting. During this presidential election, live broadcasting from the Central Electoral Commission and electoral districts to TV studios was available for the first time, while A1+ used mobile phones (probably the first instance of such use) to report the news.

According to the results of the monitoring carried out by the OSCE’s Office for Democratic Institutions and Human Rights in 1998, the state broadcaster openly backed the current prime minister, Robert Kocharian. In news programs, 42.15% of election coverage was devoted to Kocharian, with only 16.65% being devoted to the opposition candidate, Karen Demirchyan.

Advocacy in favor of the ruling candidate and against the opposition candidate on public television was more refined than in 1996. Television succeeded in depicting Robert Kocharian as powerful and humane, while portraying Karen Demirchyan as a candidate offering only memories of the past. This election emphasized the well-known assertion that the candidate who has more influential news media outlets wins. It was the state broadcaster’s unconditional support that helped Kocharian win the election in the second round.

The 2003 presidential election also happened in two rounds. This was the only election in Armenia’s history in which presidential candidates (Robert Kocharian and Stepan Demirchyan) who had made it to the second round participated in a televised debate.

Nearly one year before the election, A1+ had been deprived of a broadcasting license, which made the possibility of independent coverage of the election nearly impossible.

If in the first round TV stations were advocating for Robert Kocharian, in the second round they exhibited a change in tactics: TV stations moved to advocating against instead of for a candidate. The Yerevan Press Club’s monitoring group noticed, for example, that in the Mar. 2 broadcast of the state broadcaster’s news and analytical program Orakarg, Stepan Demirchyan was given nearly thrice more airtime than Robert Kocharian. But in 5 of the 6 stories and news pieces where Demirchyan was referenced, the context of the reference to him was negative and in only one was it neutral.

Meanwhile, in the case of Kocharian it was the opposite: in 5 of the stories the context was positive; in one, it was neutral.

According to the monitoring results, in the second round of the election, 69% of airtime on the state broadcaster’s news and political programs was devoted to incumbent Robert Kocharian, 93% of which was either positive or neutral. In comparison, opposition candidate Stepan Demirchyan was given 31% coverage, 67% of which was negative.

The 2008 presidential election caught our attention with a rich arsenal of alternative methods of coverage, the first of which, of course, was the Internet. Included in opposition candidate Levon Ter-Petrossian’s campaign team were young bloggers, who worked in the not yet as crowded but nonetheless more intellectual space of the Internet.

The number of news outlets covering the election online had also grown.

TV stations were mainly under the influence of the ruling authorities, which is why online news media as well as Ter-Petrossian’s campaign team began to use the opportunities afforded by YouTube. In addition, Ter-Petrossian’s promotional materials and news about his campaign visits were disseminated to voters through endlessly multiplying DVDs.

In the 2008 election, advocating against candidates was again in vogue. According to monitoring results, Public Television of Armenia’s Haylur news program, in particular, had covered opposition candidate Levon Ter-Petrossian the most — however, mostly in a negative light.

There was one other characteristic of the 2008 election campaign. According to the OSCE/ODIHR election observation mission report, footage from then prime minister Serzh Sargsyan’s rallies were aired with a one-day delay and images similar to one another were broadcast.

News media has always played an important role in electoral processes. And though, according to forecasts, the future belongs to social media, in Armenia at least, television remains the most influential media tool.

Gegham Vardanyan (video from A1+)