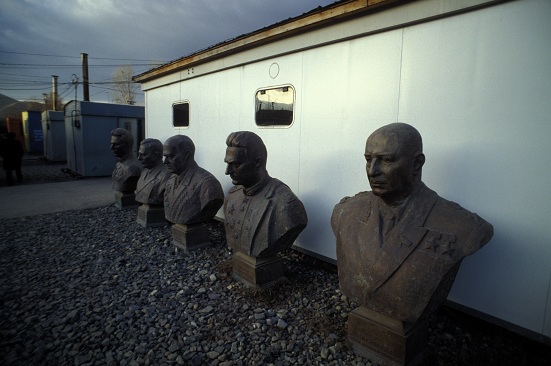 Among the thousands of reports on the subject of the earthquake there are facts, comments, and quaint expressions that evoke astonishment and sometimes even laughter, despite the tragic circumstances.

A Sovetskaya Torgovlya article titled “Misfortune is a Test of Strength” (M. Gurtovoy, Dec. 20, 1988) also could’ve been titled “Love and the Earthquake”. This is what Sergeant Oleg Poncharin, who distributed food from the field kitchen to Leninakan earthquake victims, told the newspaper’s correspondent M. Gurtovoy: “A girl approached. She was hungry. I was spilling the borscht; I couldn’t get my eyes off of her. Turned out she was a teacher; her name, Maria. Everything they [her family] had been levelled to the ground. I convinced her to go to my parents’ place in Pskov [Russia]. She’s there now. Soon I’ll be discharged [from the army]; I hope I will see her at home.”

Deputy Premier of the Soviet Union Yuri Petrovich Batalin compared the Spitak earthquake with Chernobyl in an unexpected way, while responding to the Molodezh Gruzi newspaper correspondent’s questions: “It was easier in Chernobyl. There, people had been evacuated, and their homes, properties had remained intact” (“The Poles of Tragedy,” Dec. 20, 1988). This made it easier to decide the amount of monetary compensation — what might be considered the positive aspect of the Chernobyl disaster.

Thousands of Soviet citizens offered their homes to quake victims, and there were also those who sought to be helpful by providing their experience and knowledge. Reserve Lieutenant Colonel Vladimir Nikolayevich Mokrousov’s letter to Chair of the Council of Ministers of the Soviet Union Nikolai Ryzhkov read: “Dec. 13, 1988. Tallin city. Dear Nikolai Ivanovich. There are no words to describe all the bitterness in my heart on occasion of the tragedy that befell Armenia. I don’t want to take up too much of your time, which even without this is insufficient for you. I want to give some practical advice to all who live in tents where the so-called Burzuika heaters are placed. In order to preserve heat those heaters have to be fenced in with rocks, which are plentiful in Armenia. By lighting the heater at night, one can sleep warmly the entire night. This has been tried over many years of service among the Armed Forces. Also, fuel is required less” (from Armenia’s state archives).

Ryzhkov 20 years after the earthquake describes why Mikhail Gorbachev didn’t continue his visit abroad and returned to the USSR, to Armenia:

“Here he asked me:

– What do you think, shall I now go to Cuba or England, or in any case, return?
I replied without thinking:

– Naturally, you have to return. And as soon as possible. You have to fly here, to the place of tragic events. These days you have to be near…

He arrived in Armenia on the morning of the 10th; it was a Saturday. He arrived with his wife, who accompanied him everywhere and always.” Later Ryzhkov called General Plekhanov […]

“Nikolai Ivanovich, what’s the condition of the runway in Leninakan? Can it withstand heavy aircrafts?

“Why tanks?” asked Plekhanov, ignoring my dark humor. “ZiLs, for Mikhail Sergeyevich and those accompanying him.”

And then I exploded. I swear, I shouted:

“What ZiLs? Don’t say such foolish things. There’s misfortune here, an ocean of human sorrow, international tragedy, and you’re getting ready to tour around in limousines? What would those affected [by the quake] say? Have you thought about it? No, Gorbachev will go with me everywhere — in a regular Ikarus [bus]. And his entourage, with him — there’s enough room for everyone; the bus is big. Is that clear?” (1988: Spitak’s Memorial, pg. 31)

Naturally, at the time these details weren’t known, but the people had a soft spot and special affection for Ryzhkov, which was expressed also in the publication of the book Great Friend to the Armenian People N.I. Ryzhkov (K.G. Khachatryan, Yerevan, 2004).

Historical excursus are found often in publications on the earthquake — earthquakes weren’t few in Armenia. What’s surprising is specific details are reported by non-Armenian authors. In the article “Pain and Kindness have Become Interwoven,” Oleg Gruzdilovich writes that when a thousand years ago an earthquake occurred in Ani, those from Cilicia went to help their compatriots (Belarusian newspaper Znamya Yunosti, Dec. 18, 1988).

Also referring to the historical past is another publication, the January editorial of a Turkish newspaper: In Milliyet, A. Oymen says the Armenians might react negatively to assistance from Turkey, which might worry the Soviet leadership, but Turkey has to be understanding and not incite a debate on why their assistance is not accepted.

Geography, as a topic, became an occasion for a fateful coincidence. “13-year-old Arkadi Manukyan has come here [to a Moscow hospital] from an Akhuryan small regional center. At that dreadful hour they [the students in the class] were studying geography, South America, speaking about earthquakes, that they don’t happen often. And suddenly there’s a tremor and the windows and walls shook. The teacher tried to calm the children: ‘Soon everything will calm down.’ But the boy got out of his seat and threw himself outside. He didn’t make it. A wall collapsed on his legs. The others died” (Socialisticheskaya Industria, I. Peshev, Dec. 14, 1988).

The article titled “Don’t Interfere with Rescuers” in the daily newspaper Vechernaya Moskva, asking Moscow residents not to go to the disaster area on their own, since only certain experts are needed, seems incredible compared with the current climate of nationalism and intolerance in Russia (Dec. 14, 1988).

Correspondent of the Russian-language paper Communist M. Grigoryan in the article “Instants that Cost Lives” (Dec. 16, 1988) drew attention to an interesting fact. It is self evident that all of Armenia’s hospitals were immediately overburdened after the disaster. But, most likely, there weren’t many free places, when under conditions of free medical care, patients stayed in hospital longer than they do today. Yet from the aforementioned article we find out that on the day of the earthquake, at the Institute of Medical Radiology “nearly all the patients had been discharged by 3 pm.”

The article “Trains are Supporters” (Dec. 19, 1988) in the same newspaper cites an example of an unusual clash of emergency and normal conditions. One of the most difficult issues those days was lodging and unloading trains full of “aid”. Meanwhile, it turns out that “after the earthquake, suppliers continued to send cargo to addresses even of demolished establishments,” which  “the country’s state supply service left to the mercy of fate in the station areas.”

Sovetskaya Rossiya daily published an article with the not very clear headline “Bread from Field Factories” (Dec. 14, 1988), in which rescuers (real foreign professional rescuers) become acquainted with a subtle aspect of the work: “The dogs have to be replaced every 10–15 minutes — their sense of smell goes bad.” This was conveyed to journalist N. Dombkovsku by head of the Swiss Catastrophe Assistance Corps Charles Radersdorf.

The abstract title “Loss and Pain, Faith and Strength” adorned the summary of poet Hamlet Karjikyan’s impressions of destroyed Leninakan [Yerekoyan Yerevan (“Evening Yerevan”), Dec. 15, 1988]. The writer’s eye noticed that “near a partly destroyed building the prospectus ‘King Kong is alive’ has remained intact.” The poster for a Bollywood film on another movie theater building is more telling: “Everything is dilapidated”.

A likewise writerly observation is required to notice that the disaster zone “is probably the only place on earth where a car bearing a red cross evokes a sense of joy — [it means] they’ve removed a person who’s alive” (Z. Balayan, G. Bocharov, Y. Rost, “Armenia: Tragic December,” Literaturnaya Gazeta, Dec. 14, 1988).

Meanwhile, the newspaper Soviet Karabakh, geographically more closer to the tragic site, despite reporting on Artaskh [Karabakh] residents’ total propulsion of intense compassion and assistance, titled one of its pieces “The Accident Won’t Suppress Us” (Dec. 10, 1988). As if we were talking about an automobile accident or a man who’s fallen in the river.

Classified among the list of odd published articles might be Armenian SSR Academy of Sciences correspondent member V. Khojabekyan’s lengthy piece titled “Though the Wound will Heal, the Pain will be Long” (Yerekoyan Yerevan), where the author describes what must be done to avoid a demographic “hole”. “… Glory and honor to those women, who though till the catastrophe considered the process of reproducing the number of their family members finished, after the catastrophe will resolve to grant the nation new children. Every woman up to the age of 49 can make this decision.” The thing is, the article was published on Dec. 16, 1988, only 10 days after the catastrophe, and it’s hard to imagine that in that hellish situation “every woman up to the age of 49” would begin to think about having “new children”. Though… perhaps I should make some reservations, considering the atmosphere of national unity during those days, when general problems had become a part of everyone’s day-to-day. As confirmation, it’s enough to remember that the first few days of the Movement, Armenia’s criminal underworld had declared a “moratorium” on crime, even providing assistance to rally participants.

Izvestiya correspondent Sergei Bablumyan, like several other writers, paid attention to the fact that if the earthquake had happened not at 11:41 but at 11:45, “the bell would ring; the days were warm, and the children would run outside” and how many would be saved (“Days of Sorrow and Courage,” pg. 28). This thought was probably in the air, since, as the writer confirms, “for Armenians, children are more sacred than all the gods taken together” (ibid.). The same book notes as well the figures of people dead that were circulating on the days following the catastrophe — 120 000, 170 000 (ibid., pg. 65).

Among the aid sent to Armenia were items that elicit surprise even today. From Latinform (Latvian news agency; currently, LETA) reports of those days (Dec. 9, 1988), we know that Latvia sent 30 000 pairs of shoes to Armenia and one… computer.

From the distance of a quarter century, seeming incredible is something that the media at the time didn’t cover because it didn’t consider it unusual. As a result of Deputy Premier of the Soviet Union Yuri P. Batalin’s Dec. 28, 1988 consultation, among the items required for 20 000 workers (5 000 vests and jackets, 10 portable toilets, and so on) were also 5 portable film projectors (from Armenia’s state archives).

Levon Javakhyan’s “Confession” [Grakan Tert (“Literary Newspaper”), Nov. 10, 1989] differs in its nature from all the other publications. He frankly confesses that he was so affected by the earthquake ruins that “he cried like a woman” but didn’t go to rescue people… and similar other “sins” that were typical of many decent people who by their nature were not proactive, but probably would yield to anyone in loyalty if someone else organized and guided them.

Journalist Narine Safaryan recently conveyed astonishing information to me. Before Dec. 7, 1988, she heard a broadcast on the radio that Tibetan clergymen predicted the earthquake and wrote a letter to Armenia that they’re praying for us. Let’s consider this series of articles an opportunity for those who might’ve heard the broadcast or know anything about it to leave a comment. I wasn’t able to confirm this information in media reports published at the time. The media at the time was working with templates of the Soviet past and making efforts to overcome them.

(The last article in this series coming soon)