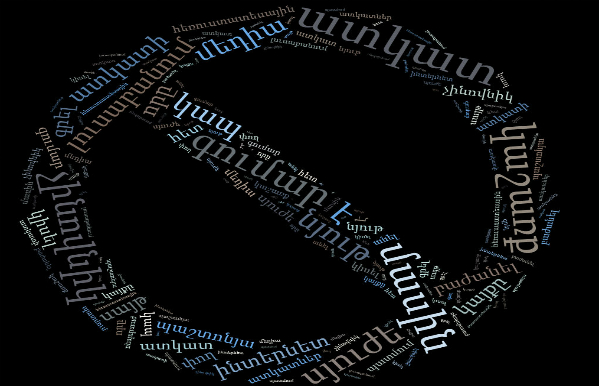 A clear tendency has become apparent in Armenia’s news media sector. On one hand, news websites are operating outside of control and at an unprecedented speed, while on the other hand, purely investigative journalism, which commonly raised, analyzed, and made a topic of discussion serious issues of concern, has become significantly more passive and inhibited.

Of course, these two trends are closely related, since when the number of information streams increase, then the current’s intensity inevitably weakens. Information, distributed among various news websites and social networks, loses its exceptional and compressed content just as the powerful flow of water is weakened, becoming multiple trickles.

Important events of concern are depicted and discussed quickly and in bite-size pieces, and these threads of fragmentary and current references immediately lighten the weight of information and depreciate the subject matter. News sites disseminate at lightning speed the same topics with practically the same words and the same amount of news stories (often not even proofread) that cover these topics. While the reader, searching the virtual space, literally gets tired.

The news becomes not a motive for investigation, but for a tweet, a Facebook status update, or the front page news of news websites. And in this new state, being constantly reproduced, republished and commented, one slowly disintegrates, weakens, and some time later, it begins to tire you and even get on your nerves.

It is commonly known that public interest in social issues begins to decline when mass media begins to more actively circulate these issues, being limited to superficial depictions. People get tired — tired of being concerned and sympathetic. The internal demand to reinterpret information lessens.

Recently, for example, one of the main topics covered in television, newspapers and websites was corruption and the fight against it. The Armenian president, later also the Armenian prime minister, publicly confessed that they’ve decided to eliminate corruption (especially, incidents of money laundering and bribery) from our lives. After this decision was announced, nearly all the TV stations and newspapers there was at least one report per day where uncovered and condemned were incidents of money laundering (in the National Library, the village school, the department distributing seeds, and so on). By the way, the incidents were the same.

It seems that each news media outlet can reveal new corruption cases and conduct its own investigation, especially since this subject is fashionable right now and there’s no lack of incidents of corruption. But the stream of news doesn’t reveal anything new; it simply highlights for a larger audience what is already revealed (by different state departments).

And so, after one month of seeing, hearing, and reading about the same cases of money laundering in the news, the public involuntarily becomes acclimatized to not only this phenomenon, but also the odd word money laundering (atkat) — especially, when it is constantly heard from the lips of high-ranking officials.

And when the audience is already accustomed that there won’t be any new scandalous revelations and it’s being served a multi-episode corruption show, it begins to either “savour” (an unhealthy, apathetic condition) or ignore (a self-defense reflex) the flow of news.

And an indifferent person who practices self-defense no longer feels the need to obtain and analyze information himself, becoming much more predictable and manageable.

It turns out the more often Armenian news websites and the online versions of newspapers and TV stations only on the surface address really important issues that require in-depth analysis, the more insignificant the analysis becomes.

In the past, it was mainly television that made important and controversial information digestible and into entertainment, while now websites do that work more successfully.

There isn’t even a need for censorship (or its more inventive, cunning alternatives), since the free, fragmentary, entertainment-like news stream is a much better censorship trick than a tough ban or delicate control.

Sometimes freedom is the best censorship. And it seems the structures coordinating news outlets’ work have understood this quite well.