Armenian Media Turns its Attention to Fate of Buildings 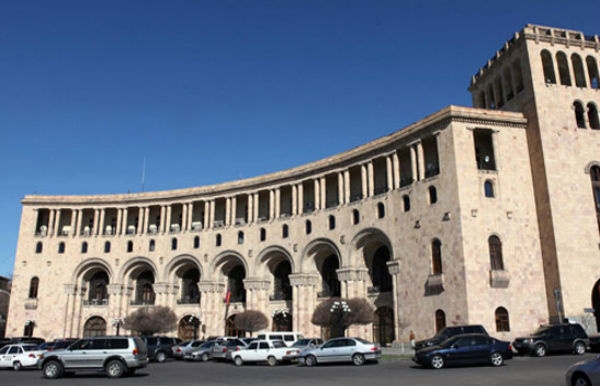 The news about selling the RA Ministry of Foreign Affairs building immediately ranked among the top news, especially because the building will be made not into a cultural center or a museum but a hotel. Of course, Yerevan residents are interested in the building’s fate — after all, hasn’t it become an inseparable architectural part of our city’s main square?

The daily paper Joghovurd, for example, responded very sharply: “Well, of course, after the disgraceful story of Ramil Safarov’s extradition, that ministry could be shut down altogether.” While Haynews.am simply welcomed the decision: “Soon the Ministry of Foreign Affairs has to move, and all state departments, on the whole, should be removed from the center of the capital.”

Probably, indeed, it’s time to free Republic Square from existing obstructions, especially since Yerevan’s main streets are often closed in honor of high-ranking officials who visit the city. However, the decision to turn the foreign ministry building into a hotel will hardly foster the elimination of traffic.

Of course, news about the sale of the building wasn’t “a thunderstorm in clear skies” — one could’ve read about it on the Government of Armenia’s official website. Generally, transactions of public significance now are publicized online and are available to all, including journalists.

The situation before was completely different, and news outlets were forced to investigate to find out who was behind the deal, for what price was it sold, and how are they planning to use some purchased building or another.

A vivid example of this is the relocation of Avetik Isahakyan Central Library, which was originally located at 2 Amiryan Ave. and was of historical and cultural significance. In its place now is a Unibank.

Haykakan Jamanak reporter Anna Zakaryan, in a Feb. 6, 2009 article titled “Will they take possession of the library building?”, conducted an actual investigation to find out who bought the building and to where the library would be moved.

In the article, library manager Hasmik Karapetyan even stated that she’s sure that the move is temporary, and after renovations the library will return to the same building. Even till the end, Unibank’s management was promising to renovate the building and then return a part of it to the owners — that is, the library.

But future developments proved otherwise: no one was preparing to refuse that “delicious morsel” — the building. That time even MP Arshak Sadoyan backed the library staff but to no avail: the library was relocated, and the building, privatized.

According to a 2005 government decision, around 1,350 square meters of the building at 2 Amiryan Ave. was taken from the Avetik Isahakyan Central Library and given to the management of the state property management department. Later, it was permitted to sell the property to the previously known buyer, Unibank Ltd.

The public first found out about this transaction after the intervention of journalists. Also conducting its own investigation was Noyan Tapan (“Noah’s Ark”) news agency, stating that according to the municipality’s decision, in 1998, Credit-Yerevan bank was permitted to reconstruct the building, build another storey, and then exchange space with the library.

Accordingly, the 3rd floor was to be provided to the library, while the first floor and basement, to the bank. Credit-Yerevan bank, however, went bankrupt, and its portion was sold to a Russian importer, which planned to build a large business center, investing about $30 million. It was assumed that the money would be supplied by Unibank’s founder and resident of Russia Gagik Zakaryan.”

Earlier, in 2003, nearly the same fate befell the building at 17 Tumanyan Ave. that housed the main editorial offices of the Armenian Encyclopedia. Inecobank took possession of the building.

Till today, details of the transaction selling the building that housed the former Central Department Store located on Abovyan St. to Aram Abrahamyan, head of the Union of Armenians of Russia, are unclear (there’s practically no attention in the media). No one is explaining why construction has halted.

Generally,  in Armenia, construction and journalism have very interesting relations.

For example, one day (in 2006), there was no longer the well-known Yerevan Youth Palace, where the youth of our generation had fun (there was a night club), received marriage certificates (the registry was located there), and learned how to swim in the pool there. Now the building has been razed to the ground.

According to Panorama.am, the 4.5-hectare area belongs to Avangard Motors, which purchased it in a bid in 2010. According to a Japanese plan for the site, an Intercontinental international business center with a hotel complex, residential buildings, and underground parking for 2,000 cars was to be built there.

The entrance to the construction from Teryan St. was planned to be built with escalators. And all this was to have been built in 3 years, with completion in 2013. But no construction work has taken place on the demolished Yerevan Youth Palace’s site.

Also incomprehensible is the fate of Sevan Hotel, built in the 1930s and demolished in 2004 based on a decision by former Yerevan mayor Yervand Zakaryan. As reported by Panorama.am, the current owner is Carousel Establishment, the head of which is wealthy British-Armenian benefactor Vatche Manoukian.

The area is currently surrounded by a metal barrier. There have been meetings between city hall and Vatche Manoukian (in any case, during the previous mayor’s term), but the demolished hotel’s fate is not clear from the municipality’s official statements. It can be assumed that this matter will soon be resolved, since the area is set to be used for other purposes (the foreign affairs ministry needs a new building).

The once-beautiful Dvin Hotel occupying 1.5 hectares of land in Yerevan’s Kond neighborhood is in the same uncertain, ambiguous state. In 2003, the hotel was sold for $3 million to the Caucasian Communication Group, one of the owners of which, according to media reports, is famous Russian singer Iosif (Joseph) Kobzon.

The purchaser had promised to build a five-star hotel within 5 years, investing at least $30 million, but no serious investment has yet been made.

As you can see, urban development issues have always been in the media’s attention. Even when state agencies were trying to stifle information, all the same, it became available. However, in this matter, what’s important is not only being the first to announce the news, but also following up and presenting all the stages of the “shady” deals.

It’s preferable not to let the topic leave your attention and to continue the media investigation.

I think, turning our attention to cases of the privatization of state buildings is current also today.