Haykakan Urbat: An Open Forum or a Private Club? 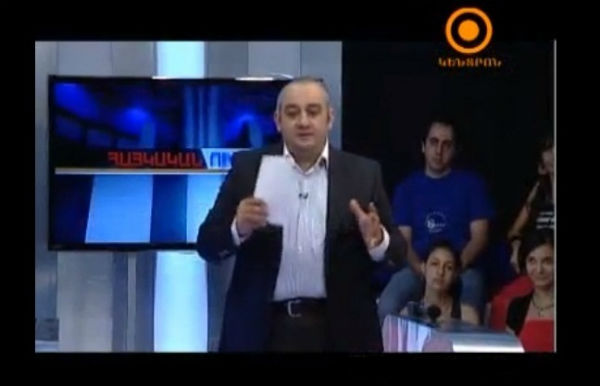 As a rule, the topics discussed on talk shows produced in Armenia are “safe.” Despite the desire to be “scandalous,” the most daring topic such shows allow themselves to raise is the tradition of the red apple — pre-marital sexual relations.

If we observe the talk show’s traditional format (the participation of a host, guests, an audience), then the Haykakan Urbat (“Armenian Friday”) talk show is perhaps the only sociopolitical talk show of public significance on Armenian airwaves where topics of debate are not only political processes, but also news of important public significance. It went on air during the heated parliamentary election campaign period earlier this year and provided interesting televised debates to viewers.

On the last day of the National Assembly election campaign period, political parties and MP candidates had the opportunity to sum up their campaigns live on air. And after the elections, the results and post-election moods became a topic for discussion on the show.

The topic of the televised debates were various — from the debate on socialism or liberalism ideology, to the bombing of DIY night club and the resulting developments. Besides the diversity of topics is the diversity of format. Talk shows having public significance can be divided into two types: those in which guests having opposing views get into a heated debate and those where a discussion takes place. Haykakan Urbat offers both of these formats.

The topics of the first two shows of the new season clearly reflected this difference. The topic of one of the shows was “Euras-I-a” where “pro-West” and “pro-Russia” guests debated, while the other show was “Hungary extraditing Ramil Safarov” and despite the different views aired, there was no heated debate but rather a discussion.

During broadcasts of topics that elicit a discussion, talk show host Petros Ghazaryan tries to set the stage through forming the questions, placing guests before a dilemma, and provoking debate, but usually he doesn’t succeed.

During the show, only those who are “known” have the right to speak — the guests, some of whom are involved in Kentron TV’s other programs or prior to appearing on the talk show were regular guests on Ghazaryan’s other show, Urvagits.

A Haykakan Urbat audience member doesn’t have the right to ask a question or state an opinion and can express himself only through clapping and exclamations in the studio.

In those broadcasts in which guests having opposing views participate and a heated debate occurs, audience members, according to the format rules, are clearly divided into two camps and express themselves through clapping and calling, while during more discussion-oriented topics, the audience is relatively passive.

If during a broadcast with a heated debate the presence of audience members is justified because it conveys an emotional background to the show, then during those broadcasts containing a peaceful discussion, the audience’s presence becomes irrelevant.

There are similarities between Haykakan Urbat and Urvagits (the host’s style, the selection of guests, and son on); however, Urvagits differs in a positive way from Haykakan Urbat: in Urvagits, though mediated, TV viewers can post questions and express their opinions.

The lack of interaction, the absence of feedback, and the same circle of guests are the show’s shortcomings. Haykakan Urbat can become an open forum, but in this way, it more so reminds one of a “private club.”