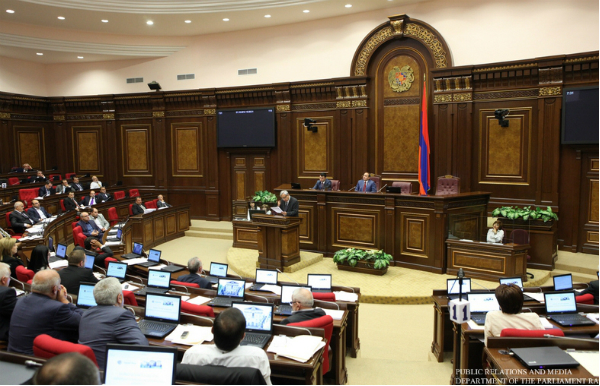 All local TV stations covered the parliamentary hearings concerning the case of Prosperous Armenia (HAK) MP and former foreign minister Vartan Oskanian clinging purely to the “exchange of fire” between the accuser and the accused. However, all the television networks made an omission in the revelations occurring “backstage” — in particular, opposition Armenian National Congress (HAK) MP Nikol Pashinyan’s accusation against Prosecutor General Aghvan Hovsepyan related to his company car.

Note, Armenia’s National Assembly on Tuesday lifted Oskanian’s immunity, allowing law enforcement officials to prosecute him on fraud charges. As reported by RFE/RL’s Armenian service, Oskanian is now expected to be formally charged with misappropriating a $1.4 million donation that was made by US philanthropist Jon Huntsman Sr. to his Yerevan-based Civilitas Foundation in late 2010.

Shant TV’s Horizon news program isolated Pashinyan’s out-of-context remark directed to Oskanian that “when I heard that the Huntsmans transferred $2 million to you, I was astonished. You were foreign minister for 10 years and possessed state secrets.” The news outlet, which isn’t a state news outlet, in this way attacked the MP’s position, preferring to cite a scandalous fact about the same MP. If the news outlet wanted to destroy Oskanian so much, it could’ve used the other remark by the HAK MP against the BHK MP: “Were your, [former president] Robert Kocharian’s and law enforcement bodies’ actions on Mar. 1, 2008, law abiding, and aren’t you preparing to transfer that $2 million to the families of the victims of Mar. 1?” Is it populism? Who decides this?

The state broadcaster’s second channel (H2) turned its attention to the political persecution. However, it too remained silent on Pashinyan’s charges against the general prosecutor accusing Oskanian. No one approached the chief prosecutor to find out to what Pashinyan was referring. All were satisfied with the accusation and with the already launched criminal case. Why? Because journalists went after a ready-made story; they didn’t try to understand an accusation for which they weren’t given much detail. They didn’t try to make an effort.

The TV stations I’ve listed have a reputation of being the leading networks in the country. They certainly work towards improving the ratings of their programs, as well as their news. None displayed an interest in broadcasting the parliamentary session live. That this is a question to be regulated by law is not ruled out.

But where else can the question of depriving a member of parliament of his immunity be raised if not in parliament? It means that TV stations have to show an interest in covering parliamentary sessions; I’m certain, no one will prohibit this, even if the law is silent on this matter.

It’s known too that yesterday’s session was broadcast on the National Assembly’s official website (www.parliament.am). One of my journalist friends on Facebook noticed that the parliament’s website was never in as much demand as it was yesterday. That is to say, depriving a former foreign minister from his parliamentary immunity is not something that happens every day. If a journalist can’t do her job well at a public event, how an event or another can be understood is left up to the public. We (journalists) not only didn’t “serve up” the event to the public, but also described it, which all the websites ahead of the TV stations had already done.

The result is that TV stations withdrew coverage of the charges against Oskanian and his plea from a near-accusatory tint, of which at least two people Nikol Pashinyan and Aghvan Hovsepyan, couldn’t have come out untainted, thanks to TV stations: The former should’ve responded to defamation (if he was defaming Aghvan Hovsepyan), while the latter should’ve responded to charges of embezzlement or appropriation (since he has yet to deny numerous media reports that he transferred ownership of his company car to another).