No News without Propaganda 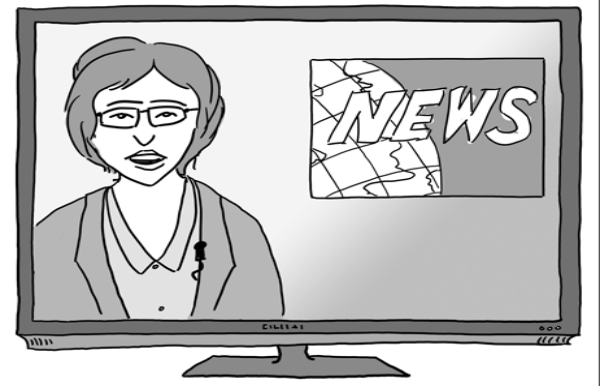 I found out on Monday, Sept. 24 that for Armenian TV stations, more important than the grape harvesting process were elections of the local self-governing authorities, which, depending on the influence on the TV station’s coverage, had either a Prosperous Armenia party or Republican Party of Armenia tint. In any case, everything passed without violations, especially when the Council of Europe’s observation mission’s press conference was being cited.

And finally, the prime minister presented in the National Assembly the report on budget performance. It seemed to me that I was a citizen of Switzerland. Yerkirn Aysor hinted only subtly and briefly about certain aberrations during the grape harvesting and the local elections. Only from Ayb-Fe did it become clear that the events were taking place in Armenia — there’s still much to be done to register economic growth and in the elections.

In the graph above, only those news items that were broadcast on more than three channels are noted. The order in which the news item was broadcast can be judged from the x-axis.

It was interesting that apart from A1+ and Shant TV, busy promoting one of its own programs during its main news broadcast, the rest of the channels covered the RA State Commission for the Protection of Economic Competition uncovering fraud in the food companies that service kindergarten schools. It was a classic example showing that news providers truly serve the interests of the agency in question and not attempting to comprehensively expose all the sides.

With the light touch of local TV stations this too was added to the list of superficial news declaring the “fight against corruption” but often billed as “performance”. Actually, the funds from the state budget allocated to kindergarten schools (that were squandered) are negligible and were begun under a pilot program.

Meanwhile, kindergarten schools have been financed by local community budgets and from collected leases. None of the journalists who covered this news attempted to ask questions and understand why the Commission didn’t conduct additional monitoring of extensive purchases in the same sector, how many kindergartens are there in the country, and in how many were such violations found, in which communities are these establishments being financed from the state budget, and so on.

It seemed to me, like an obedient dog, TV stations’ editorial staff are being led by the nose (made a fool of). Yerkirn Aysor had even invited to its studio an expert from the Commission and ensured supplementary promotion. I hope, unlike this unpaid advertising and the loss it incurred, the TV station offset with its broadcast of the “news” on the rock concert sponsored by Converse Bank.

I pitied my time watching these TV channels. As a rule, not much was conveyed from real life. Even if such fragments found their way to the news, according to idealogical orientation and the journalist’s taste, they were peppered with and accompanied by appraisals.

Distinguished from other days’ observations are Kentron TV’s Soviet and Yerkir Media’s lyrical styles, which are contradistinguished by A1+’s comprehensive and concise factual statements. Of course, “taste has no friends” but for maintaining journalism standards it’s necessary to mark Ayb-Fe where, as a rule, the news broadcaster doesn’t (simply) recite and an attempt is made to present the opinions of all sides. 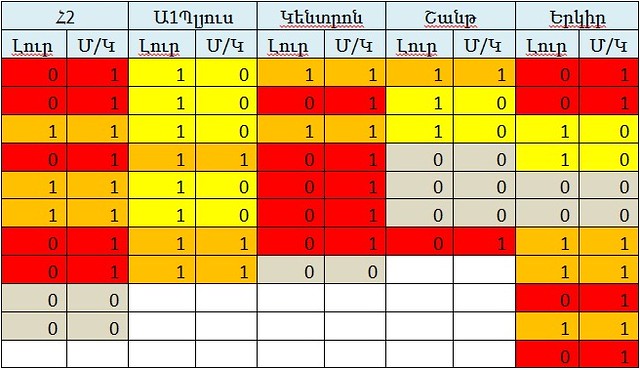 Note: A news item was given a “0” if it was conveyed solely or largely by the TV broadcaster or author of the report; a “1” if at least one of the sides inherent in the news item spoke about and presented it. Apart from this, impartiality and presenting more than side were assessed: if the news item included only one side’s story (and didn’t present the other points of view) it was given the “one-sided” label (O/S) and rated as a “1”; whereas if it was multi-sided, it was given a “0”. Furthermore, broadcasts containing propaganda (preaching, advocating) are highlighted in red; those containing propaganda tricks, orange; those offering news; yellow; and those broadcasts having nothing to do with news, grey.

From this perspective I tried to observe the degree of impartiality and existence of news in the main news programs on Monday evening. All instances where the news was largely or solely reported by the journalist or TV host were rated zero, since direct participant groups were not represented.

On the other hand, if only the point of view of one side was presented, the news was deemed one-sided and given a one. As a result, the worse offenders were characterized by a 0-1 pairing while those that were impartial, objective, and multi-lateral were distinguished by the 1-0 pairing. A 0-0 pairing means that the news could not be considered news per se — for instance, it was promotional “news”, news about death (not so easy to evaluate), or major international news (and thus, not the TV station’s own news story).

From those highlighted in yellow, Ayb-Fe was distinguished for having more good-quality broadcasts, which were offset by Kentron’s propagandist and slanted news coverage. Between these two, in order of best to worst, were Yerkirn Aysor, Shant TV, and finally, Lraber.

It only remains to hope that in striving for equality, we won’t be distinguished in the tendency to equate the good with the bad, but the opposite — by following the best example that is constantly improving — we will gradually get rid of the coercions of politicians and tasteless propaganda. 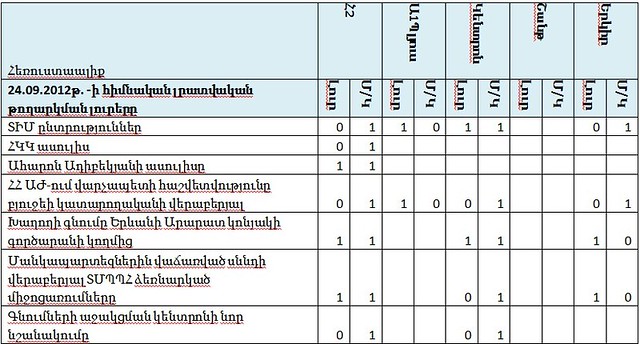 More detailed charts and figures can be found here (in Armenian only).

The first part of this report can be read here.