Stone Messages of a Stone Age 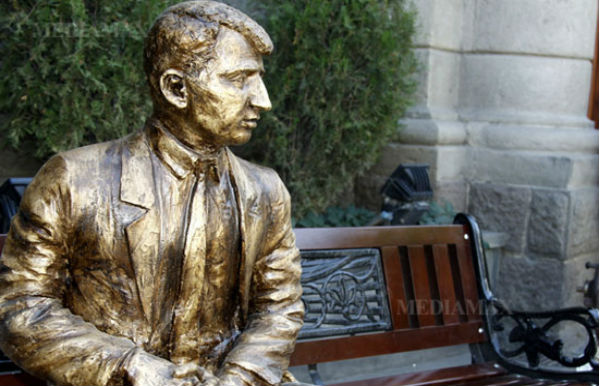 The only media tool accessible to people in the primeval ages was images. Our ancestors decorated cliffs and rocks not only to satiate their thirst for their own aesthetic, but also to convey something to their surroundings. More specifically, they took a wedge and carved images on the walls with the desire to inform those less informed and convey their knowledge and experience to the unexperienced.

Let’s not forget that words didn’t yet have the impact of a simple and understandable image done with a few strokes, which needed no translation or decoding. Finally, cave paintings were the first information transactions through which information had a visual appearance, while life’s accumulations were put into circulation.

Later, as a more stable and lasting media field, the stone itself became visualized — by way of a statue, sculpture, or bas-relief. Stone (and later clay, marble, and bronze) replications of scenes from life were public messages about the beautiful, the dangerous, and the important. Images helped in the spread of information and contact.

Thus, when man was added to stone, the first news outlet was created — stone with the appearance of a replica of life and implying comments and additions (which, by the way, operated much like today’s social networks — you have something to say, add it yourself).

Centuries have passed, and technologies were born, developed, and died, but stone (clay, marble, or bronze) continues to remain one of the most important means of conveying information. And the city, which erects sculptures in its streets and parks, becomes a unique news outlet, which describes to its residents and visitors important, dangerous and beautiful things from its viewpoint. It does this through sculptures, statue clusters, posters and other types of external design.

But that which Yerevan describes is odd, superficial, and one-sided. What’s odd is the role of stone works, which is limited by the mission of being not a message, but an imitation of a message. In truth, the urban sculptures don’t tell the history of the city but the history that officials responsible for the image of the city want to hear.

The city with its city hall and different art councils imposes one “stone” history, while residents understand and accept that which is described on the contrary.

Recently, city chiefs (city hall employees) began to decorate Yerevan anew, wanting to beautify the new large number of identical benches in the city with statues of famous people in the arts and literature ahead of the city celebrations. This project was called “Our geniuses are with us in the city of Yerevan” and immediately (beginning from the first two statues erected) led to backlash from Yerevan residents.

First, a part of actor Mher Mkrtchyan’s bronze-tinted imitation clay hand was broken, then famous poet and writer Yeghishe Charents’ statue was vandalized, with which the group of youth taking photos acted quite inappropriately, hitting the clay poet’s head (the video was uploaded on YouTube but later removed).

The statues of great men have only one function: they are a background and an object with which to be photographed. And it’s not at all surprising that the “postcard” statues, outside of the city context, built on a distorted scale but in the style of social realism and erected only to be photographed, are viewed as an out-of-place phenomenon. Or a foreign element.

Just as, for example, printing “yellow” news in the pages of a newspaper having a long life and a good reputation. Yerevan’s features are gradually becoming more blurry and the city is turning into a varnished surrogate space, where clay is portrayed as bronze, and art is given a decorative role.

When anything is done just to be a beautiful adjunct and bears no semantic weight, its either pushed out of the field — broken, shattered or pulverized (since the beautiful in art’s function is of the least importance) — or it begins to transform the entire field.

People who live in Yerevan begin to resemble their city and acquire the appearance and behavior of the capital. It’s sad, of course, but the Yerevan residents vandalizing sculptures are the birth of the Yerevan that was “beautified” and built with great vigor in recent years.

As did Yerevan, so too Armenian television became entertainment, light, superficial, and fit to create images only of daily life. Did you sit? get photographed? laugh?… Well then go home — to sleep. And if suddenly you break the sculpture’s fingers or behave negligently, we’ll punish you.

In order to punish offenders, Yerevan City Hall decided to place video cameras next to each statue and control unbecoming behavior. This is a gift to our city, which is also trying to play an educational and disciplinary role.

When prehistoric man was cultivating stone and conveying what he had to say to his fellow tribesmen, he was carrying out an order which was embodied according to his taste and ideas. But whose order is Yerevan carrying out? Definitely not Yerevan residents’, who want a lot of other things from their place of residence. Just as, perhaps, they want something else from their television.

But so it is that a sculpture is reserved the role of an adjunct or an appendage and not that of the actual message. The message is formulated very abstractly (“Yerevan is our home”) and the sculptures created by a state decision become mere measured creations, an imposed “gift” and “ornament” from the authorities to Yerevan residents, which is nothing other than an imitation.

We pretend that Yerevan is our home, while those ensuring Yerevan’s decoration pretend they want to create a kind and smiling environment.

In the outcome the city turns into a tasteless, negligent market. Or a “yellowed” news outlet, the market consumption news of which we read and easily toss aside. We have our photo taken with the sculptures and move on.