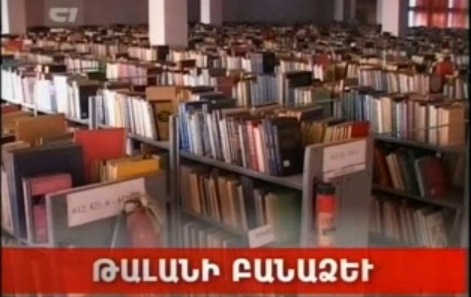 Like literature and art, journalism should probably stand the test of time. This is how I, in any case, relate to my articles. I decided that one of these, however, didn’t stand the test of time when Armenian President Serzh Sargsyan addressed the government at its meeting last week. I’m referring to my article “Cold, But National” [in Armenian only], which was published in the local daily paper Haykakan Zhamanak (“Armenian Times”) last December and refers to the National Library of Armenia.

Here are a few excerpts:

“Since in our country the problem of heating has long not been considered pressing and isn’t discussed publicly, I thought this must be a new state program — they want to freeze [i.e. cryopreserve] Armenia’s best minds, which, according to general opinion, are the greatest treasure of our ancient country, for the future. I have long read about such practices…

“These haven’t yielded results abroad since they wanted to wholly freeze a person, but the difference in the practice in Armenia, I assumed, is that the brain is frozen inside a person’s head…

“But troubling me was the thought of what would happen to the (mainly female) library staff, who for the whole day are wincing from the cold, understandably not having a high salary, and serving Armenia’s scientific minds to be at a respective high level prior to being frozen.

“Warmer conditions have to be ensured for them; otherwise, as long as scientists are not athletes (they’re not known for their strong health), over the course of one winter, it might be that they may not freeze and vanish for the future, and it will be necessary to freeze those remaining the following winter. Or, new superior brains will come forward, which will prefer not to rot away or will find another use for themselves other than taking the library path.

“And a final concern: What if those people to whom my remarks are directed in the first place — the culture minister, the library’s director, the prime minister — suddenly pay attention to my letter as a piece of literary work…? So, let me say it for them in simple words: In the best case scenario, in the National Library’s [Bibliography and] Scientific [Research] Department it’s possible to sit for half an hour without a coat and, depending on one’s gender and age, no more than two hours with a coat.

“In the press department, it’s crazy to take off your coat and the longest you can sit with a coat is 45 minutes. But don’t think that you can walk, move around and get warm for 15 minutes in the corridor and continue working since it’s cold like the netherworld in the corridor.“

There was no response. I was sick over the New Year’s holidays as a result of the low temperatures at the National Library. When one month later I was able to go to the library once more, it was a few degrees warmer in the reading room. I got the impression that the management had assigned shifts to the staff to turn up the heating in the science and press departments once they see me coming from the window. And possibly on account of the director’s personal savings. Because visitors and the library staff tolerated the cold and the warmth with the same uncomplaining humbleness.

As in the old and at times good Soviet times, the Sunday broadcast of Arachin Lratvakan (the Armenian state broadcaster’s news program) supported the speeches of high-ranking officials.

Now is the time to ask where was Armenia’s Public TV broadcaster, which complains that budget monies have been squandered? Where were the public relations departments of the prime minister’s office and the president’s office, which didn’t show an interest in the deplorable situation described in the article? At other times, they talk about constructive opposition… about how good it would be if it existed, right? But the article was not an accusation of rigged elections or treason to national interests. Wasn’t it an issue that would implicate constructive opposition?

This is the reason that no one is satisfied with the level of freedom of expression in Armenia: the entire criticism of opposition news outlets, substantial or not, is only a mission to calm the hearts of their compulsory small audience.

While the pro-government news outlets, being much more informed of the work of government bodies than the opposition news outlets, know that high officials are always behind large or small economic crimes: they don’t even try their luck in exposing them. Until the fateful moment doesn’t come. Until the bell doesn’t toll. Until Serzh Sargsyan doesn’t speak.