Journalists and the Intelligentsia 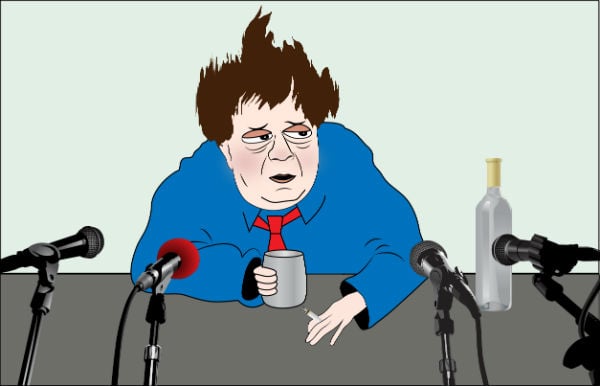 Journalists in Armenia complain the most about the intelligentsia, but with or without a reason they always contact them to get their opinion on some issue or another.

In Armenia, first and foremost considered intelligentsia are writers, including poets. Painters and sculptors likewise. And film directors and actors. More rarely, scientists. Even more rarely, representatives of exact sciences. And practically never, doctors, teachers, lawyers, economists and representatives of other sectors engaged in intellectual work.

That is, in our country, those most considered to be intellectuals (intelligentsia) are artists, whose work is connected more so to emotions than to thought. Or, in the best case scenario, it’s a 50/50 split.

And usually, local journalists more often contact artists with the most serious issues concerning them and the nation, forgetting that artists, especially the most talented, are individuals who are mainly self-absorbed and more or less deviated from the norm; meanwhile, local journalists rarely contact the genuine intelligentsia (scientists, lecturers, lawyers, and so on) with serious questions, and by saying serious questions, I mean first of all our national, political and domestic issues.

And they contact mainly artists who are pro-government or opposition, and though our journalists and non-journalists believe that artists have nothing to do with the National Assembly or politics, nevertheless, they constantly appeal to artists with political and especially national questions.

And the latter, with false humility, aren’t particularly striking and immediately respond to any journalist’s questions, and in many cases they answer these important and serious questions in cafes or art studios in quite drunken states.

And the journalists too are not at all repulsed by artists ready to respond to serious questions while drunk; in fact, the not-sober responses of drunken artists are quite beneficial for our journalists because, as a rule, an inebriated poet or visual artist is more eccentric, more audacious, and more in opposition, and as a result, the interview becomes more poignant and interesting.

And in these cases important issues concerning the nation are quite easily and at the same time lightly solved. The exclusive story is ready, the parties are quite satisfied and, in a spiritual sense, satiated.

And if I hadn’t seen such cases with my own eyes I wouldn’t write about them now, but, on the other hand, it is quite natural and logical that local journalists mainly interview writers and artists because art is available to all, especially to journalists; anyway, it seems that way to everyone, especially journalists.

And probably that’s the main reason that our journalists interview mainly writers and artists because interviewing actual and real intellectuals (doctors, teachers, lecturers, lawyers, economists, historians) requires some preparatory work and certain knowledge, whereas you can ask artists any question about politics, the nation, and anything else, and they will answer resolutely and without hesitation because they too have become convinced that they are the symbol and embodiment of the long-suffering nation’s intelligentsia. And what’s interesting is that everyone believes this already.