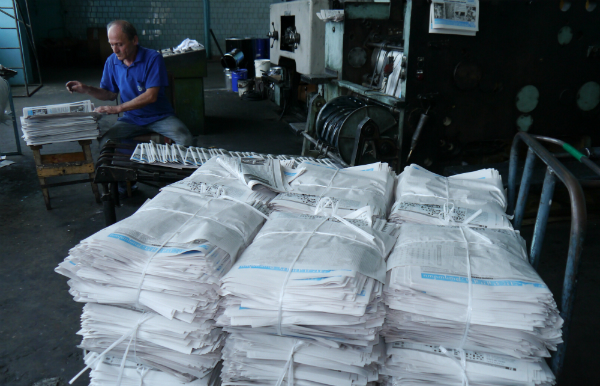 According to the RA Ministry of Justice state registry, as of Jan. 1, 2012, there are more than 1,000 print media officially registered in the Republic of Armenia — 825 daily and 388 monthly publications.

It’s quite difficult to understand how many papers are printed daily in Armenia, since the actual print circulation audit is outside of the jurisdiction of state agencies. Newspapers are registered and recorded in the RA Ministry of Justice’s state registry and work according to a principle of a “floating” print run, signing individual agreements with printing houses.

This means the circulation figure printed in the newspaper’s pages might not correspond to the truth — and usually that’s the case. The decision to be honest or dishonest in this matter depends on each paper’s degree of conscientiousness (as well as boldness).

The RA Law on Mass Media, among other things, requires print media outlets to include also the total number printed of the current issue. The print run is usually noted on the newspaper’s last page in small numbers.

And since newspapers pay taxes based not on their declared but on their sold copies, many papers act quite freely with circulation figures. Each day from the printer newspapers can request different quantity print runs (which depends on the importance of the stories published in the paper, the season, the days of the week and other factors).

Some dailies don’t even note the number of printed copies, though they’re obliged to do so. This is the case with, for example, Hayastani Hanrapetutyun, and lately also Aravot newspaper. Some newspapers slightly (or significantly) increase the declared print quantity. That is, the paper declares a certain figure to its readers while requesting a completely different quantity from the printer. And sometimes this difference can be the addition or removal of a zero.

Actually, newspapers do this not to intentionally confuse readers, but to create (and sometimes to maintain) an image. If you print many copies then you have readers. And if you have readers then you’re a news outlet in demand and you can be pleased with your work. This message is first directed to the paper’s sponsors, advertisers, as well as those political forces and the wealthy who “collaborate” with the paper by openly or covertly financing it. And it’s normal that chief editors are inclined to note a bigger print run than they’ll actually print and presumably sell. And if they don’t want to deceive readers, diplomatically they won’t note any numbers. That’s approximately how Aravot operated, which initially declared its real circulation figure then stopped doing so.

The existence of two circulation figures is perhaps conditioned by the apprehension of newspaper owners, who are concerned that noting the actual figure will show the poor condition of newspaper sales, which in turn will negatively affect relations between editorial staff and funders. In any case, in Armenia there are many papers that from their first issue declared they print 4,000 or 5,000 copies daily, whereas that’s rarely true and 60–70% of issues are returned.

Print papers with great reservations can be considered a product, since it’s a business that doesn’t generate profit. As purely business projects, the daily papers Haykakan Zhamanak and Chorrord Inqnishkhanutyun can be observed, which are in demand at kiosks and try to operate according to the principle of “none returned”; that is, to print as many copies as will be sold.

A majority of newspapers in Armenia exaggerate their circulation figures, since the sponsor’s subsidy is a condition of their viability. And it’s necessary to show the sponsor (or advertiser) an attractive circulation figure. Of course, it would be ideal if newspapers were self-sustainable (by placing ads and maintaining sales); however, in Armenia, the advertising market isn’t particularly interested in placing an ad in the paper, giving preference instead to the TV industry.

Newspaper sales have gone down and continue to do so all over the world, while newspaper readers have significantly “aged”. Reading the paper is more an issue of habit. It is read mainly by those who have become accustomed to the paper format and the daily habit of browsing through newspapers. The youth, however, are not prone to frequently buying and reading newspapers — their main source of news is completely different. In recent years, traditional newspapers, feeling that it’s necessary to confront a high-tech saturated media environment, actively migrated to an online domain, which, in turn, “supported” the reduction of real circulation figures (why should I buy the paper when the same can be read for free online?).

P.S. And since no state agency has the function of inspecting circulation figures, newspapers can note any circulation figure they like (even up to 3 million copies). As told to us from the RA Ministry of Justice state registry office, a lawsuit concerning a dispute over circulation figures was launched against Gyumri’s Hingshabti newspaper. The paper won the case since the charges were deemed to be unfounded.