Armenia’s TV Stations were Silent While Balloons Exploded in Yerevan 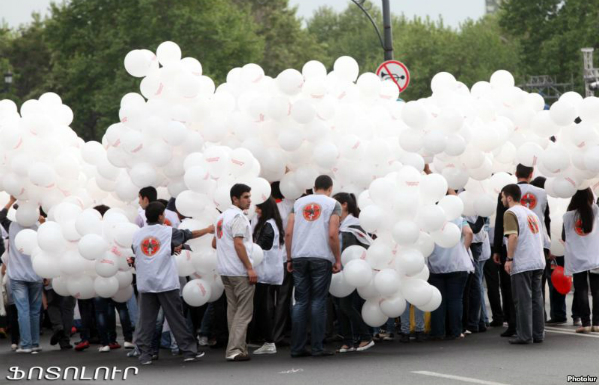 The balloons’ explosion at Yerevan’s Republic Square on May 4, it seems, placed a big and dirty end to the traditional aspects of the month-long election campaign and its coverage.   This dreadful accident proved that Armenia’s television not only is an incurable patient, but also has long been dead. All of Yerevan was in a panic, since more than a hundred people at the Republican Party of Armenia’s concert and pre-election rally were unable to move freely, had received injuries and been burned from the explosion. The streets were closed or clogged, the pseudo-patriarchal songs and speeches were deafening, state bodies were trying to find ways out of the emergency situation as quickly and safely as possible, while the only one who was cold-blooded and heartless was our television (the perfect corpse).

It seems the term “breaking news” doesn’t exist for Armenian television: constant news coverage being one of the primary functions of television — the very first function, in fact, the execution of which justifies the existence of this medium that has the most reach. Well, when is television needed if not in such emergency situations?

Of course, purely from a human viewpoint, it was very difficult to view the images of the explosion and follow the confused people not understanding what was happening on whose heads the flammable gas in the balloons was falling and clinging to their hair, skin and clothes. Even harder to watch was how the glitzy pop songs in the name of the homeland resounded from the stage, when girls and youth brought to the capital from different regions around Armenia were caught on fire literally.

But Armenian television wasn’t silent for reasons of sensitivity or ethics but because of its utter self-censorship. TV stations didn’t know how to cover an incident that didn’t fit into the framework of the usual election campaign (or they hadn’t yet been informed of the permissible limits of coverage), which is why they opted to remain silent on the matter and continue broadcasting election campaign videos and meaningless soap operas. And in this case when Yerevan was truly in turmoil…

H1 (Armenia’s Public TV channel), ArmNews and Armenia TV briefly mentioned the incident in their main news programs (without video footage or in the case of ArmNews, a short segment), putting the main emphasis on the president visiting the hospital and meeting with the victims. Their mission, it seems, ended with that. The most absurd coverage (considering the degree of cynicism), however, was Shant TV’s Horizon news program. First, the host of the program, a person of respectable age and merit, in a simple and haughty voice (as if nothing out of the ordinary had happened), simply said that balloons had caught fire and in the following segment said that despite the unfortunate accident, the concert and pre-election rally continued and people enthusiastically listened to the music and rejoiced.

And on the background of this cynicism reaching absurdity, the only operating TV station was Yerkir Media, which showed images of the scene in greater detail, publicized the names of the victims, where they could be found and the doctors’ views, as well as the versions of what happened, the list of emergency steps taken by the authorities and the hotline number.

Yerkir Media interrupted its regular programming for a special report (H1 and ArmNews did the same afterwards), but in terms of the importance and urgency of the information, Armenia’s Public TV, all the same, was several steps behind the rest. And this in this case when many of the TV company’s employees were at the ill-fated rally and definitely filmed not only the incident, but also what was happening on stage. By the way, watching the televised reports, one was unable to understand whether the concert and the political speeches were interrupted after the fire or not. ArmNews tried to say something to this effect, but we didn’t understand. We also didn’t understand what the president said when he got on stage immediately after the incident.

To understand one had to go online and see how entertainers’ and singers’ voices were being heard at the time when people were writhing and all coiled up on the floor.

Of course, we all understand very well why our television has become a decorative domain, the only function of which is not to reflect life but to decorate it. Television is controlled from one center and until that center decides how to “decorate” the tragic news, the screen will remain silent. And then it will say only that which is pleasing or agreeable to the center.

It’s simply amazing though why this situation doesn’t consume itself. No one’s chained the journalists’ tongues. Even if it’s not possible to present the news in its entirety, news media outlets can be profoundly and demonstratively silent (that is, if they don’t have the courage not to obey) and report only on the fact that the president and prime minister visiting the victims is not only immoral but also ridiculous. And ridiculous in the first place are the prime minister and president, who visit the hospitals but (it seems) don’t even talk to those lying in the beds.

Meanwhile, those watching at home are asking themselves: why are these people in the hospital? How many are they? Why are the injured mainly those too young to vote? And finally, do the victims have names or not?

And at rallies and in hospitals, people are just silent actors who participate in wild performances. And in many cases, not of their own free will.