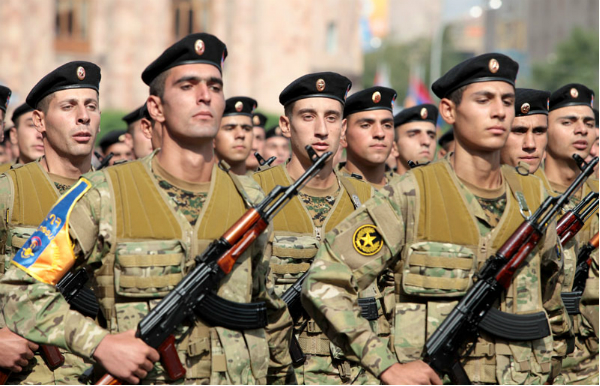 The topic of the army has become the “most loved” for local news outlets and different types of activists. Speaking, writing and conducting interviews on this topic are considered acceptable.

Of course, one of the most important institutions of our country should be at the center of attention. And, of course, it should be as perfect as possible, since the army guarantees our safety and is one of those unique sectors of the state system in which nearly all segments of the population have a direct presence, as nearly every family has at least one member who has been conscripted to serve in the army.

The deplorable incidents in the army are no secret for anyone today — everyone talks about this. But I don’t want to talk about the emotional side of this issue.

Recently I read an interview with Archbishop Mikael Ajapahyan, Primate of the Shirak Diocese of the Armenian Apostolic Church. Let me say first, my impression was that no matter what Archbishop Mikael’s responses would’ve been, the journalist was going to pose all the questions the same way and perhaps in the same order; that is to say, the questions didn’t stem from the answers.

However, what drew my attention the most was the second question: “The atmosphere of impunity, and incidents of death and suicide prevalent in the army recently are at the center of the public’s attention. What would you say about that?”

I don’t know for how many people this part resulted in emotional turmoil, to the tune of “well it’s not impunity, well what is it,” but when reflecting soberly it’s clear that this statement has nothing to do with reality.

My issue now is not defending the army.

But it has to be said that there is a logical contradiction in this sentence. Most likely everyone’s played the game where a player has to get other players to guess a word by saying other words associated with it. If we play this game using the word “army,” the first words of association will be order, discipline, rank, command, fulfilling commands, vigilant, rigor, and so on.

This much on the logical contradiction.

Furthermore, the shortcomings of the army and the atmosphere of impunity, which seems as if it’s no longer (thank god), are not the same thing. I’m sure that raising poignant issues is good, particularly if you pursue solving these issues, restoring justice and so on. But I’m not so sure that through interviews comprised of such questions and generally by being limited to cliches and stereotypes it’s possible to resolve any issues or get answers that suggest solutions (of course, my respects to Archbishop Mikael, who, despite the poor quality of the questions, gave wise answers).

In general, this is more so like a battle cry consisting of cliches than the experience of a professional journalist and a concerned citizen giving resonance to the issue.

And finally, when the journalist is invited to present objective facts to prove her words, will she be able to prove that an “atmosphere of impunity” prevails in the army? After all, aren’t “atmosphere of impunity”, “deaths” and “suicides” words that say practically nothing but are intended to evoke an emotional response? Wouldn’t it perhaps be better to note specific cases and details instead of words used in the plural form and overused phrases? Especially when the interview is with a member of the clergy and responses which might help to solve the issues could be expected from him (from what I understand, this was the aim of the interview).

I think that journalists as much as possible have to avoid phrases that are more akin to irresponsible statements than serious, factual questions and an attempt to seek solutions and address problems.