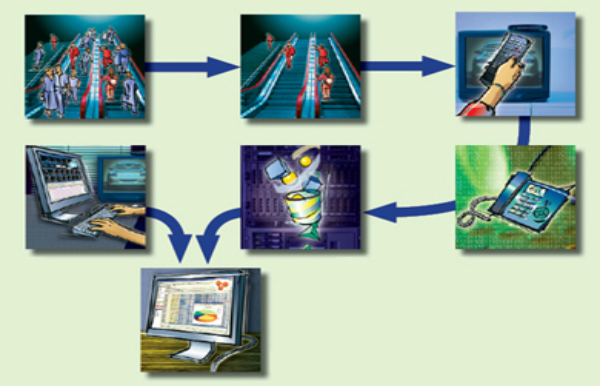 TV ratings are a very interesting area for different research studies — also for such studies that don’t have a direct link with the advertising market or the TV product on display, but are related purely to the human factor. It’s difficult to find a better criteria than TV ratings to understand ourselves and our environment, since all of us one way or another have a connection to television (at the very least, we turn it on as background noise and in some cases, we’re glued to the screen for the entire day).

And unlike various opinion polls, TV measurement studies don’t depend on the client’s whim. Ratings are facts, beautiful and irreversible statistics, which, even independent of our will, paints a picture of us.

In Armenia, TV measurements are conducted through the use of a tool called a people meter (the two companies, Nielsen and Telemediacontrol, use the same tool) and it is assumed that the measurements shouldn’t differ from each other. In any case, the mechanisms of placing the “box” and decoding the data received are the same everywhere and allow researchers to study preferences of different segments of the audience, taking into account people’s sex, age, and education and employment levels.

The graphs of TV viewing measurements can be viewed as a unique public cardiogram which registers not an individual’s heart movements but society’s pulse.

Already working for 6 years in the Armenian market, Nielsen has provided us with information on ratings, which through comparison we can conclude that the overall rating for TV viewing in Armenia has decreased, but, nevertheless, it’s quite high compared to other countries (the graph includes daily viewing in Brazil, China, Iceland, Japan, South Korea, Armenia, Russia, Georgia and the UK from 2008 to 2010).

Of course, a decrease in TV audiences is not purely an Armenian phenomenon — all around the world people have begun to spend less time in front of the TV. However, in Armenia’s case, it’s remarkable to follow not only the drop in number of viewers, but also the transformation of the type of audience. The average person in Armenia watches 4.51 hours of television daily, which perhaps shouldn’t excite but concern those responsible for our TV sector. It should also warrant the interest of state bodies that have more authority, since the characteristic of this mass of viewers is itself very “expressive.” Generally being proud of TV ratings is accepted (“They watch us the most”), but few TV station managers are interested in the quality of the audience (“Who watches us?”). 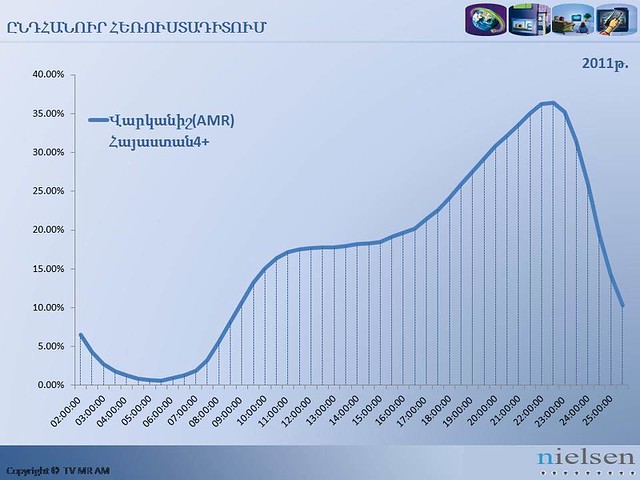 Depicted in this graph is the overall rating of TV viewings in 2011, per broadcasting hour. The TV viewing curve is stable and predictable. 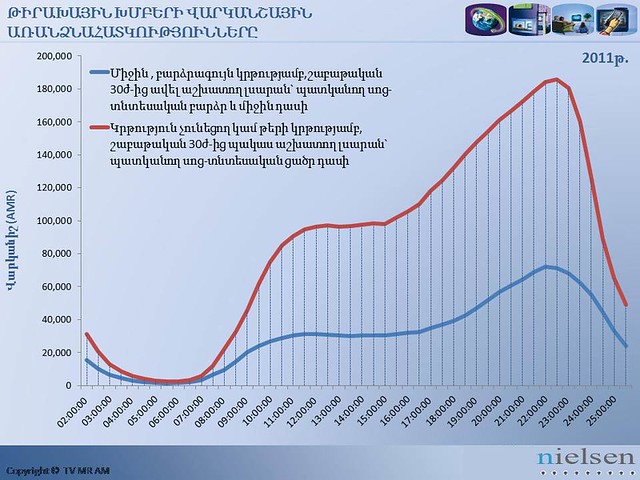 This graph, however, depicts how a homogenous TV audience is split into two parts: an audience of low socioeconomic class (having average, little or no education and working less than 30 hours a week) in the TV viewing race is celebrating a “crushing victory” against an audience of average to high socioeconomic class (having high education and having a full work load). Audience measurement technology allows us to study also the preferences (and problems) of local groups of TV viewers. It’s understandable that spending more time in front of the television are the unemployed, as well as pensioners and children. And it turns out that the main audience is comprised of a segment of Armenian society that doesn’t have stable or sufficient income. And if viewing hours increase, then the number of unemployed (willingly or unwillingly unemployed) people in Armenia also increases. 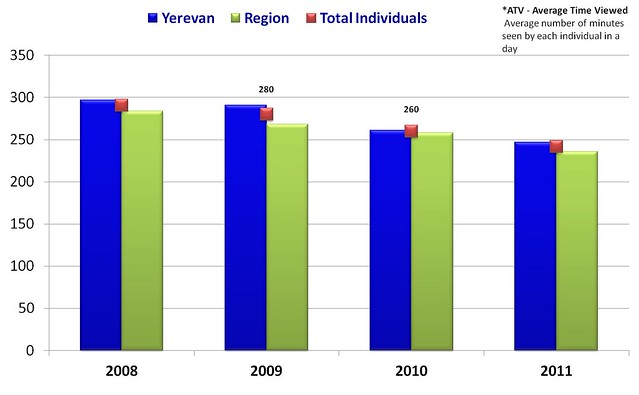 The TV audience converted into graphs and tables is a channel into understanding social problems. Studying this graph would only help the Ministry of Economy and the State Social Insurance Service. Our domestic TV companies, entering the “ratings race” and competing with each other, often ignore that society’s self-awareness is a very expensive factor. A bed-ridden patient (or a couch potato TV viewer) shouldn’t be offered a more comfortable and softer bed but treatment after all, right?