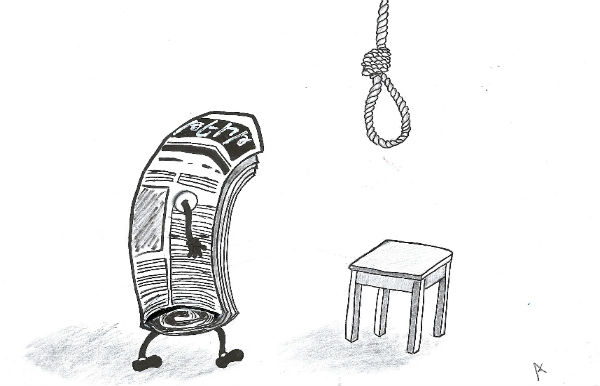 More and more in Armenia there’s talk of the impending death of newspapers. Said and spoken is that very soon Armenian papers will finally and completely cede their place to online news sites. The strangest thing is that such talk is most heard in newspaper editorial offices and among journalists.

Though I myself have never actively been a journalist, in almost my entire conscious life I have actively participated in the establishment of a few of our daily and weekly papers, and naturally, these types of conclusions and forecasts aren’t pleasant to the ear. But if such talk has already begun and is being circulated, it means there are real reasons and grounds for it.

However, such a scare shouldn’t have occurred so soon in Armenia, if even for the reason that a significant portion of the population in Armenia doesn’t have a computer at home and perhaps is forced to buy newspapers: and those who don’t have the means to buy papers, find them from here and there and read them. As for the sharp drop in print circulation, the reason, in my humble opinion, is the population’s insolvency, as well as the scarcity of interesting journalistic pieces.

And the reason for the scarcity of interesting journalistic pieces, I believe, is the shortage of creative inquisitiveness of journalists, or rather, the absence of it.

No matter how much we complain of the poor quality of Armenian television programming, the fact remains that in the media industry, our newspapers fall quite behind our television companies; meanwhile, news sites, in terms of urgency of publishing, are fully in a position to have a leg up over television.

In this situation, what are newspaper reporters to do? They have to give preference to analytical pieces: that is, they have to fulfill the advantage newspapers have over television and news sites. That is to say, they have to approach their work more creatively — just like the journalists of the first generation of Republic of Armenia’s independence. Armenia was newly independent, newspapers were freed from censorship, and journalists had devouringly surrendered to free speech.

To tell the truth, I was thinking to recall them by name, but when I began to write down each of their names, half way through I understood that they number more than a hundred. And I stopped half way because I had no right to forget anyone, and if I listed them all one by one, this piece would be longer than necessary. Already without it, it became lengthy! In short, those more than 100 young journalists, who were 20 to 30 years old during the first few years of Armenia’s independence, laid the foundation of our free and independent press. Today, they’re approaching 40 and 50, but again they bear the weight of nearly the entire field of journalism on their shoulders.

It’s true, new youth have appeared in the area of print journalism, but they haven’t yet made their significant contribution because perhaps they are working and creating under the auspices of the elders. If the youth of the new generation don’t launch their own papers, print journalism in Armenia will truly disappear. But it will be only a temporary death because life has already shown us that it’s possible to begin from zero — just as the youth of the 90s began from practically zero, and considering that they number more than a hundred, I’m finding it difficult to remember at least 10 exemplary names in Armenian journalism in the Soviet years of the 70s.

That is to say, everything is before us.