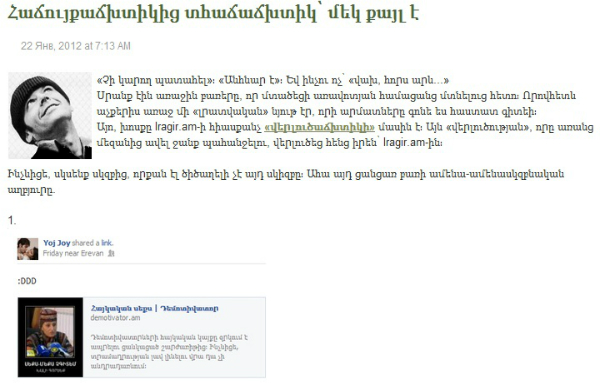 It turns out that for Armenian news outlets, social media networks and all the types of activities within them serve not just as a source of information, since when necessary, a news outlet is willing to rely on, for example, a Facebook joke, and direct its heartfelt remarkss to specific addressees. I’m referring especially to a joke that surfaced in these past few days and has already become the basis for a critical piece in the press, the author of which eventually personally apologized for news outlets that didn’t get the joke.

This is one of those incidents when it’s simply necessary to name names — to correctly understand the content, even if the journalist who has forgotten his sense of humor and professional ethics will lose his reputation. Just 3 days ago, active Armenian Facebook user Edgar Barseghyan (or alkhimik as he’s known in the blogosphere) posted on his personal page a joke that assumed, “[Armenia’s] Language Inspectorate finally translated the word sex as [penetrative pleasure, roughly translated].”

The topic, of course, was good grounds for infectious fun, but who would’ve thought that the joke would be reflected in a top headline in a widely read Armenian news website just one day later? Over the weekend, one of the four main topics on the Lragir.am website was a piece (in Armenian only) accompanied by a photo of a couple in a passionate embrace on the beach, titled “The State Inspectorate and Sex”. Though author of the piece Yeghishe Metsarents considered it necessary to point out the Armenian translation of the word sex was being discussed in Facebook and that “it seems there isn’t yet an official explanation, retraction or confirmation from the National Language Inspectorate,” he didn’t hesitate to make use of the opportunity and take a swipe at (as justifiably noted by author of the joke Edgar Barseghyan) not only the inspectorate’s activities, but also bring up head of the inspectorate Sergo Yeritsyan’s past and the promises he made (or perhaps didn’t make). The reporter, who took the joke seriously, was already imagining that “the National Language Inspectorate is seriously engaged in the important, strategic work of developing an Armenian dictionary of sex [and sexual terms]” and he has to, according to the journalist, translate, “say, erotica, pornography and other such concepts.”

In just two days over the weekend, around 100 readers “liked” this piece on Facebook, not to mention the fact that the news site, which is financed by different international agencies, has a steadfast army of readers — according to the Armenian web resources rating site Circle.am, Lragir.am has 100,000 visits per week.

As for the author of the joke, he considered his debt paid by apologizing (instead of the journalist) on his own blog to the “National Language Inspectorate and Sergo Ericyan personally,” noting, however, that the apology is not for the joke, since in this, “the Inspectorate performed the role of Armenian radio”.

There are many stories like this that spread quickly and easily reach the masses online that are called memes — but it’s very hard to find such unfounded memes and that have gotten so serious. Especially interesting in this case was the connection, which actually has no intersecting edge even in the piece, between the news outlet and the social network or the free and unconstrained thinking individual and the journalist. It wouldn’t be surprising if at the start of the week, according to the already accepted custom, the subject circulated among at least other online news providers (which multiply no less quickly) and even reached the more traditional forms of media, such as radio and television, which have made it a habit to pay attention to social networks.

Admit it, the Armenian translation of the word sex and generally any “news” related to sex is, indeed, a good opportunity online to gather “clicks” and be read, but after all, doesn’t the reader have the basic right to receive reliable information? Of course, the Language Inspectorate’s traditionally held position and the very interesting translations of several words could become a seriously critical journalistic piece, but only if that criticism has a really sound basis and direction. On the basis of a misunderstood joke and a string of unfounded assumptions, this incident is a violation of journalism ethics — where the journalist not only “misbehaved” in not checking the facts, but also was too lazy to provide the corresponding link, which would allow some readers who haven’t lost their sense of humor at least to have an occasion to smile.

It remains only to prompt news outlets that, yes, in these days of new media social networks have a prevailing role in being a reliable source of information, but don’t forget that social networks are also personal domains where anyone can express himself freely, share opinions and even make a joke.