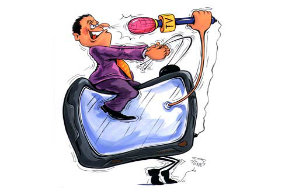 Armenian TV stations often run such reports in which the information flashed, the images arranged and the lexicon used at once show that this isn’t a piece of journalism aimed at the public’s attention but a promotional video.

A new genre of TV news has been created, which supposedly is tied to social (cultural, sport or political) issues, but in reality carries out the televised praise of certain individuals.

A politician, businessman or state minister who wants to create a good reputation for himself visits a hospital (or an art exhibit, military base, stadium or store) accompanied by TV reporters, who then prepare a story and call it the day’s news.

This format cannot have the weight of news if only for the reason that the public is informed of not an event, but the actions of a single individual participating in that event. And not to mention that the individual is not even a participant of this event (he is neither a doctor nor an athlete nor an artist), but rather a certain official or businessman attending or attached this event, who has decided to inform viewers of his visits and meetings and pays the station to carry out his personal PR.

Such “advertorials” appear on all the stations without exception, sometimes even comprising the lion’s share of the news program’s air time.

These promotional pieces aired during the stations’ main news slots are shot by the station’s reporters — which perhaps is intended to prompt viewers that the creation of such a promotional report was due to the reporter’s own sincere drive, and not by the money paid or will of the individual prominently featured in the story.

The desire to mislead viewers is clearly evident particularly on the H1, H2 and Kentron channels, while Shant TV, for example, attempts to separate promotional news through its paid broadcasting “Special Supplement” program. Shant’s approach, of course, creates a distinct divide between what’s news and what’s advertising (but, all the same, it doesn’t mention that it’s advertising), while the rest of the stations drown the airwaves with advertising-reports, offering them under the guise of unbiased news.

Actually, this tendency has two explanations: first, in the name of public interest the stations can offer viewers the commercial interests of small groups (by the way, the same approach works in the areas of economy, culture and the environment).

And second, the stations make money. Being financially secure, of course, is an honest desire, but this tendency, which is noticed in the choice and provision of information, is already evidence of a serious process of mutation.

Television is being altered, its screen turned into a huge advertising platform, every square centimeter of which has its price. And imposed on information is not only a hidden sort that’s pleasing to the authorities, but also a type of open advertising.

As a rule, the structure of and emphasis in such video reports reproduce agitprop posters of the Soviet era, their language of which was strongly imperative and pathetic, and leaders were in the center of the shots.

Who can say what they’re about — for example, those “reports” aired with surprising persistence where, say, (Prosperous Armenia party leader and major businessman) Gagik Tsarukyan and (Vivacell-MTS General Manager) Ralph Yirikian participate in some event (congratulating, cutting a ribbon, encouraging, sponsoring or donating)?

The so-called “television content” appearing in news programs is advertising, pure and simple, and should be presented, perceived, and calculated as such — and if it exceeds the duration permissible by law, it should be prevented. Otherwise, it’s incomprehensible why the following amendment was made to the RA Law on Advertising in May last year: “… broadcasting any type of information about a TV or radio program’s sponsors preceding and/or following said TV or radio program’s ad is considered advertising broadcast through electronic media.”

As is known, the amount of advertising (including covert advertising) cannot exceed 14 minutes per broadcasting hour.

P.S. The following report recently aired on local television features a meeting between National Olympic Committee of Armenia President Gagik Tsarukyan and the heads of 18 sport departments. Is this piece about sports? Of course not. It’s about “futile wishes to introduce a split and barbarism in the harmonious and prosperous family.” And this is pure agitprop. That is, an advertisement which is not about an issue, but about the portrait of the person “resolving” this issue.