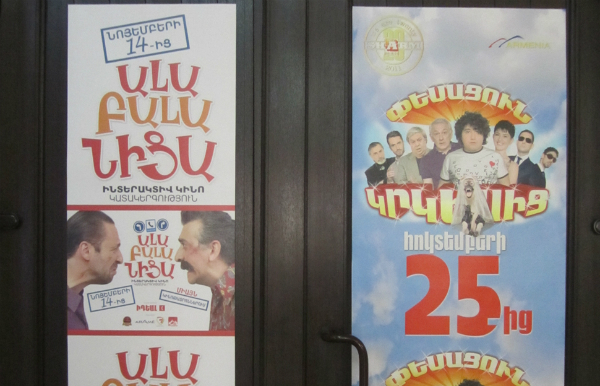 Recently screened in Yerevan theaters were three domestic productions, which, as business projects, had many similarities. The important common denominator is that the decision to produce films was made by TV companies — participating in financing, filming and advertising the films to varying extents.

Generally there are two things required to produce a film: a crew and a funder. Now these two functions have merged. And since the body funding the film is also producing it, it will be filmed quickly (since time is money) and what will be filmed is that which will bring in money (through advertising and being advertised).

The films AlaBalaNica (also spelled AlaBalaNitsa), Fiance from the Circus, and Open the Door were produced to obtain light and unobliging laughter and to make money. And now, when for nearly two months the films have been screened in Moscow Cinema to nearly packed audiences, reaching even the maximum number of screenings, it can be said that the films reached their purpose. That is, they brought in money for the producers.

AlaBalaNica was produced by the leader of comedy shows, Armenia TV, which, along with Sharm Holding, also invested in the film Fiance from the Circus, while Kime TV company, shaped in the bosom of H1 (Armenia’s Public TV), made a great contribution in the production of the film Open the Door.

Not intending to examine the aesthetic quality, structure and inner logic of the films, we want to note that the onrush of aggressive advertising of domestic comedy films as a phenomenon doesn’t deal so much with cinema as it does with TV business.

Film producers lean on the trademark personalities of their private channels (many of whom aren’t actors or are semi-actor TV hosts), circulating their faces and increasing the rating of their comedy/soap opera/sketch shows.

Transported from TV screen to the big screen is the army of naive and vulgar, vagrant and oligarchic personalities, the birth of which was trumpeted in the television industry. This army will again return to the TV screen and with greater vigor will host programs such as Kargin Haghordumner (“respectable programs”) or Good Morning, Armenians or Good Night, Armenians. Let’s not also forget The Mechanics of Happiness.

It turns out that cinema is made to serve television. And this is happening in a very direct way, since

(b) aggressive and smartly coordinated television advertising is the most practical method of purchasing the given product (in this case, film tickets)

(c) the creators of the films know very well that they are producing a short-term product for use because situational humor comedies are forgotten when the situation is changed. A good example of situational humor is, say, the fast-paced speeches of guests on the Russian game show KVN (KBH in Russian), which can be meaningful and engaging but not for a long time.

At one time, a basic mathematical calculation was made to determine how big of a potential audience a cinema might actually have. In a million-strong city like Yerevan (the more accurate figure determined after acquiring the results of the latest census), the number of those wanting to watch widescreen films is about 100–150 thousand people. This average figure emerged also from the fact that the number of those wanting to watch films on discs and online is increasing day by day.

Managers of the Yerevan-based Moscow Cinema assert that the total views for one film hit an absolute record. That film is AlaBalaNica. The film started with one screening then moved to six screenings per day. In the course of one month, a minimum of 70,000–80,000 theatergoers watched this film. If this number is multiplied with the ticket price, then so it is that the film is truly a lucrative business project — especially since the torrent of advertising for the film the producers did for free (after all, it’s their own station, right?).

In addition, AlaBalaNica applied a new trick to make money. It persuades viewers to watch the film a few times, because, according to the creators’ idea, the interactive film branches into different plots, and viewers need to see them all. There are three versions, and they advise you watch all three. And people do.

Films created by television entities are not unique cases, but a tendency needing to be studied. Especially if we consider that TV channels without taking a long break are already preparing to fill Armenian theaters that are strapped for cash films with new cinema productions.

After all, only an uneducated manager would stop the flow that brings in profit (wanting to earn money, after all, is an honest incentive). And films in this format are truly lucrative; more so when you compare them to state film productions that have long been living in agony.

Generally Armenian film production can be considered a mystical sector since no one is actually able to clearly articulate why some projects get state backing and why whether this support is considered effective or not isn’t spoken about later (even if only from the perspective of number of viewers). I mainly referring to the mission to create imperishable national values, and it is because of this inundated formula that films often fail. This is because the majority of films backed by the National Cinema Center of Armenia are not addressed to anyone, while these new films having a television foundation are addressed to a specific audience: to the TV viewer, who doesn’t get lazy and tearing himself away from the television screen, goes to the cinema.

If only for the reason that the TV stations are reviving the tradition of going to the cinema, we can be grateful to them. But the fact that going to the cinema began from the manipulation of pseudo-comedic TV specimens, can be considered, in the best case scenario, a temporary problem that can be overcome. Otherwise the newborn cinema tradition will die quickly. And no advertisement will be able to save it.

If a less artistic quality appears in the subsequent films, the newly emerging Armenian viewer will turn away from Armenian films.

Cinema is a risky production, the downfall or victory of which is due to not only the basic chain of supply and demand, but also forecasting ability. That which is topical today can become useless tomorrow.