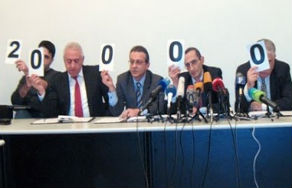 “They permitted us to have just one TV company,” assures the owner of two former TV channels.

On Jan. 26, 2011, the following Q&A with Grand Holding President Hrant Vardanyan was published in the local Armenian daily Hraparak.

-Some time ago, there was talk that your TV company Ar would be shut down. Did you reach some sort of an agreement, were certain issues resolved that the TV company didn’t get shut down?

-No, there wasn’t such talk specifically about Ar. There was just a decision that two TV channels were considered too many, or I don’t know what they considered. They allowed us to have just one TV company, in which we squeezed programs from the two TV channels.

-That is to say, that Hayrenik [“Fatherland”] will not longer be on air?
– Both will be [on air]. Hayrenik will be on during the daytime and in the evening, it’ll be Ar.

Just a few sentences, in which there’s proof of at least a few violations of the Law on Television and Radio.
First, the anti-trust laws clearly define guarantees so that a legal personality or natural person, or even affiliated persons, can have a license for no more than one TV company broadcasting programs.

Second, Ar won the competition clearly defined by law for children, science, education and cognitive-orientation. That they continue to show Bollywood films through that TV station, or try to, as Mr. Vardanyan says, squeeze Hayrenik into the daytime hours and Ar in the evening slots, in no way corresponds to the conditions of the license which this company received.

However, what’s most important in this short paragraph is the following sentence: “THEY PERMITTED US TO HAVE JUST ONE TV COMPANY.” And this frank confession by Hrant Vardanyan is simply that which was asking to be proven, which the experts in the field suspected long ago: that is, it leaves an impression of a prior arrangement, of how TV companies participated in this competition.

Of course, when we were asking NCTR (National Commission on TV and Radio) President Grigor Amalyan how he explains that this entire competition process became mainly an imitation, with its singular, already-won participants (16 of the 18 competitions announced had only one company in the running), he said: “It’s clear that television activities, purely in a broadcasting sense, are not attractive, since our volume of advertising, which has to become a vital environment for ensuring the lifeline of TV companies’ work, is small.”

However, it’s obvious that the TV sector is an attractive sector insomuch as the future competition participants had previously arranged and divided among themselves who will submit an application to receive which license, who won’t submit an application at all (with the exception of A1+ and GALA TV. They had promised certain things to ALM obviously, then tricked them). This is very similar to that vicious tradition of elections which was recently established in Armenia; that is, with one candidate, the outcome of the elections is known in advance.

Regarding these single-candidate competitions, which are difficult to call an actual competition, a suspicion arises from the decisions made by NCTR, whether the members of this commission read the competitive bid proposal submitted by TV stations. Since not even listed in the decisions is how the submitted proposals met the criteria defined by law to determine the winner. It simply says, “Through reviewing the bid and accompanying documents submitted by the company, it became clear that they satisfy the requirements defined by the RA legislation.” And at the end, for the next 10 years, TV viewers cannot make demands in particular so these companies fulfill their commitments.

Though even during prior competitions, at the very least the authorized body, the NCTR, never made any demands of TV companies, of their obligations, nor fined them for committing violations: fines, penalties, the problem of a jealous attitude, NCTR reserved these exclusively for those TV companies that, more or less, acted independently.

Anyway, there won’t be competitions (for broadcast licenses) in Armenia for the next 10 years. And if everything’s going to continue in this way, the competitive process is completely void of meaning; a meaningless waste of nerves and efforts. It’s all the same, those who are permitted in advance will get the chance to engage in activities.