What News Circulated And Was Refuted Between June 15-30 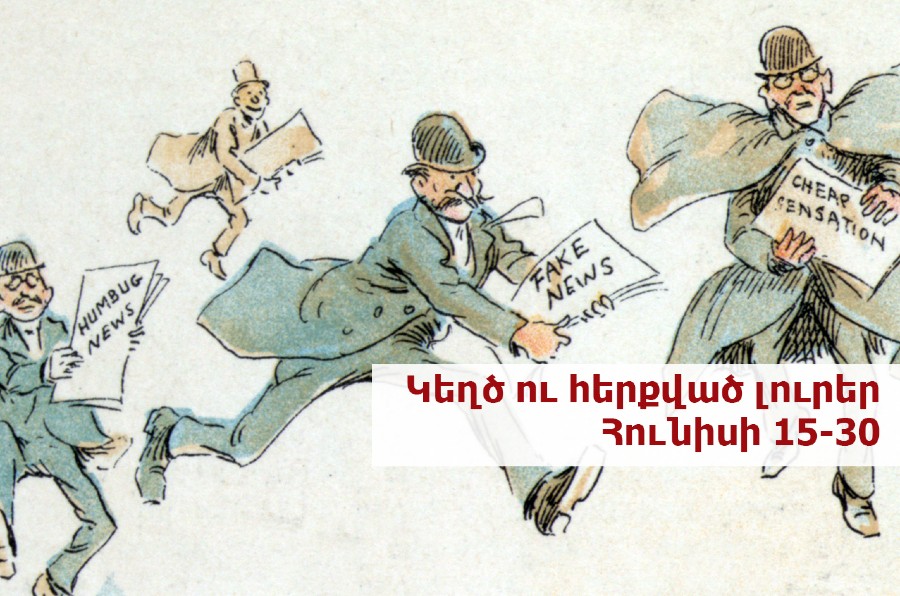 In the second half of June, the media published and republished fake news on various topics ranging from the Pan-Armenian games to the mourning ceremonies in the church.

False allegations about the Minister of Justice’s business

The newspaper also added that “the Ministry of Justice has always cooperated with Concern Dialogue and had given the ‘most dirty cases’ to the Kocharyan legal company.”

None of the allegations were accompanied by documented of proof or source of information.

The Ministry of Justice denied it. Badasyan’s stake in the Concern Dialogue Company was sold in May 2018. Also, the claim that the “dirty cases” were “passed on” were also denied. The company is not directly cooperating with the ministry but is a local sub-consultant selected by an international company which protects Armenia’s interests in one of the court cases.

The Zorats Karer are not an observatory

On June 20, Livenews.am wrote that during the excavations carried out in the territory of the Zorats Karer historical reserve, “encroachment” was made against the site, and it was not presented as an observatory. The author of the article quoted Carahunge as an observatory as per a decree of the government, which, however, was no longer in effect in 2017.

The hypothesis that the Zorats Karer are an astronomical observatory has been denied a few years ago. Media.am has studied how it had been promoted and why it had not been confirmed that the monument is, in fact, an observatory.

Livenews.am also wrote that laws were violated during the excavations, but there were no details as to which legal provisions were violated.

No technogenic disaster is to be expected

On June 22, Zhamanak daily warned that Yerevan is to face a “technogenic catastrophe.” The newspaper insisted, “According to professional estimates, the subway train can fall out of any part of the city asphalt,” The reason, according to the author, is the non-renovated rails.

The newspaper did not clarify the details regarding “professional assessments.”

On the same day, the Yerevan Metropolitan issued a statement urging the public not to panic, The rails are checked and repaired for even the smallest of problems. The Metropolitan also noted that the cabins travel at a depth of 70 meters and would not be able to get out onto the asphalt.

Three pieces of fake news on the Pan-Armenian Games

Zhamanak daily published three pieces of fake news regarding the 7th Pan-Armenian Games starting on August 6, which will be taking place in Artsakh. The newspaper wrote that Georgia and Turkey banned their citizens from going to Artsakh, but the article did not bring any supporting evidence or source. Two weeks later, the newspaper issued a new report saying that Iran also refused to send its delegation to Artsakh in order not to spoil relations with Azerbaijan.

This news was denied by the Pan-Armenian Games Press Service, noting that the Iranian delegation is among the largest.

Robert Kocharyan’s name was also used in one of the publications of the newspaper, the Olympic Committee of the Pan-Armenian Games called on the three Presidents to participate in the opening ceremony of the Games in Stepanakert. The paper concludes that everything is being done in order to bring Kocharyan to the event.

This time, there was no information proving the claim. The news was again denied, with a clarification stating that no such call was made.

Several news outlets reported that “murderer Nairi Hunanyan will be released in October of this year.” The only source of this news was a Facebook post made by Narek Malyan, who had misinterpreted the changes made in the Criminal Code.

Malyan wrote that “imprisoned killers can move on to an open regime, that is, be released from prison.” His thoughts were reprinted in the media in the same way, despite the fact that he was giving false information. The transition to an open regime does not mean release. The new law stipulates that at least 20 years after serving their sentence, the convict may be transferred to an open correctional institution, which implies more freedom of movement within the territory of the correctional facility.

Media.am has touched upon this topic in detail.

Several media outlets reprinted the same fake news that the governor of Kotyak had filed a criminal case against the mayor of Abovian because of the “I Love Abovyan” sign. The publications spoke about a violation of the Law on Language and called the sign “terrible.”

Governor of the region Romanos Petrosyan demanded the media reports deny the news: no such criminal case against the mayor of Abovyan was initiated.

Unfounded allegations about the Zvartnots-Tbilisi bus

On June 26, a number of news reports claimed that a free bus ride from Zvartnots airport to Tbilisi would be used by Georgian authorities.

All of the news items were based on Zhamanak’s publication “Free Bus Route, Zvartnots to Tbilisi,” which did not mention any source of information.

Not a single official report or additional information was released within a week after the publication.

Mourning ceremonies will not be forbidden

On July 18, the media reported that the Catholicos agreed to stop the mourning ceremonies in the church as a result of a meeting with the NA Vice Speaker Vahe Enfiajyan.

The news appeared on various websites with the same title, “Vahe Enfiajyan suggested that Karekin II stop the mourning ceremonies in churches. The Catholicos agrees.”

The news from the Mother See refutes the news: mourning ceremonies are not prohibited, they are an important part of rituals.

During his meeting with the Catholicos, Enfiajyan informed him of the problems raised by residents surrounding the churches. According to Enfiajyan, the Catholicos “was aware of these issues and had the desire to give them solutions.” However, there are no prohibitions or other decisions. Enfiajyan also pointed out that the media was trying to take things out of context and “chose a very sharp title.”