The Capture Of Zangezur Is Not A Narrative Of The Opposition 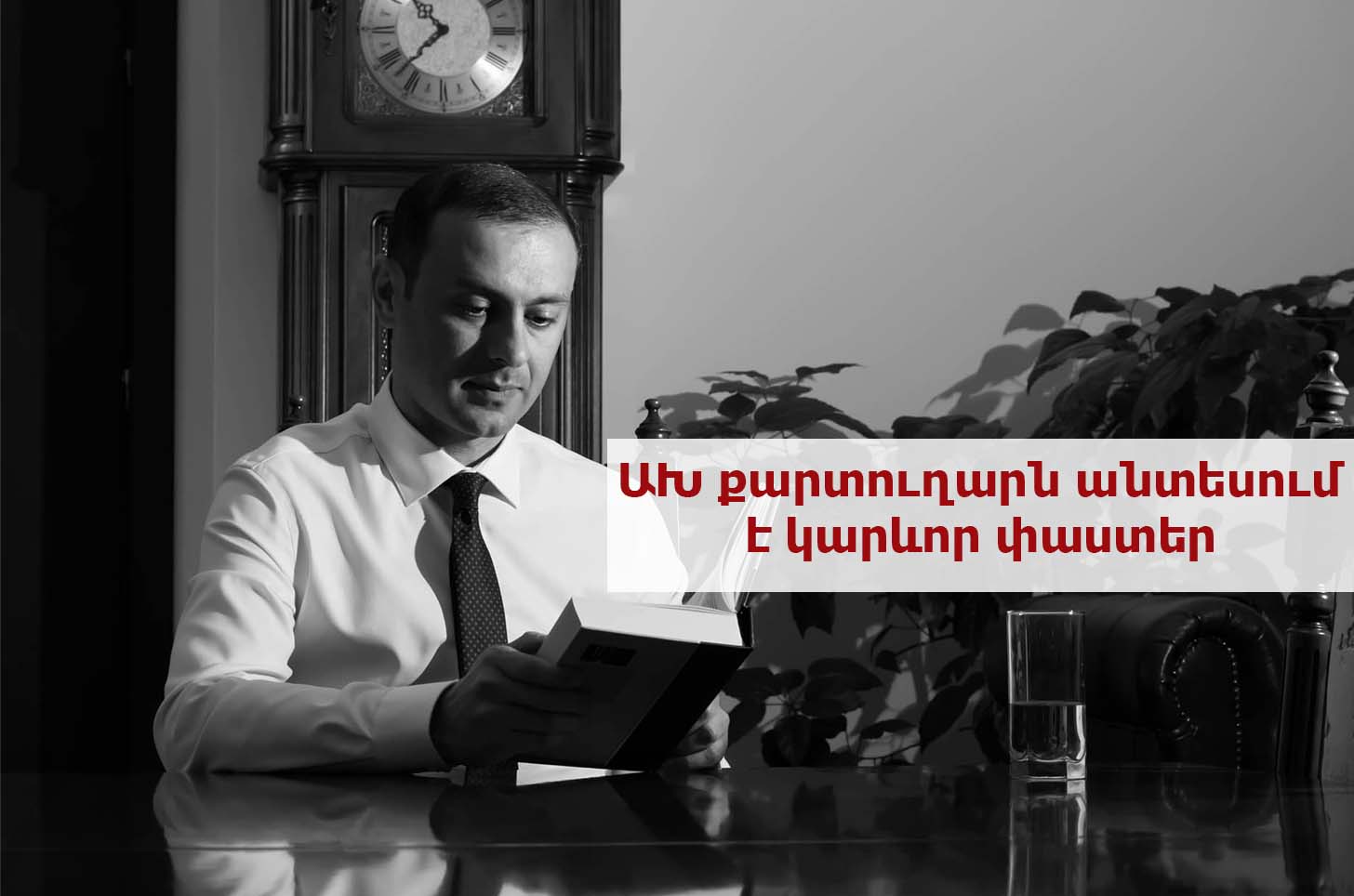 On March 27, the Secretary of the Security Council Armen Grigoryan, on the air of the Public Television, answering the question of the host Petros Ghazaryan, stated that the narrative of the Turkish attack on Zangezur is spread by the opposition in Armenia. According to Grigoryan, only two newspapers wrote about it, one in Greece, the other in Iran.

“Let’s note that in both Greece and Iran, one periodical spoke about it, and when they came to the Armenian press, it was presented that the press of that whole country was talking about it, while the reality is that one periodical in Greece and one periodical in Iran spoke of it. The other problem is that these periodicals are connected with the street opposition forces, more specifically with the Demirchyan Street opposition forces. The opposition, realizing that the narrative of the war in Armenia cannot be advanced with greater intensity, has begun to use the international press,” Grigoryan said.

The newly created civic.am platform also touched upon this topic in its article “Why are the two Iranian and Greek sources waging war against Syunik?” Where the author made the same statements as Armen Grigoryan, in particular emphasizing that these two Greek and Iranian sources are also connected with the Armenian opposition, without bringing any fact proving what has been said. The article was published by araratnews.am and armtimes.com.

The interview mentions the names of the Greek City Times and the Iranian Azariha, who really wrote about the possibility of an attack on Syunik and noted that military equipment is accumulating on the border with Armenia.

The claim that the penetration of the news in the Armenian press is connected with the publications of these two news outlets is not true. The same Greek City Times states in its article that the source of the news is InfoBrics.

According to the website, InfoBrics is the information platform of the informal group BRICS, created on the initiative of Russia, of which Brazil, Russia, India, China and the Republic of South Africa are members.

Thus, the Greek Greek City Times, which, according to Armen Grigoryan and some media outlets, is connected with the Armenian opposition and promotes the narrative of the resuming war, was in fact not the author of the information, but one of the disseminators.

In the case of real news, Azariha was the only one who managed to find this news. The news did not really spread in other media, although the Armenian press reported on March 24 that the Iranian media reported the accumulation of equipment and Turkey’s intention to occupy Syunik.

The new war is not the narrative of the opposition

It is interesting that the Secretary of the Security Council connects the spread of the news with the Armenian opposition and the opposition press, but it also appeared on the website of the Public Radio. 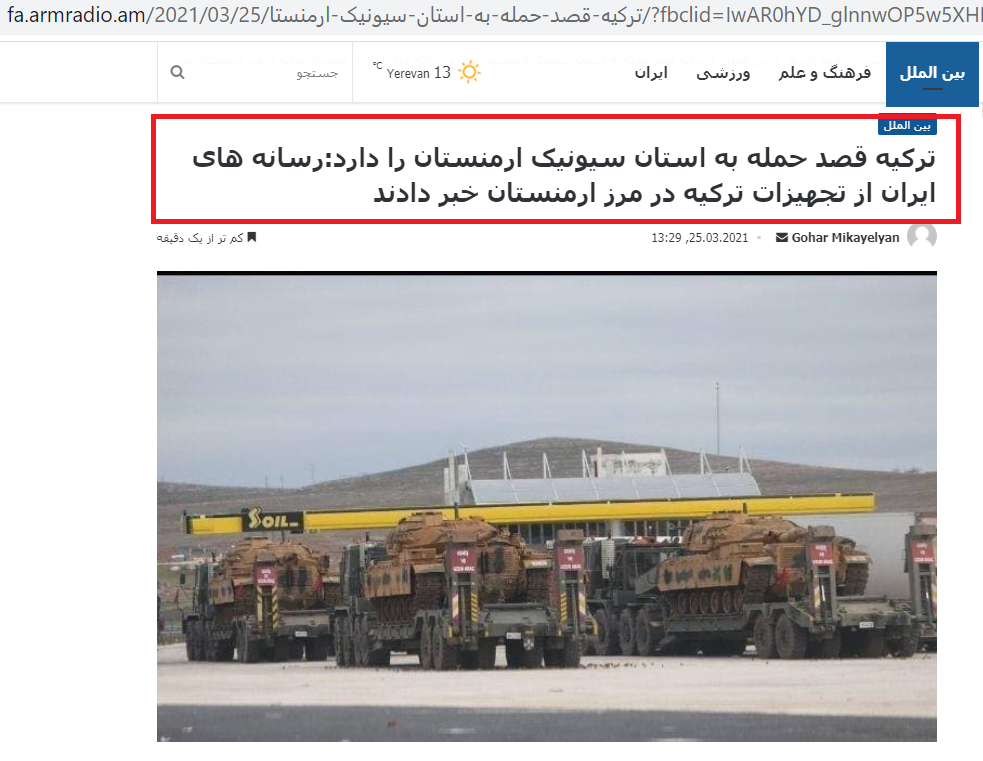 The literal translation of the title is “Turkey intends to attack Armenia’s Syunik province.” Public Radio also broadcast information about the occupation of Syunik by Turkey and Azerbaijan and a possible new war in December 2020, quoting the Scientific Director of the Institute of Oriental Studies, Academician Ruben Safrastyan. The latter, by the way, has repeatedly said in interviews that there is a secret order by which Armenia must be eliminated between Azerbaijan and Turkey.

Armen Grigoryan speaks about the narrative circulating with the support of the opposition, but on behalf of the government, he also spoke about the danger of Azerbaijan occupying Syunik. Let us recall that the March 12 statement of the Yerkrapah Volunteer Union headed by Sasun Mikaelyan, a member of parliament from the ruling “My Step” party, in which the board expressed concern over the situation in the country, because “the leader of the enemy country is already slandering and threatening to conquer Zangezur.”

The possible new war against Armenia with the involvement of Turkey and Azerbaijan is not limited to internal discussions in Armenia. The threat of the occupation of Syunik comes first of all from the statements of high-ranking officials and analysts of Turkey and Azerbaijan. Let’s remember the map presented by Turkish broadcaster Ekrem Achkel in the news of Turkish TGRT TV in December 2020, in which the Syunik region is represented as a part of Azerbaijan. 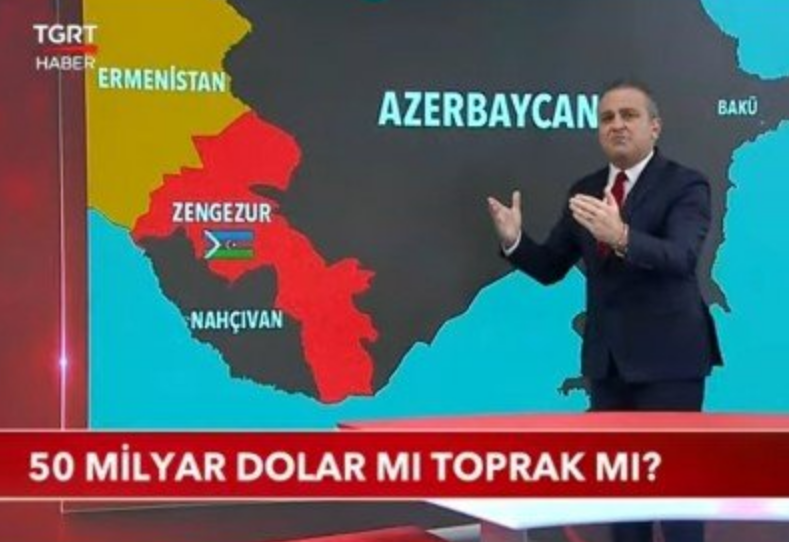 Aliyev’s “invaluable” contribution to the dissemination of the narrative

Azerbaijani President Ilham Aliyev did not play a small role in spreading this news.

Let us remember his statement in 2018 that Yerevan is the historical territory of the Azerbaijanis, therefore its return should become a political goal. Or the 7th conference of the Cooperation Council of Turkic Speaking States held in Baku in 2019, during which the President of Azerbaijan Ilham Aliyev announced that “the transfer of Zangezur to Armenia” led to the geographical division of the Turkic world.

After the war, this belligerent rhetoric continued. During the “Victory” military parade in Azerbaijan in December 2020, Ilham Aliyev did not shy away from circulating the old narrative and declared, “Zangezur, Goychan (Lake Sevan) and Yerevan are our historical lands.”

The most recent example is the Conference of Economic Cooperation Organizations when Aliyev invited his colleagues to use the “Zangezur Corridor,” and once again called Zangezur a “historic Azerbaijani” territory.

Yesterday, March 31, at the summit of Turkic-speaking countries, Aliyev once again spoke about the “Nakhichevan corridor” and again called Syunik, which is part of Armenia, an Azerbaijani territory. “…Zangezur, which is an old Azerbaijani land, will now play the role of uniting the Turkic world. That the transport, communication, infrastructure projects passing through Zangezur will unite the whole Turkic world.”

From the examples given, it is obvious that the political narrative attributed to the opposition about starting a new war involving Turkey and Azerbaijan and capturing Zangezur has been spread by both the government and the pro-government press. These conversations appeared on the agenda not only through the mediation of Iranian and Greek media but also by various other media. And most importantly, the leader of Azerbaijan Ilham Aliyev does not allow to forget about the threat of the capture of Zangezur with his numerous statements.