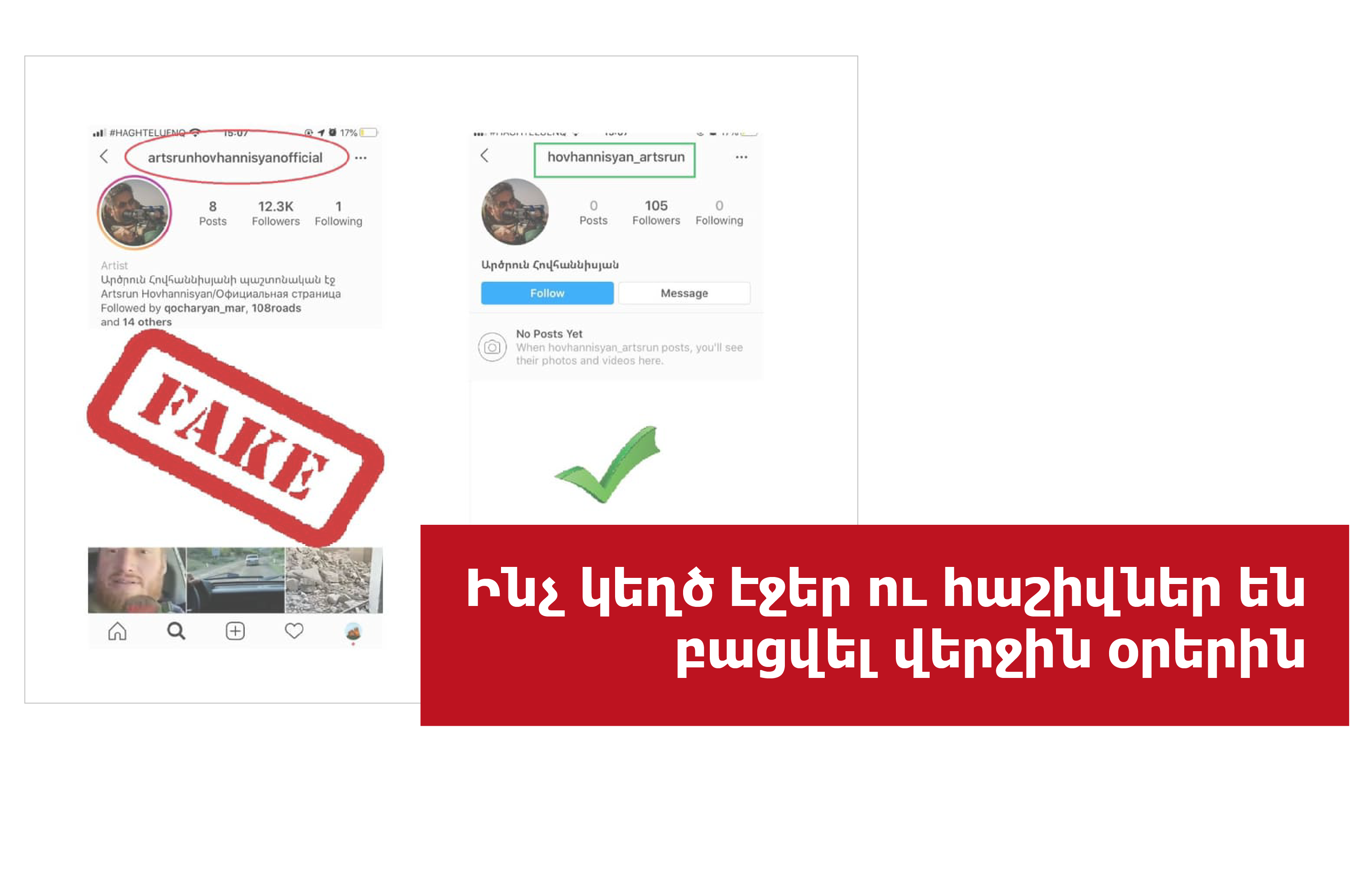 On October 10, Public Television reported that a fake Facebook page with the logo of their news service had been opened.

The real (✅) and fake (❌) accounts are quite easy to distinguish in this case. The famous logo of “Lurer” is used as the main image, but let’s pay attention to the information on the page ․

✅ The real page was created earlier, in September 2018.

✅ In the “About” section there is contact information, links to the site, and other social network accounts

❌ There is no contact information, but there is a bait description: “Follow the “Lurer” news media page for useful and reliable information.” 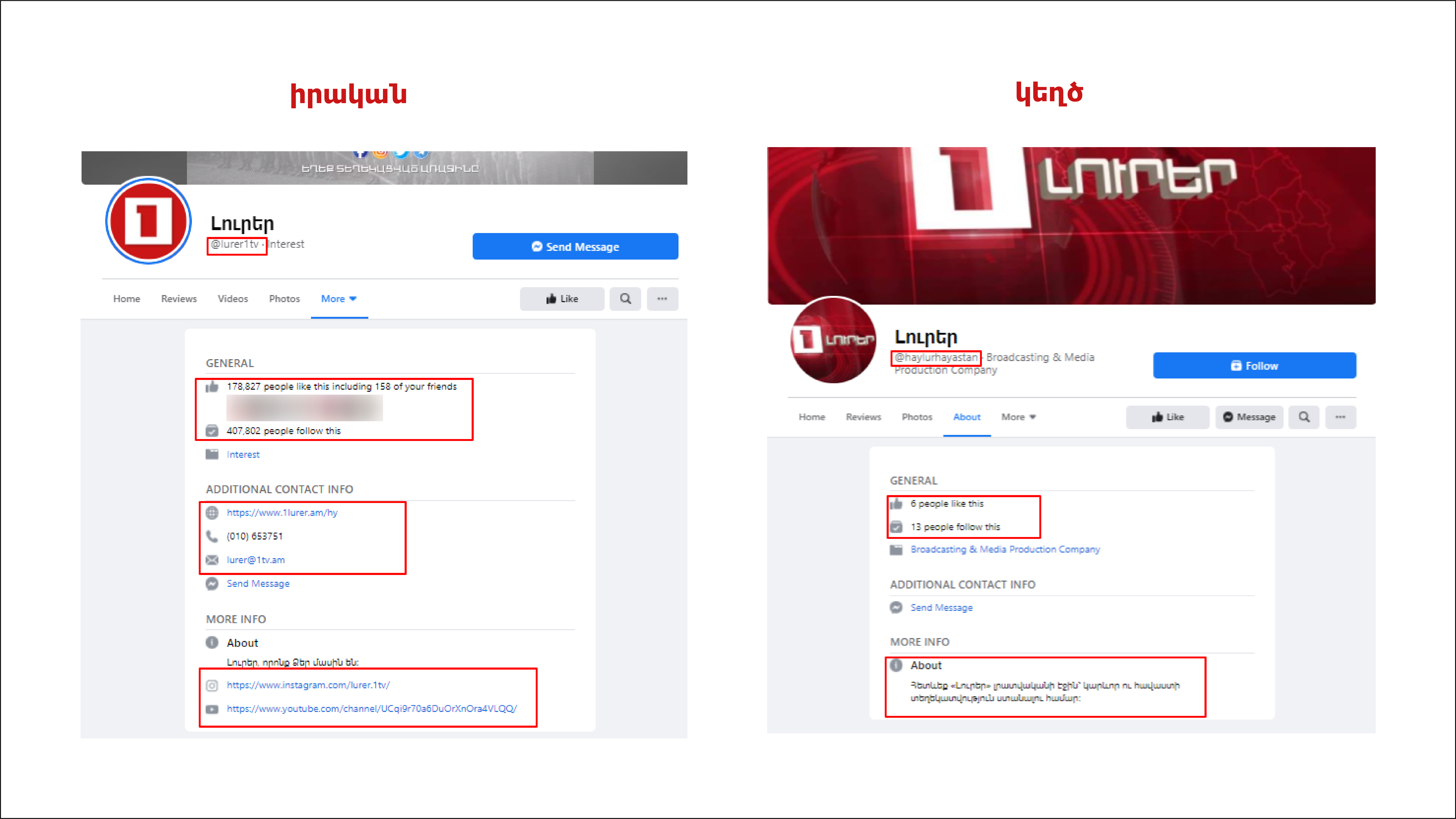 The representative of the Ministry of Defense of Armenia Artsrun Hovhannisyan informed on October 10 that there is a fake account in his name on Instagram and gave the link to his real account. 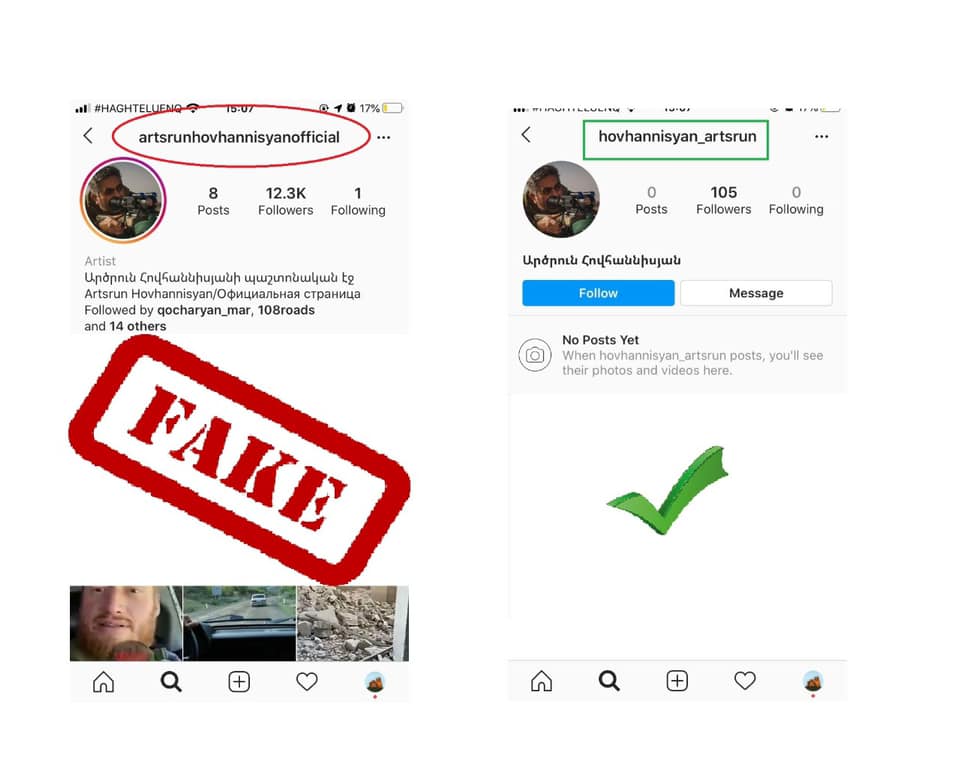 The page that appears in the picture can no longer be found on Instagram. Instead, there are pages called “ArtsrunHovhannisyanOfficial,” spelled in 3 different ways, which don’t have a very large audience. 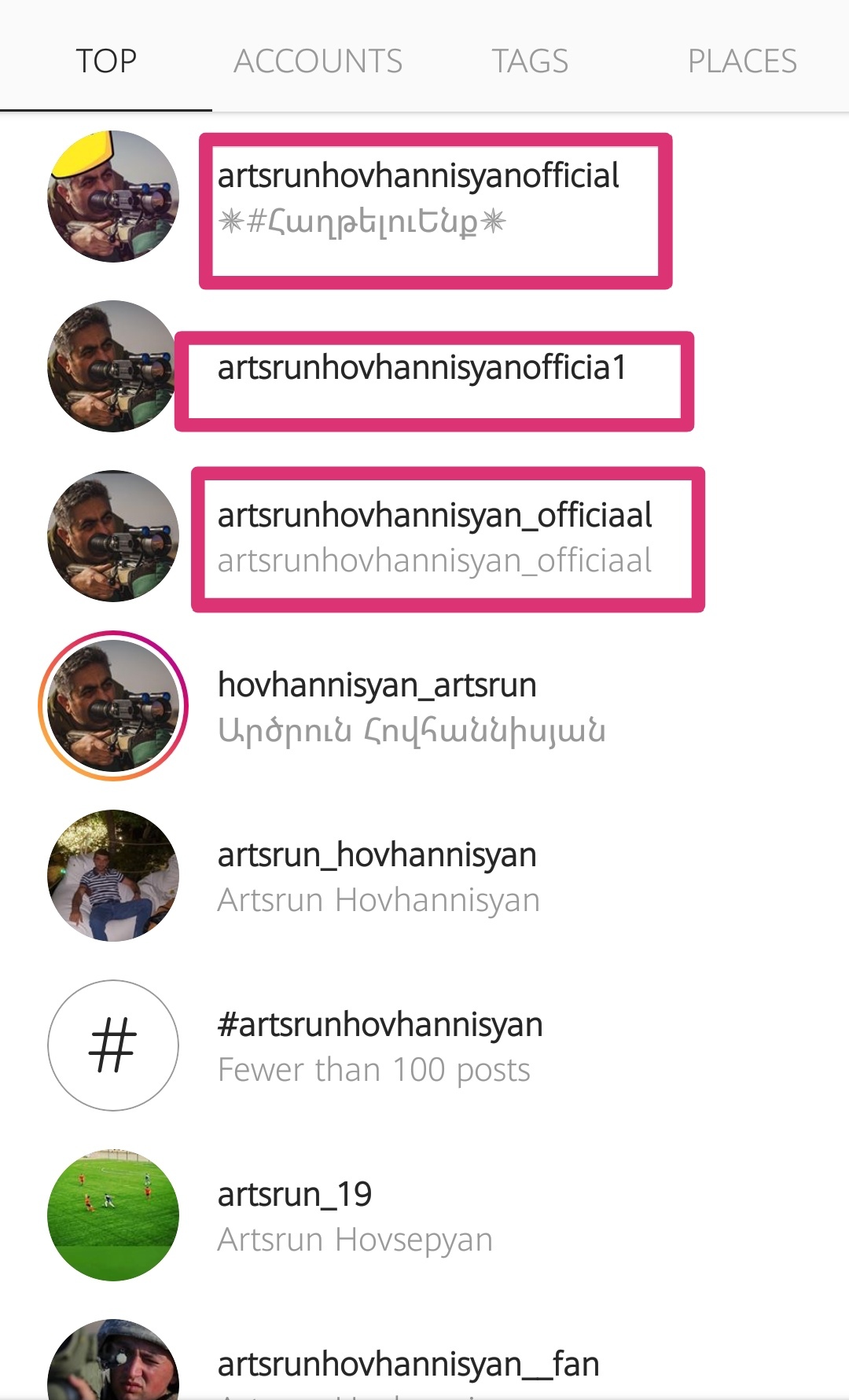 On October 8, it was announced that phishing sites similar to real Armenian Fund websites had appeared on the Internet. One of them was similar to the main platform of the Pan-Armenian fundraising website.

With the difference of one symbol (armeniafundejoinme.org, actually armeniafund.ejoinme.org) a fake website was created. After entering here, a warning is given that the site is phishing. If you do not follow the warning and upon entering, personal data will be appropriated, and the transferred money will be in the hands of fraudsters.

On October 6, a fake Twitter account was opened in the name of Artsakh Defense Army Commander Jalal Harutyunyan. It does not exist anymore.

There are two fake Twitter accounts named after Shushan Stepanyan

This fake page is currently trolling, making calls to report the real page. 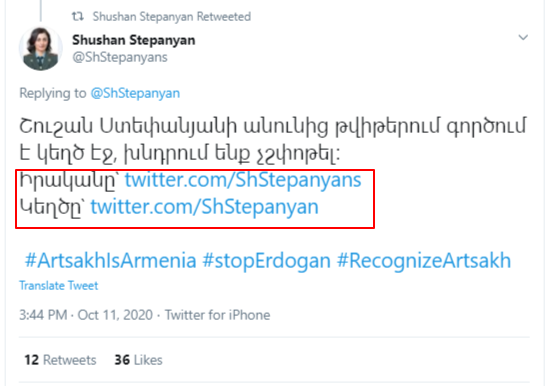 And the actual troll, as he confessed on his page, is the account under the name of @obabeyleri which was created in October.

Again, with only one character difference, there is also the account @ShStepanjan, the falsity of which is much easier to distinguish. It was created in October 2020, has a small following, and the posted content is Azerbaijani propaganda.

Ministry of Defense spokeswoman Shushan Stepanyan wrote on October 4 that a fake email account, [email protected] had been opened in her name ․ Letters and messages are sent from this address. She reminded journalists that she sends the official letters of the Ministry of Defense only from the e-mail address of the department.

Media.am has already referred to the fake page of Hraparak.am created on Instagram, hraparak_tv. The account, posing as a media outlet, asked its followers to “Take photos or videos of the events you encounter, send them to us for publication.”

Most likely, the account is managed from Azerbaijan․ It publishes information about allegedly killed high-ranking Armenian servicemen, occupied Armenian positions, and great losses. The page was created a few months ago but has started actively publishing during the recent Armenian-Azerbaijani clashes.

The page also has a logo, which is sometimes placed on published photos. Its content was spread on two Facebook pages, which are no longer available.

By the way, on October 8, Facebook removed 589 Azerbaijani accounts and 7,906 pages, and 447 Instagram accounts. They had been connected with unrealistic behavior. They were active during working days and hours in Azerbaijan time. The Facebook investigation connects this network with the youth union of the ruling “New Azerbaijan” party. They commented on local-regional news, including the escalation of Karabakh, praising Aliyev, his party, and criticizing the opposition.

Buzzfeednews.com wrote on this occasion that Facebook had known about this network for about a year. This removed the employee who made the discovery, and weeks later, the network.