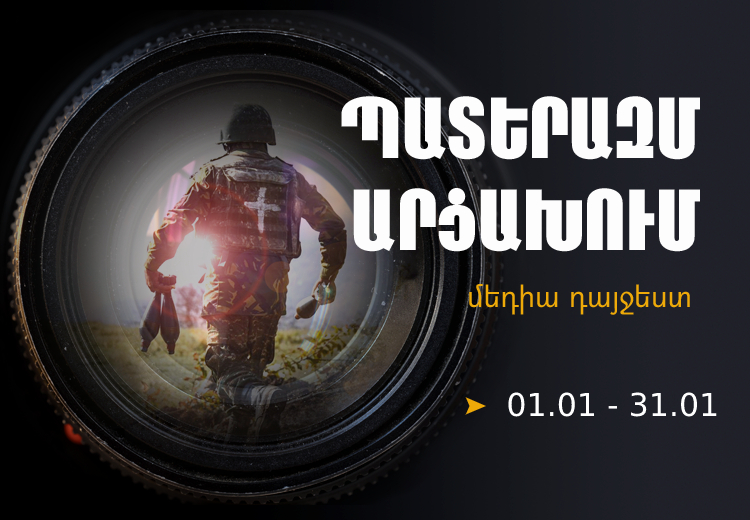 During January, one of the most discussed topics in the media was the exchange of prisoners of war and the unblocking of economic roads, which this time the authors mainly connected with each other. The idea was emphasized that the roads should not be unblocked without the return of the Armenian captives.

Public Television covered the topic presenting both the risks and the opportunities.

In one of the issues of “Lurer” the chairman of the Union of Exporters says that “Armenia can become the most attractive country for cargo transportation in the region.” “Currently, only Georgia enjoys the opportunities and privileges of transit in the region. Armenia is at a crossroads that is impossible to ignore,” he said, urging “at least at this stage in history to be guided by reason, not emotion.”

One of the businessmen also expresses concern that the cargo transportation through Azerbaijan will not be safe. He also considers it dangerous that all the information about the goods exported from Armenia will be available to Azerbaijan.

During another program entitled “Possible options for unblocking transport,” the host said, “In the case of Armenia, unblocking also contains security risks. The issue becomes even more worrying when the Azerbaijani propaganda narratives produced for their own people reach Armenia through the information corridor.”

During this issue, there was also a report on the connection of Armenia to Russia and Iran by rail and its economic benefits and security risks, which was a historical reference to the transport links between Yerevan and Baku.

During the “Interview” of the 5th channel, economist Suren Parsyan, speaking about the economic blockade, the construction of a railway to Azerbaijan through Russia, noted that, “It is obvious that in this situation, Azerbaijan’s main goal is the provision of the Meghri-Nakhichevan-Azerbaijan highway. The construction of the railway may be in that package, but the reality of that package is very low. One more fact: If the November 9 document states that Russia assumes security for the cargo transportation via Nakhichevan-Azerbaijan, then nowhere is it mentioned who will be responsible for the dangers arising during the cargo transportation through Armenia-Azerbaijan-Russia. There is no guarantee of security.”

During the evening news on ArmNews, Abraham Gasparyan said that “no one is against the construction or operation of a railway, but it should not be at the expense of our military-political security.” 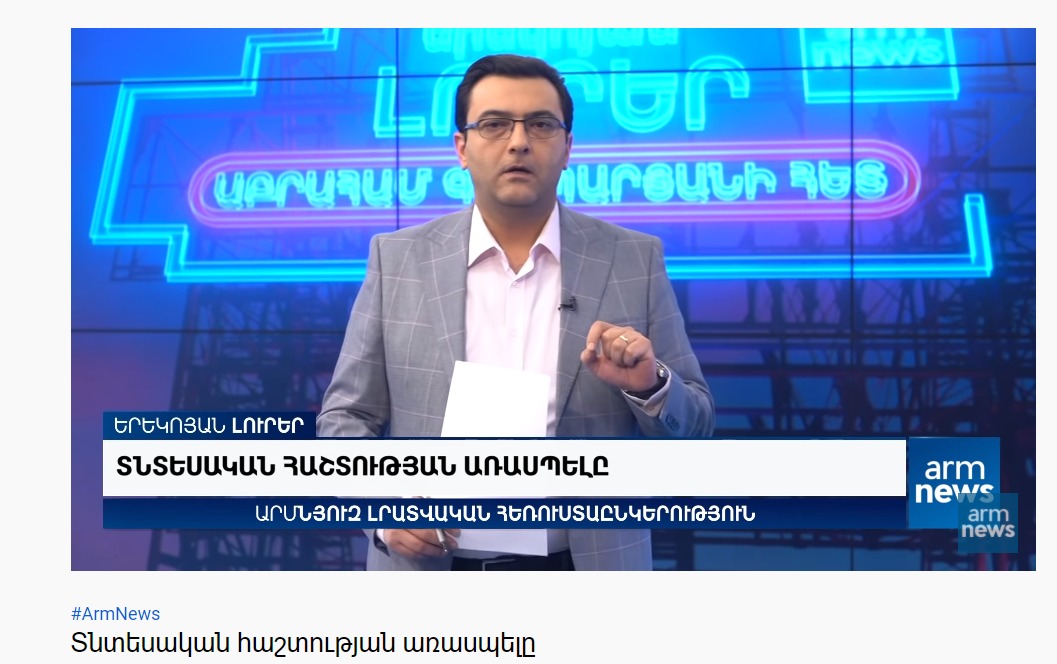 “Where is the legal basis for the construction of the railway?” “Where are we going without even giving a declarative solution to the issue of Artsakh’s territorial integrity?” He asks and continues the series of questions. “Do we have a strategy against the economic penetration of the enemy state or not?” “With whose money will we restore the destroyed post-war economy? Which state will give us a loan?” “Will international donor organizations invest here knowing that we have ceded our state to Russia?” “Which one of you will be the first to go to Baku by train or bus?…”

The newspaper sees a different reality in the opening of communications in the region, “under these varied economic prospects.”

“The point is that there can be no economic change here. These countries are connected in one way or another. In particular, Turkey and Azerbaijan are connected by the Baku-Tbilisi-Kars railway, which was built in recent years. The sections not built to connect this railway to other parts of Turkey are no bigger than the ones that will have to be built or repaired in the sections from Yerevan to Baku. And the Turkish program of economic and communication integration between Nakhichevan and Kars province is in active progress. In the name of opening communications, political programs are actually being implemented, particularly in Syunik.”

The reference of the Russian “Коммерсант” also had its place in “Hetq”.

The newspaper writes that theoretically, the document signed in Moscow should be beneficial for all three parties. Azerbaijan needs a road to Nakhichevan and Turkey, Russia – Turkey and Armenia, and Armenia – Russia and Iran.

Commenting on Коммерсант, Vahe Davtyan, chairman of the Energy Security Institute, said that in the medium term, Russian cargo transportation through Azerbaijan with Azerbaijani infrastructure will be more expensive for Armenia than through the Georgian ports of Upper Lars and the Black Sea.

“Although Azerbaijan declares equal access to transport infrastructure, it is obvious that it will show a protectionist approach, creating unfavorable conditions for Armenian cargo carriers. The hybrid war continues and will have mostly economic content,” Davtyan said.

Head of YSU Chair of Management and Business, economist Karlen Khachatryan also sees something else in the opening of regional communications․ In a conversation with 168.am, he said that in the trilateral document signed on November 9, in fact, it is difficult to see any economic component, there are more territorial and regional issues, and not in clear, general formulations.

According to the economist, the development of trade and economic relations with both Turkey and Azerbaijan is a direct challenge to Armenia’s economic and general security.

The website also published the opinion of Anna Karapetyan, director of the “Hayatsk” analytical center, that the policy of the Armenian authorities to open communications in the region and thus speak of positive prospects is more than unfounded today.

According to Anna Karapetyan, the agreements reached in Moscow pursue one goal – to accelerate the restoration of communication between Azerbaijan and Nakhichevan. “All this is presented in the context of the resumption of communications between Azerbaijan and Armenia, and the Armenian government is once again trying to mislead and manipulate the public with false narratives, to show that this process is also positive for us. Meanwhile, it is only a fulfillment of Azerbaijan’s goals.”

According to her, as long as there is no return of the captives, it is not normal to agree and implement anything with Azerbaijan. “The return of the captives is neither a political issue nor a desire, it is an important humanitarian issue that must be resolved one day. It would be natural for the Armenian government not to negotiate anything, not to agree on anything until that humanitarian issue is resolved.”

Azerbaijan moves the issue of captives to another field

This opinion was expressed by the RA Human Rights Defender Arman Tatoyan on Public Television.

Speaking about the fact that the issue of captives in political instances is unacceptable and the captives should be returned immediately, he noted that the urgency is due to the fact that hatred in Azerbaijan is deepening and institutionalized, and does not stop, taking on more condemnable forms.

“They use the military and political components to silence the legal, which we must not allow.”

During one of the broadcasts of Shant “Perspective,” the guest, human rights activist and representative of Armenia in the ECHR, Yeghishe Kirakosyan, referring to Aliyev’s statement that the people detained by them were not prisoners but were arrested for terrorism, noting that Azerbaijan is trying to give those qualifications.

“It is one of the steps by which they try to mislead the court or try to present them as terrorists, which is in the genre of absurdity. It is clear that they are doing this by trying to bring additional reasons and create an artificial obstacle so that they can delay or create an excuse not to return the captives.”

During one of the ArmNews programs, host Davit Sargsyan said in his speech, “The Moscow trilateral meeting did not record the most important and expected achievement for us. Our captives will not return to Armenia, and on this issue, there is no progress. Instead, as progress, we are presented with success by the fact that Armenia will be able to establish communication with Russia through the territory of Azerbaijan.”

According to the guest of the program, Stepan Danielyan, the captives could be returned, “if on November 9 Nikol Pashinyan did not forget, or maybe he was not interested or awake, to mention a date in that document. And Azerbaijan would not have any reason to celebrate that date.”

“As a result, Azerbaijan is putting psychological pressure on the Armenian government over the issue of captives,” he said.

According to international law expert Ara Ghazaryan, Azerbaijan has started to create a new legend. “The legend is that by concentrating large forces against a small Armenian armed group, they managed to capture 62 people after the armed conflict, although there was no peace treaty, and to present a legend that these groups are illegal because they are Armenian, part of the Armenian army, but are located outside the internationally recognized borders of the Republic of Armenia. ”

Ara Ghazaryan noted that the transfer of the issue of prisoners by Azerbaijan to the UN platform was a rather responsible step, from which there is no retreat.

Lars Patrick Berg, a member of the European Parliament, is concerned that Azerbaijan is not fulfilling its obligations under international treaties, has not yet fully returned the Armenian prisoners of war yet and believes that his country, Germany, can support the UN efforts to force Azerbaijan to fulfill its international obligations.

“It is unfortunate that Azerbaijan chose not to fulfill its obligations under international agreements. As far as I know, this issue has already been submitted to the UN, and Azerbaijan must refuse to violate the agreements. Prisoners of war have protected rights, and Azerbaijan’s attempts to rename these prisoners (presented as terrorists, criminals) simply show the country’s malice.”

Arthur Sakunts, head of the Helsinki Citizens’ Assembly’s Vanadzor office, says that for years the Azerbaijani authorities have continued to show political attitudes towards prisoners of war on the grounds of ethnic hatred. According to him, the search for the bodies of prisoners of war, missing persons and victims is subordinated to political goals.

“They use it as a tool to put pressure on the Armenian side. “Including not only as a tool of pressure to present foreign policy demands but also as a tool that intensifies the internal political discourse and in addition to the problems of prisoners of war and missing persons, Azerbaijan seems to continue holding Armenia hostage.”

PS Among the most discussed topics in the media in January was the joint statement signed by the leaders of Armenia, Azerbaijan and Russia in Moscow on January 11, the article “The Origin of the 44-Day War” by the Prime Minister in early January, and the response of the Russian Co-Chair to the OSCE Minsk Group. In addition to the official, event coverage, the media paid great attention to the discussions on the topic.