State Register Data Should Be Open To Everyone 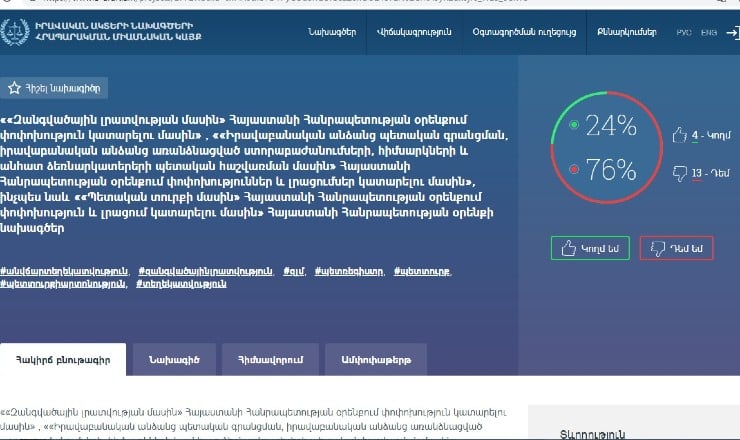 The Ministry of Justice has decided to make access to the electronic registry of legal entities free for journalists, but for this purpose, the journalists or media outlet should be registered.

At present, journalists pay the state a fee in order to get that data.

Amendments to a number of laws are already on the e-draft.am website. As of June 8, 76% on the website voted against the project.

The project has become a subject of serious discussion for journalists and organizations for freedom of expression.

A number of journalist organizations have issued a statement in which they express their disagreement towards the project and they demand that:

– Remove the provisions of registering mass media outlets on the Registry from the package and not to interfere with providing journalists with free information from the State Registry.

– Before initiating any new legislative initiative or idea relating to the media and information sphere to first make the subject open for expert discussions, then work together with the journalistic community and civil society to draft laws.

Hetq’s journalist Kristine Barseghyan said that she does not take the project’s package seriously because media registration is being discussed without any prior discussions and public hearings with all the stakeholders, without specifying the reality of what the media is today, website, blog, personal page or something else.

“Let’s say the media has been registered, and what about the freelance reporter? The blogger? The author of a material for an NGO? Is it a violation of their rights?” Kristine asks.

She believes that the Registry should be open to all.

Editor of Ampop.am Suren Deheryan said that he is completely against the package because the creation of a media registry will be ineffective. It is not yet known who the ministry means when saying mass media. For example, in opening an individual blog one might have a larger audience than any media outlet, and they too may also try to get information.

Deheryan said that it would be impossible to register all the media in that registry. Secondly, the notion of a registry is bad practice, for example in Russia, where Roskomnadzor follows the activity of the media and you have to register public information activities. “That’s hence the first step in being controlled at the state level,” said the editor.

According to him, the registry will create unequal conditions for the journalistic environment. “We will register as a news outlet on the registry so that we can get free information in order to publicize it. That is, we will make it free for everyone.”

“The privileged media is also obliged to provide a free public service to suggest that the audience send questions of interest to them in order to get free information. But did the authors of this initiative imagine the extent to which the expected that it would take in order to provide that information?”

Media expert Mesrop Harutyunyan urges the removal of this project.

He said that the fact that the Registry demands money to become registered is already illegal on its own, and it contradicts the RA Law on Freedom of Information. “The problem is easy to solve: you simply eliminate that absurd state fee and that’s it. The State Register becomes equal to all other state bodies and organizations. Otherwise, what advantages does it have? For example, the Ministry of Justice, who provides information (of up to 10 pages) free of charge (after exceeding 10 pages you only have to pay for the cost of printing, which does not exceed 20 AMD per page),” he said.

The media expert also points out Part 4 of the Law on Mass Media, which states that mass media are issued and distributed without any prior or current state registration, licensing, declaration of a state or other body, or notification of any body and says that the proposal is in conflict with at least this article of the same law.

Shushan Doydoyan, director of the Freedom of Information Center, is also of the opinion that the changes will deepen existing legislative contradictions.

According to her, there is no need to set privilege for any group in the public. The data contained in the State Register contains nothing confidential and, according to the RA Law on Freedom of Information, should be open and free for each member of society.

And establishing a special privilege for media will further deepen the contradiction between laws.

Vahagn Tevosyan, MP of the My Step faction, considers that the Ministry of Justice’s intention is not the limitation of a right, but the creation of a new right.