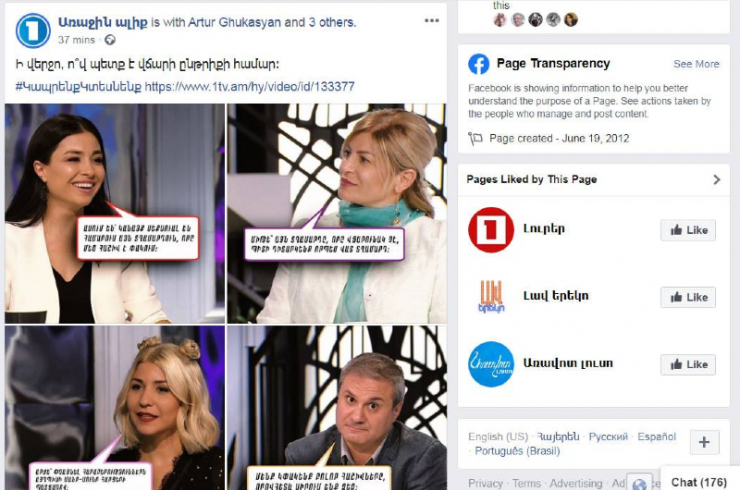 Any television production, where there is speech, can and should be analyzed in an easy way: write down in shorthand everything that you say on the air.

Moreover, write down all the spoken words and read them as text so that the ideas come out from between the words and the flaws become apparent. This is a necessary exercise for public speakers and, above all, for broadcasters.

What is not seen in oral speech becomes clear in writing.

It is clear that there is a lot of flaws in the speeches of anchors: useless phrases, repetitions, different “beauties” in the middle, weak and incomplete sentences, incomplete but inappropriate words. But there should be a spear of thought after all. Probably. Perhaps.

Over the years, television got used to the idea that people on the air (outside the media block) are called to be the master of ceremonies in the conference room, that is, to be the ones to fill the emptiness and fill it with cheer so that the audience does not get bored and God forbid the flow of words suddenly stops.

Actually, reporters are able to become self-sufficient and truly create authoritative stamps, if the amount of defects in their text is low, the words are not square and part of a template, and when they convey their ideas they write their own words.

Of course, it is ideal when speech interprets and expands an image. But it’s complicated, you have to be brief, deep, and as surprising as it may sound, kind. And when visuals are only the faces of the people speaking, such as in the new series of “We’ll Live, We’ll See” program on Public Broadcasting, the viewer has only one thing to do- not to look at the four speakers, but to summarize the words and try to find the idea.

This program, which aired four times a week is the unique post-revolutionary television production where you expect courage. And the most interesting thing is that you get that courage because preparing a report in an extremely glamorous style and giving primitive terrorist-style questions requires great courage in 2019.

For example, choosing the topic of the program, “Who Should Pay for Dinner,” having in mind the roles of men and women, means you have to be a real hero.

Or at least put into action the irony that has been going on for centuries, if asked in such a timely manner.

But it turns out there is no irony, people are seriously debating who should pay for food if men and women eat.

This is the first transcript of the talk, “In fact, to be charming, strong, talented, charming, that’s not enough, women are more interested in other traits than men, and in this show, we have to find out what it is.”

Not clear? Only a little.

Let’s put aside some amazing stereotypes that women should be feminine and vulnerable, while men make decisions and pay their bills (“I reach out to open the car door, forgetting that there is a man next to me,” “It turns out that if we open the bottle ourselves, that we are taking the role of the man away from him”,” Yes, there are still men who display masculine traits … and we women can feel completely feminine”).

An example of this program can be used to write a textbook on how the word was condemned to be a void of concealment at birth.

Speaking, as a rule, a good host does not pause but creates a pause. It is the highest level of professionalism in the field of speech workers. This implies that the pause is for a dialogue with the audience, at least to the inner thoughts of the audience.

The fast-paced, incomplete-lively and cheerful-glamorous style of speaking is not only unpromising in today’s media, where the monopoly of talking no longer belongs to television, but it is simply out of fashion, as you cannot polish (brainstorm, craft, re-craft) your own mind, keeping the audience in mind.

An audience that will definitely recognize the importance of the questions in this series as bait to hear a more serious conversation. I mean, how can you talk about the beauty of a woman, the need for marriage, the cross of being a single mother, plastic surgery and vulnerability to weapons, without having to deal with an illiterate, blind, or deaf audience?

Simple conversations, done without irony, are the biggest stereotypes.

Generally speaking, this program about women is a huge stereotype that is bravely broadcast on today’s Public Television.

For example, this statement, “It seems to me that some rights still need to be given to the man. And being a neo-feminist, you can say so, but I still like to put a plate in front of a man, to set a table for a man in for my very beloved grandfather. And I think there are certain things that a woman should continue to do, and a man should. There is no need to take roles from each other because if we take roles, the performance will not succeed.”

One more transcription, “Do you know what? I want to be the first to open a lot of quotation marks during this program. And the most important issue is to understand, that is, our assessment is made by the man as such, if he does not pay the bill, is he not a man? Let’s understand, again. If a man doesn’t have the money in that second or minute, then what?”

Other quotations, “It is said that women view the man who surprises them by closing the bill of a large order at a restaurant at night as sexy.”

“Respecting and appreciating the dignity of women, but at the same time it is fun to be a woman.”

“Of course, it’s fun when all the gentleman’s tricks are done.”

Another one, “I think we are to blame at some point: In the 21st Century we have tried to reach the limit where we define problems, we bring about situations where we constantly bring up issues that we are equal in, we can work, we can make money and we don’t need men at all, we can and having a child without a man, and now look at what we have come to.”

The words are many, beaten, and largely useless, as a broadcast expert can tell where a woman can compete with a man and where she can’t compete.

According to a public expert invited, a woman can compete with humor and upbringing, but not in terms of money. Got it?

In general, this show is a jumble of ideas like this, which can be clearly seen if printed as text. And it’s the first time that discrimination against men is presented as a glamorous women’s game and brave addition to the new era of public television.

For example, with this thought, “I think the woman should give the man wings so that he can become well-off and have a well-paid job so that the man can then invite her to the restaurant and close the bill.”

If you have no money, you are not a man. And there is no need for an upbringing to close the bill.