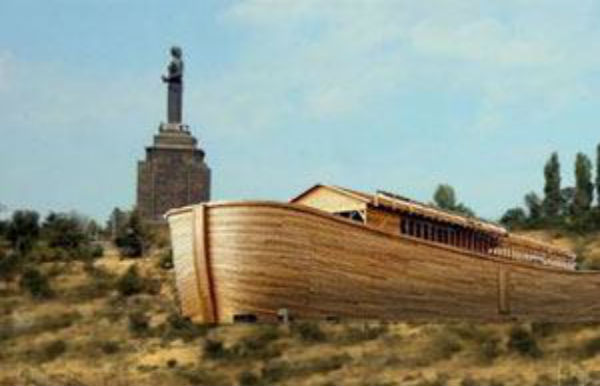 The Public Council yesterday directed its attention to the Biblical legend, and the media community — to the Public Council. In the outcome, the next patriotic project was publicly circulated, which simultaneously pleases the ruling party, the business community and nomenclatural intellectuals approaching the threshold of parliamentary elections.

I am referring to the precious and magnificent Noah’s Ark building project, which is to be constructed in Yerevan’s Victory Park and, according to the project developers, is to be a patriotic business project.

Following the media coverage of the prospective Noah’s Ark complex, one could notice that the information on the screen and that in the pages of print press were drastically different. TV stations mainly reported on the Public Council’s decision and presented the viewpoints of those advocating the project, showing neither the model of the three-storey entertainment complex nor its dimensions, which, by the way, correspond to the original size and bulk, occupying 100,000 square meters of land (the length of the vessel itself will be about 133 meters; its width, 23 meters; and its height, 14 meters — this we found out about from news websites the next day).

On television, you wouldn’t have heard even a word that some (if only Public Council members) were in principle against the project, since the microphone appeared only before those who fervently welcomed the idea of building the entertainment complex.

Also appearing on screen was project supporter and sculptor Levon Tokmajyan, who perhaps has hopes of future commissioned work. After all, about a billion types of animals fit in Noah’s Ark and it’s natural to expect that in the Yerevan version their sculptures will have to be constructed.

Not speaking about the suitability and real cost of the project were architects, who usually have an active stance in cases of Yerevan’s external appearance being disfigured. It seems TV reporters forgot that it’s necessary, if at least as a specimen, to present an opposing view and ultimately, show the new structure’s actual location and future appearance.

Instead, writer Meruzhan Ter-Gulanyan was making a beautiful speech, saying that everything will be fine, since there are funders for this project and Noah needs to be linked with our republic whilst it still hasn’t been done by others.

One could become informed of opposing (mainly skeptical) views only on news sites and in the papers, which offered quite a range of liberal comments — tying the project with the new habit of eliminating green spaces and with giving “official intellectuals” a topic to discuss ahead of the parliamentary elections.

Such polarization of information delivery is very frustrating especially when we are talking about genuine public interests. And the reason, of course, is the internal and external control of journalists — self-censorship, as a result of which the fragments information are arranged in such a way as necessary for the “higher-ups,” even if those higher-ups are unaware of it.

He who is the most higher-up (God) is perhaps having a lot of fun.

Since the successful attempt to revive the life of the ark is a Biblical legend, it’s natural to assume that the museum-attraction embodiment of one of the pages of the Holy Book will take place under the auspices of the Armenian Apostolic Church. Our church, which has a problem of increasing its faithful flock, can view this project as an opportunity for the “oblation generation” to become acquainted with true values.

Especially since we’re talking about flora and fauna, and animals, nature and struggling heros are loved by all children without exception. I think, the Catholicos personally has to oversee construction of the vessel. Even if doing so would mean putting aside building his residency complex in Yerevan, the public effect of which is a minus sign.

Note, the Noah’s Ark project is a business plan, for which businessmen are allocating money ($3 million dollars was noted). The project is being touted as a “scientific, educational, historical and cultural complex,” which will include a hotel and restaurant on its grounds. That is, history, education, culture, cuisine and leisure have been poured in one pot with spices glorifying the homeland and religion added for good measure.

Let the world see that Noah, his ark and its contents are ours, just as the Public Council, public television and public parks are ours.