It Is A Peaceful March Of Moroccans, Not A Kurdish Exile In Syria 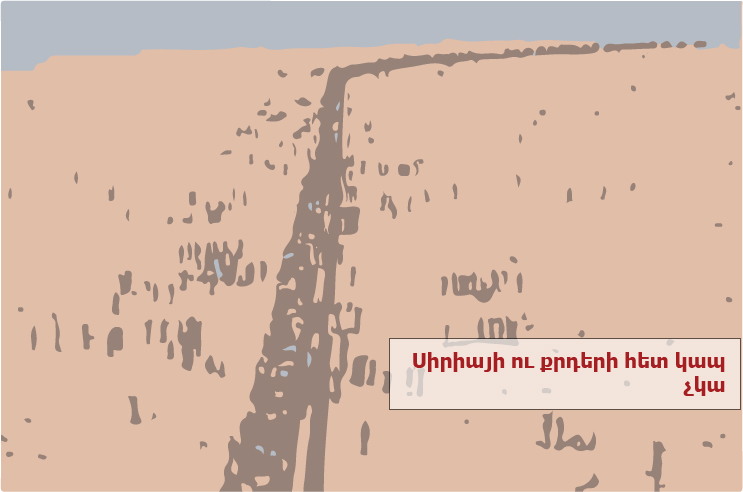 Since October 10, the Turkish military has launched an attack on the northern areas of Syria under the control of Kurdish rebels. The goal of the “Peace Corp” operation is to “eliminate the terror corridor on Turkey’s southern border, neutralize Kurdish militants and Islamic State detachments, create a security zone and provide conditions for the return of Syrian refugees.”

Both Armenian and international media are covering these clashes.

In the context of Armenian media, the primary concern is the news about the Armenians living there and their neighborhoods. There are Armenian media outlets that can receive news from the scene, but misinformation has not been avoided, especially on social media.

Pictures of the Kurdish massacres and the days of the Armenian Genocide are being spread side by side on social media. This pictorial parallel seems to reflect the repetition of Turkish violence.

This photo has been shared twice in the last two days in the Facebook group “The Armenians” which has about 46,000 members. 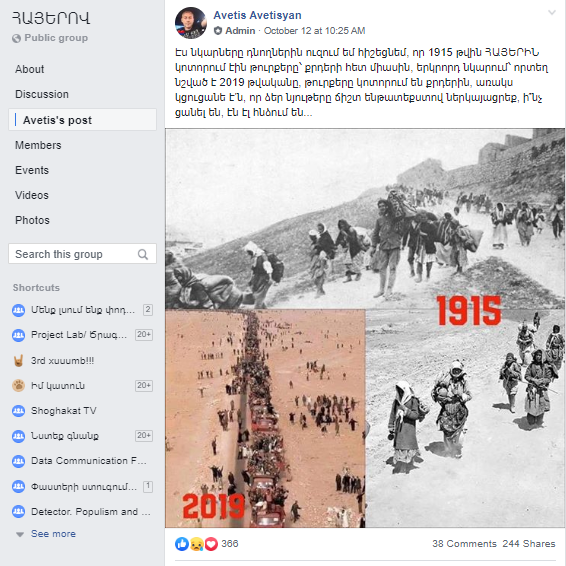 The photo is accompanied by the following text, “I would like to remind those who submitted these pictures that in 1915 Turks were massacred by the Armenians along with the Kurds. In the second picture, which was taken in 2019, the Turks massacred the Kurds, would they present your materials in the correct context? They reap what they have sowed…”

In the comments section you can find examples of those with a militant nature:

⇒ “Well, say the continuation: In the next picture Armenians will kill the Turks.”

⇒ “My God, I’m honestly starting to worry. If this massacre continues the second Hitler or Genghis Khan will become those Ottomans. ”

There is also such a thesis:

⇒ “The Armenians were mainly slaughtered by the Kurds, complementing the Turkish-Kurdish one, and the Kurds were even more predatory and, for me, they are the same beast, and let the beasts destroy each other. I know that the Armenians are already out of that territory. The Turkish-Kurdish-Russian-American elite know better than us what they are doing and what their interests are.”

And a user named Ara Mk, later sharing the same picture in the same group and on his personal page, alerted, “History repeats itself to Armenians, snap out of it and be vigilant. This is still the beginning of the 21st century but the continuation of the 19th century, and the #1 goal of the Turks is to permanently eradicate Armenians from the face of the earth…”

A picture of Turkish President Recep Tayyip Erdogan in the context of the Genocide was also spread in this group.

The picture is from the Green March

It turns out that the spread photo collage is not very true. The picture attributed to the Kurds has nothing to do with them. Moreover, what is being presented today as the slaughter of Kurds, a new genocide, has turned out to be quite a festive march, accompanied by peaceful and cheerful songs.

The photo was taken in October 1975 during the Green March organized by Green March to liberate the southern regions of Morocco from Spanish colonialism.

The October 1975 judgment of the International Court of Justice in The Hague was, in essence, the legal basis by which the southern Spanish colonial regions of Morocco were reunited with Morocco.

However, before Madrid, Morocco, Spain and Mauritania would sign an agreement on the return of territories on November 14, Morocco’s King Hasan II organized the Green March, which was reported by Morrocco World News to be the largest, longest and most peaceful campaign in the world.

About 350,000 Moroccans were heading south to unite, carrying the Koran and green flags with them as a symbol of peaceful campaigning. And those who didn’t attend the march were following the events on the radio.

Since that day, every year on November 6, Moroccans celebrate Green March day as a national holiday.

In response to personal correspondence on social networks and false information circulating in various groups, Lilit Martirosyan’s publication is also circulating these days about the context of this photo.

To compare it with the spread of misinformation, let’s mention that Lilit Martirosyan’s Facebook post has 71 likes, 64 shares and 4 comments.

📣️This photo was taken on November 6, 1975, during the Green March campaign, aimed at returning a disputed territory in the western part of the Sahara from Spain to Morocco.

This photo is being shared on Facebook as a photo taken only days ago in Syria. They compare it with another photo taken during the Armenian Genocide.

🔴 This photo was not taken in Syria and has nothing to do with the events in Syria.

It isn’t worth distributing materials unless you are sure when the material was made, who its author was and what the source was.