“In war zones you must be extremely careful, but bold” 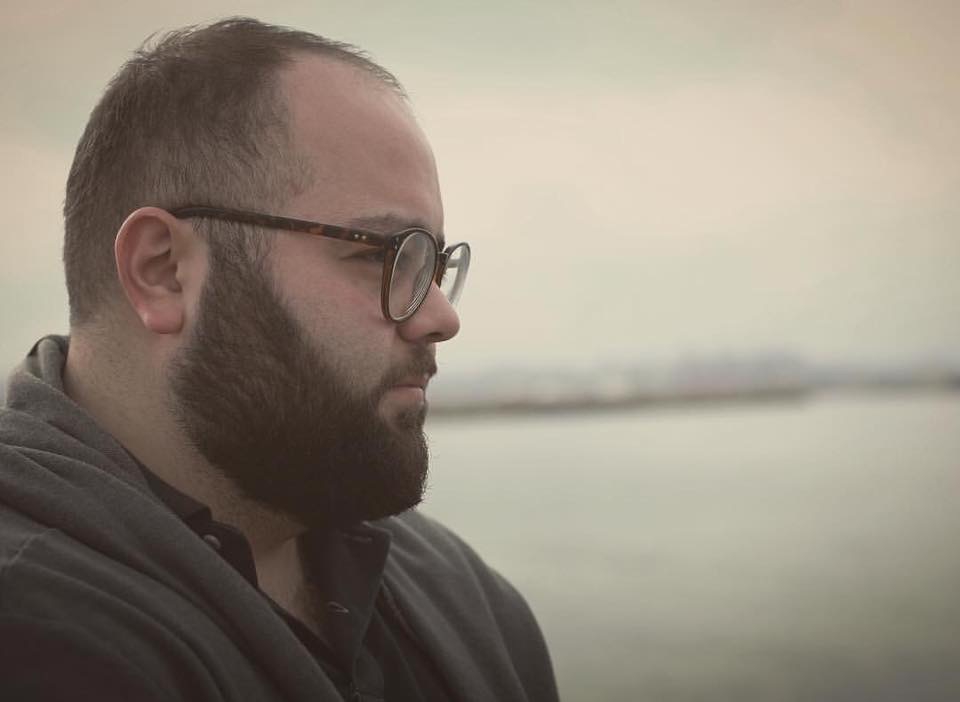 A great sense of responsibility, courage, ability to overcome force majeure situations, the ability to plan your work in advance. These are the important principles that guide Public TV Company of Armenia journalist Tigran Danielyan when working in war zones.

Speaking frankly, he says that a journalist’s work in conflict zones turns into a game with destiny, and you never know how it will end. All the same, he’s crazy about journalism and prefers to work in these conflict areas.

“When wearing a bulletproof vest and helmet you’re running from a German military base to the Romanian base, a USB key in your hand, because the internet is faster there, so that you can send your video… only a journalist will do that, because at the time of running, anything can happen to him,” says the journalist, recalling his days in Afghanistan in 2012, when he went to produce a reportage on the Armenian peacekeepers for the Armenian army’s 20th anniversary.

He remembers when the TV station told him that he had to go to Afghanistan, he first refused, then later agreed, and reached the place with the heaviest fighting, Kunduz, where Armenian peacekeepers were stationed. 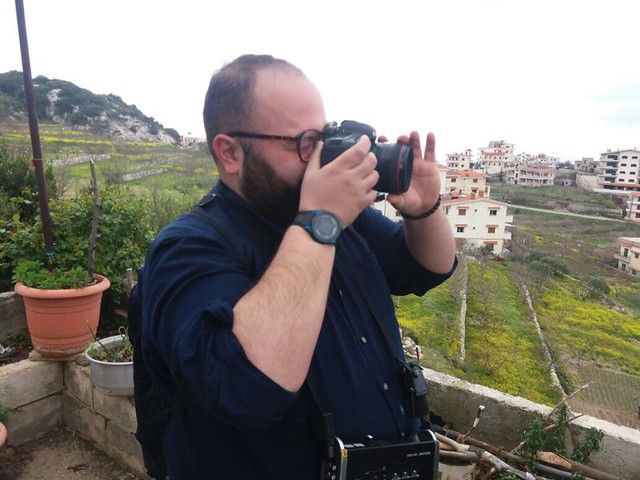 He left for three days, but he spent nine days in the war zone. They reached Kunduz from Uzbekistan by military aircraft. Before arriving in Kunduz, he spent two days in Mazar-i-Sharif as a result of bombing.

“At the time I didn’t understand the full responsibility I had. I remember they gave me a bulletproof vest and a helmet, we went by car. The soldiers tell me, ’If they suddenly shoot and something happens to us, throw yourself out of the car, into the ditches dug in the road.’ I jokingly replied, ‘Boys, it took 15 minutes for you to barely get me in the car with this outfit, how fast am I going to be able to get out? I have to say, I’m terribly sorry, please don’t shoot, I’m going to throw myself in the ditch?’ I remember all this humorously now, but we were in real danger,” recalls Tigran.

He confesses: Afghanistan for him was not only a risk, but also an adventure — until the moment he witnessed an explosion a few meters away.

“You hear an explosion and you’re told, a man exploded… slowly you understand the gravity of the situation; in this sense you have to be very realistic. Journalists who work in conflict zones must bear exclusive responsibility,” he says.

He shares his own journalistic geography: Afghanistan, Cannes Film Festival, a filming at Keeping Up with the Kardashians, the Syrian war, and here he stops for a moment. 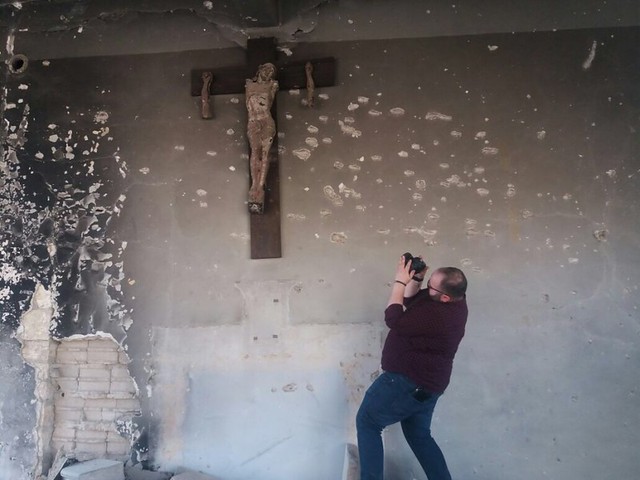 “One day I have to decide in terms of choosing a clearer direction, and now I can definitely say, I choose the second: to cover conflict zones such as Syria, Aleppo. Human destinies interest me the most,” says the journalist.

Tigran went to Syria for the first time in 2016. He went to Damascus. His second visit was in March and April of this year. He first went to Aleppo then Latakia, then Kessab. He filmed the documentary The Fight for War and Peace.

To go to Syria, he first had to go to Beirut by plane, then take a taxi to Syria. 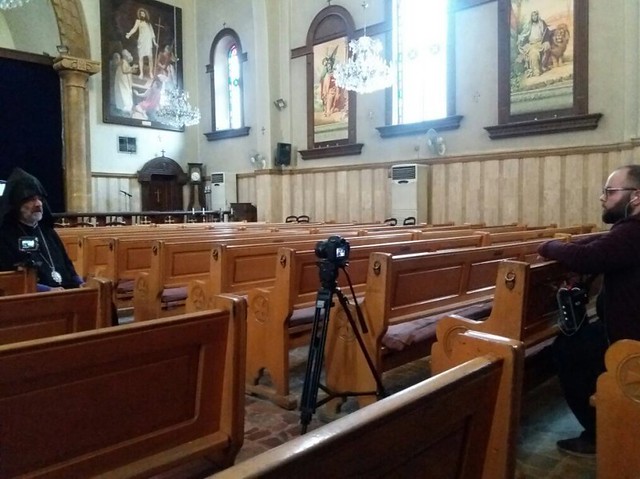 “I get off the plane and an hour later, the Beiruti Armenian taxi driver is waiting for me; there are other passengers in the car besides me. We go to Aleppo through villages on a terribly bad road. I’m delighted because I’m going to go do the journalist’s work that I’ve dreamed of, that I’ve waited for, that which is mine,” recounts Tigran.

At the Lebanon-Syria border, the Armenian journalist is banned entry. He is told he doesn’t have special permission to film.

“In such situations you need to act quickly. I immediately took into account the fact that the Syrians are reckoning with the Russians, and I decided to do a trick to mislead them. I began to talk very loudly in Russian, almost shouting, that right away I’m going to call the Russian troops, even Putin… They got all mixed up and began to quickly solve my problems, though they didn’t have the right. I had also bought small Syrian and Russian flags and fastened them to my clothes. They felt a Russian air [about me] though my passport was Armenian, and I crossed the border,” he says.

Tigran shares his first impressions of Syria: on the other side of the border, was a walking war, burnt cars, burnt and destroyed houses…

“At every checkpoint, there are bribe-taking soldiers. They stop the car about 30 times, after the tenth time it becomes normal. After 11 hours we reach Aleppo, where it seemed there were spirits coming out of the destroyed buildings. The beautiful huge white buildings destroyed, torn clothes everywhere. I’m heading to the neighborhood of detached houses, where only a few bombs have fallen. Armenians also live there. I am greeted by Armenia’s consul, Tigran Gevorgyan, who today is the only diplomat from another country in Aleppo. All the diplomatic missions in Aleppo are closed. They take me to a hotel,” he recounts.

Tigran is greeted by a hotel with its lights off living its daily life in war-ravaged Aleppo. The journalist’s worry on how he can charge his devices dissipates when he discovers that the lights turn on for three hours every day at 9 p.m.

“They turn on the generators operating with the hotel’s oil. The world could turn upside-down, but every day I had to be at the hotel at nine o’clock, so that I could charge my equipment. And then I’d quickly go back to filming. Also impressive for me was the Arabic breakfast offered at the restaurant of a warring country, with its wonderful flavor and aroma,” he says. 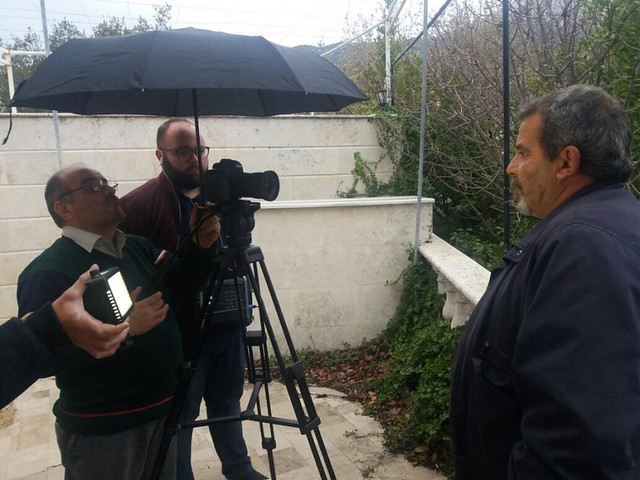 “You go to someone’s house to do an interview. He talks to you wearing his usual shirt, but you go with a helmet and vest — that’s so humiliating. Instead, the driver who drove me around in Aleppo had a gun in the car, so that in case of danger, he could protect both himself and us,” recalls the journalist.

Tigran spent 10 days in Syria. He says you must always be careful, but courage is half the work.

“We did some filming at night, which was prohibited in the city and very dangerous. The bombs are constantly falling on the city, and you don’t know where they will fall at that moment and if you won’t be right there. When we went to Latakia, there was a place where the terrorists and the soldiers exchanged POWs, it was a very dangerous place, and we passed through there. This means being extremely careful, but bold,” he says.

He advises journalists working in war zones to be an adventurer, but within reason. Before going to film, picture the product as well as possible: at most imagine what strong points you need and how to get them. According to him, all this saves time, and helps the camera operator and the other members of the team act quickly. He doesn’t rule out force majeure, but he is certain that, all the same, you need to proceed with a plan.

“You have to be ready for any situation. I knew that if something happened, I need to quickly call our consulate, quickly inform any international agency. That is, to go only for the sake of going, to reach, for example, the frontline, do a beautiful stand-up… no, it’s not like that. We have to understand why, after all, we’re doing all this. I’m doing it for my family because they, like others, are ordinary citizens for whom television continues to be the main source of information. And we have to show what’s there, without excessive patriotism, more accurately.” 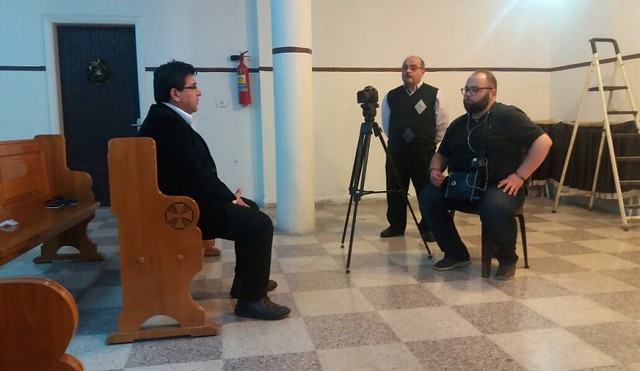 Another of Tigran’s pieces of advice is to save the information you collect, your material on several drives, and if the internet connection is strong where you are, also on iCloud, Google Drive, or Dropbox, and have card readers. He remembers how when he returned from Afghanistan, the Uzbeks took his video footage, but he accepted this quite calmly, since he had already sent the video material electronically.

“I always have glue and a screwdriver because anything can happen. Most importantly — never save money on good shoes, have suitable, all-terrain shoes, a comfortable backpack. Also, water, a small towel, liquid detergent, and if it’s the East, sunblock. Have money, and keep it in different places. If you have to pay, for example, 100 dollars, don’t take out all your money, just the 100. Find reliable connections until reaching your destination. At hotels, pay attention to foreigners, who often follow us in such places,” enumerates Tigran.

He advises his colleagues to substitute the word “enemy” with “opponent” and not to sow enmity.

“I’m crazy for my profession, I love it a lot, and I want so much to go back again, with great pleasure. There’s so much there to cover, human destinies first of all,” he says.

He knows that to go to conflict zones you need to set aside emotions, which interfere with working properly.