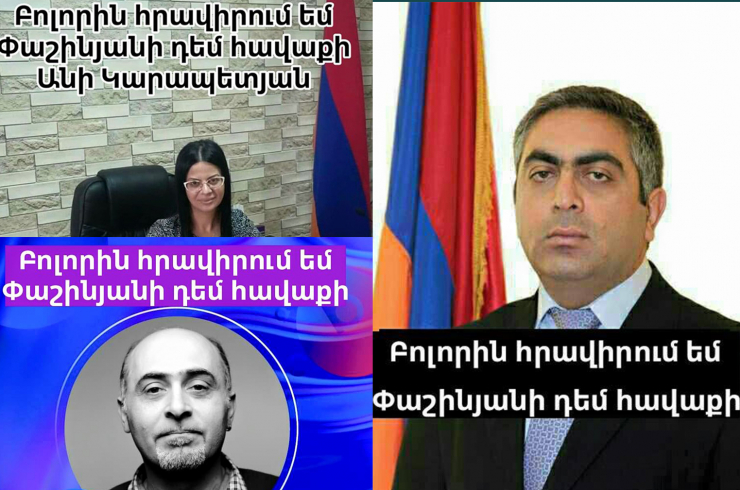 Media expert Samvel Martirosyan announced that a fake call rally against Nikol Pashinyan is being spread on his behalf and with his picture. Media.am found out that Martirosyan was not the only one. For example, a photo of Artsrun Hovhannisyan, a spokesman for the Ministry of Defense, was circulated on Facebook with the same appeal. The pictures had up to 900 comments and several hundred likes.

All these posts were posted by a user named Rima Mamyan in different Facebook groups. Her account, however, was hacked. Samvel Martirosyan made an announcement about it on Facebook. Martirosyan believes that these publications are not intended to promote any site or group. He assumed that the photos were distributed by different groups from Azerbaijan.

Regardless of the motives of the users, the Facebook groups, where the pictures were distributed, often have a similar style. For example, the fake photos inviting people to a gathering were posted on the Nikol Pashinyan / Velvet Revolution group, which has about 35,000 members. More than 400 publications were made in the group on September 13 alone, and about 10,000 in the last 30 days.

This group is fake. It’s not about the Prime Minister or the revolution. Its “Descriptions” section does not contain data on group activity, but only states: “To post ads in the group and share news site materials, call the following phone number […].”

In the About section of the group you can see the page associated with it: HotNews.am. This is a mushroom site, that is, a fake news site that disseminates material from other platforms and makes money with contextual advertising.

Mushroom sites create a network of pages and groups on Facebook

Mushroom sites have almost no direct visitors: their main distribution and visits are from social networks. That’s why mushroom sites try to get a lot of followers on Facebook groups and pages and create multiple FB platforms at once. Thus, you can easily find one mushroom site group having an administrator that can be found managing several other platforms as well.

For example,  the groups “Nikol Pashinyan / Velvet Revolution,” “Interesting News / Hetaqrqir Norutyunner” belong to HotNews.am, as well as two pages called HotNews.am (@hotnewsarm and @ www.hotnews.am). One of them was created in 2018, under the name “Mari Sargsyan,” then changed the name to “Hotnews Sargsyan,” then “Hotnews.am Sargsyan” and finally “HotNews.am.”

This page has about 4,500 followers and distributes HotNews.am publications. The other two participants disseminate various materials on the platforms, such as humorous videos, job announcements or political memes, such as the “I Invite Everyone to the Rally Against Pashinyan” series above. Group administrators ask participants to be as active as possible.

The Interesting news / Hetaqrqir Norutyunner group has 7 administrators, including a page named “Mari Sargsyan.” Among the admins is another mushroom site Arena News / Arena News page. Some administrators are Facebook pages, and some are real users.

Pages gather audiences in a variety of ways

Political content is one of the most widespread. For example, the pages “News from Armenia” and “I Trust Nikol” are registered in the TV channel and News and Media Website categories and use Pashinyan’s pictures. The latter page distributes materials from the mushroom site ochenklyovo.ru.

Mushroom sites attract followers both through Facebook ads and by buying or renaming pages that already have an audience. Some Facebook pages also make money by placing ads on their platform.

HotNews.am and its associated platforms are not the most popular. “HayerovTV” is active in the Armenian domain of Facebook, which has about 486,000 followers and disseminates materials from the mushroom site sportarmenia.ru. The pages “Hye Info” and “INFO Links” have about 230,000 and 190,000 followers respectively and also distribute materials from sportarmenia.ru and several other mushroom sites.

Sometimes Facebook networks that publish mushroom sites are a real mess. For example, the group “Main News” publishes material from maxinfo.am, azat.tv, mer-info.ru and other mushroom sites, but also from regular news media. At the same time, this group was created by the page “Evka_handmade_ toys,”  which is really dedicated to handmade toys. One of the members of the group is the user “Evka Handmade Items” (who sells the same stuffed animal toys).

Here is a list of active mushroom sites in Armenia since the beginning of the year.