Fake News That Was Circulated And Refuted Between November 1-15 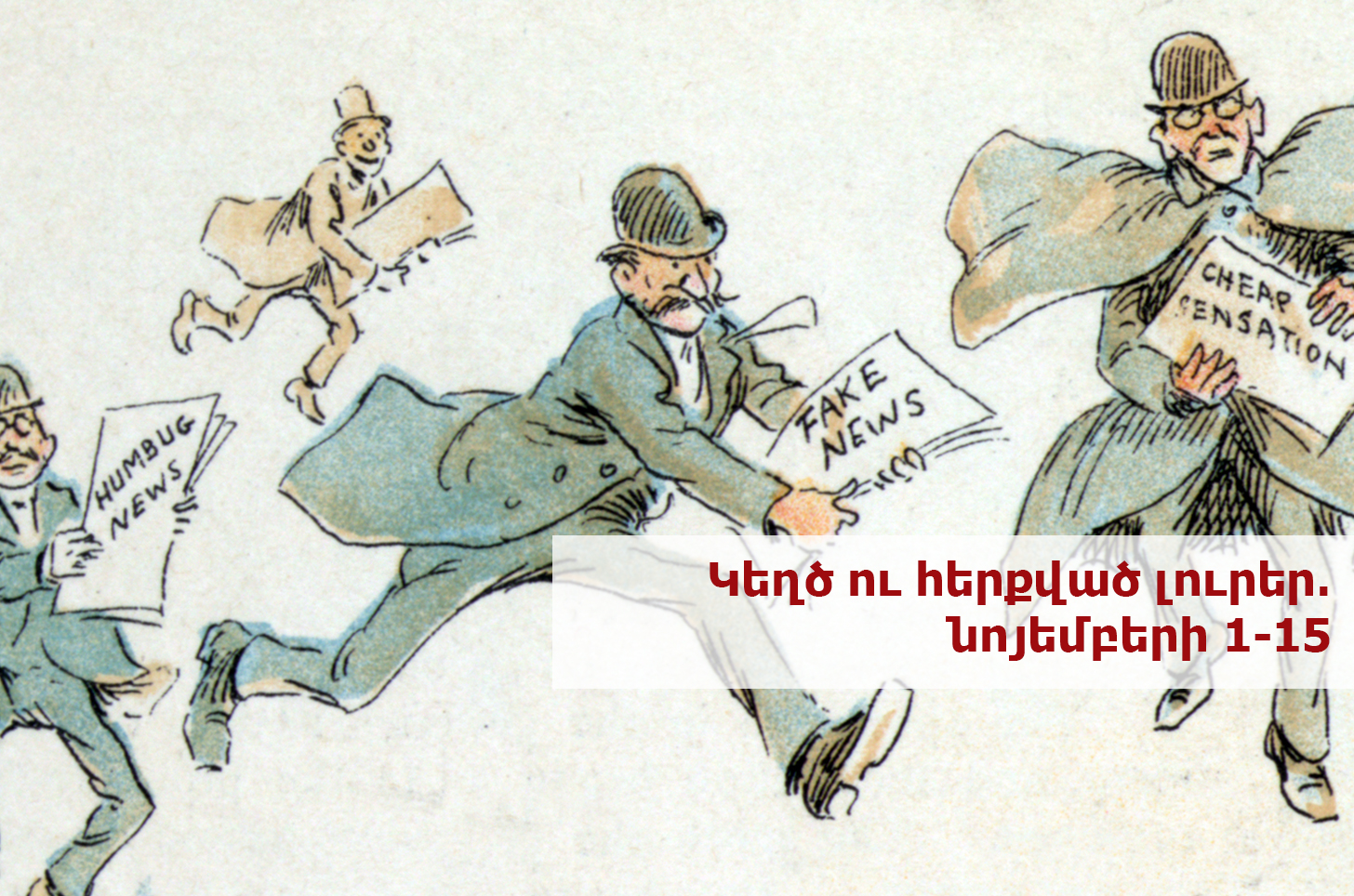 In the first half of November, misinformation was also being spread by fake news pages, and in some cases, the fake news could be checked by the content in the articles themselves.

In November fake news pages imitating the media were active in Armenia. Both the name and the color design of Factor News Armenia are intended to resemble Factor TV news. 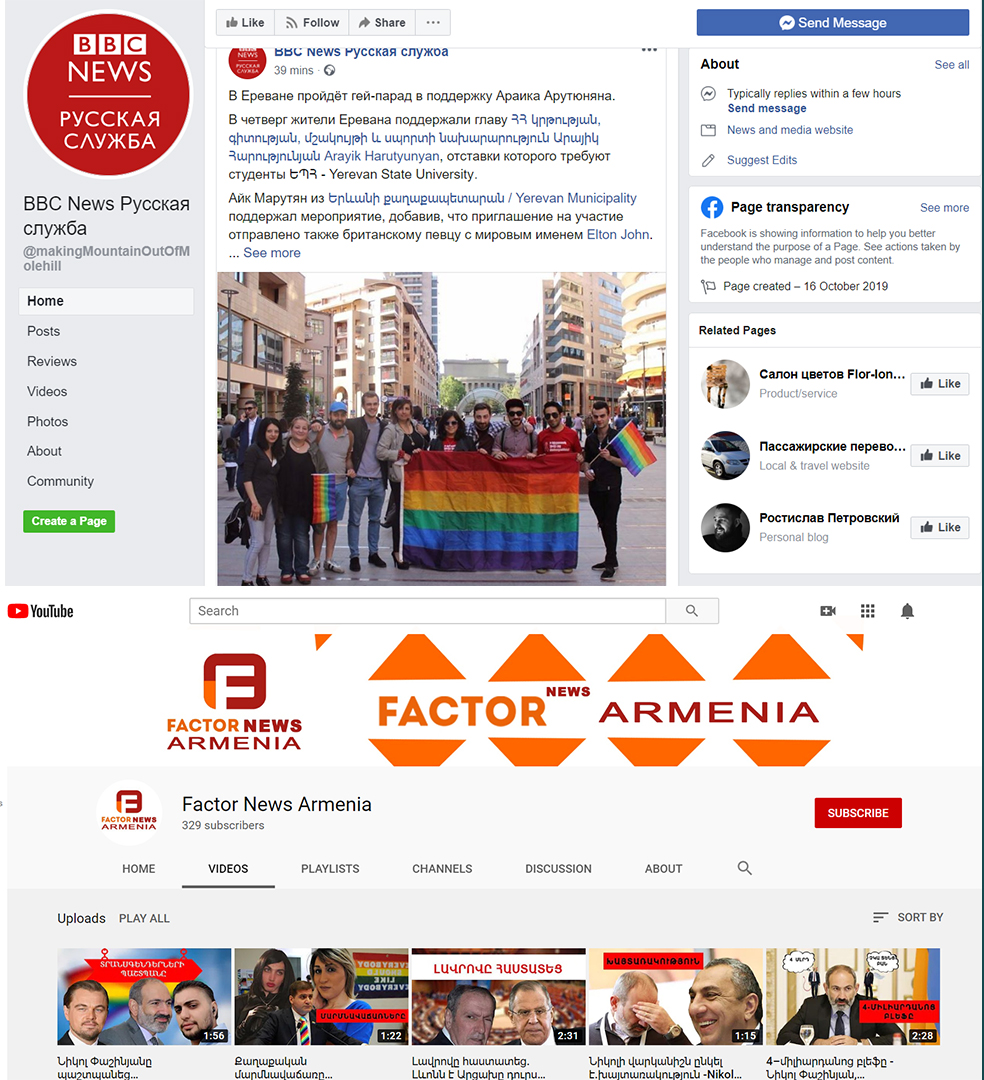 Earlier in November, another page mimicking the media was active on Facebook – the BBC News Russian service. This page also spread misinformation. As of November 14, the page has been removed from Facebook.

Fake news and its denial in one article

On November 11, Politik.am, citing Times.am, wrote that Nikol Pashinyan had responded to a protest demanding the resignation of Minister of ESCS Arayik Harutyunyan. “Even if 10,000 people take to the streets, even if they go on a 24-hour sit-in, it isn’t worth one cent to me. Arayik Harutyunyan will continue to serve.” The article was reprinted by 168.am, Iravunk newspaper and a number of mushroom sites.

Immediately after quoting the statement, in the same article, Politik.am stated that it was false.

The newspaper presents the words of Prime Minister’s Spokesman Vladimir Karapetyan, “no such conversation had taken place, the Prime Minister has stated his views publicly during a meeting with demonstrators and live broadcasts.”

Although Karapetyan denied the information, ARF Dashnaktsutyun member Lilit Galstyan speculated about it on Radio Liberty.

The false rumors about the Istanbul Convention aren’t stopping

The title is manipulative: The article does not mention the Istanbul Convention. Instead, an attempt is made to link the convention to LGBT community-related topics, as the article is entirely devoted to the recent Rainbow Forum organized by Pink Armenia, an NGO for the protection of LGBT rights.

It is worth noting that the title related to the Istanbul Convention was added by Yerevan.Today and that the title of the original article is different.

In November, MP Gevorg Petrosyan suggested banning same-sex marriages (which are not allowed), and MP Vardan Ghukasyan announced that King Pap should be “cut out from national history” because he was gay.

The media also joined the politicians in speculating the topic. Politik.am published an article which was published months ago in The Jerusalem Post, that homosexuals were hanged in Iran.

It is worth mentioning that Politik.am noted that “Iran is one of the 700 countries in the world where homosexuality is considered a criminal offense,” although there are only about 200 states in the world.

Referring to the film about Mel Daluzyan, PAP MP, Chair of the Standing Committee on Human Rights and Public Affairs Naira Zohrabyan stated, “Due to Daluzyan’s doping scandal, Armenia’s weightlifting team is in serious doubt at the 2020 Tokyo Olympics, and the participation of the Armenian team is yet to be discussed on May 31.”

Earlier, Analitik.am also claimed that Daluzyan was to blame for the disqualification of the Armenian national team. However, both Zohrabyan and Analitik.am distorted the facts.

According to the International Weightlifting Federation regulations, countries with more than 20 positive doping tests will be able to represent up to two athletes at the 2020 Tokyo Games.

In May 2019 it became known that Mel Daluzyan had a positive doping test. This was the 19th positive test of the Armenian national team. Fip.am has released a list of athletes who have tested positive.

There is an error in Hraparak newspaper’s calculations

Hraparak daily wrote that the number of diplomatic passports issued by the Prime Minister after the revolution is not 19, as the authorities claim, but 500-600.

This number was obtained by applying the “simple math” to the paper, including those holding diplomatic passports, the 19 mentioned above, and their family members.

This is wrong. According to the Prime Minister’s decision, only 19 people, not their family members, were issued diplomatic passports.

Moreover, this number should be considered separately from the number of diplomatic officials who hold passports. In the case of the latter, the family members also receive a diplomatic passport.

In the first half of November, there was a widespread discussion of teaching the subject of the “History of the Armenian Church” in elementary school.

This discussion started with misinformation.

On October 30, Haykakan Zhamanak published an interview with Arevik Anapiosyan, Deputy Minister of the Ministry of ESCS, titled “There will be no ‘History of the Armenian Church’ in schools: the subject will be taught integrated with Armenian History or with a different title and content.”

Although working groups have already been set up, no decision has been made on the subject. In the interview, Anapiosyan expressed her personal opinion and added that the decision has not been made yet.

168.am wrote that “In the words of Romanos Petrosyan, the governor of Kotayk, he too is rewarded every month as per the secret order of Prime Minister Nikol Pashinyan.”

In the video attached to the article, however, Romanos Petrosyan makes no such statement.