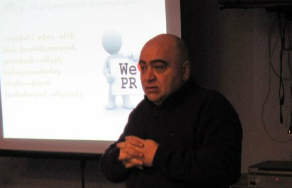 The letter, in short, reads: “Our colleague Tigran Hakobyan is imprisoned, with charges against him. Not discussing the essence of these charges, we invite your attention to [the fact that] Tigran Hakobyan is one of the distinguished figures of our media field: he managed the papers Respublica Armenie and Hayk, the State Committee for Television and Radio and Armenpress news agency. Let us inform you that he has health problems — in particular, he has undergone heart surgery twice and now his condition is of concern. We are also confident that he, being released, will have neither the intention nor the occasion to influence the investigation process. Taking all this into consideration, we urge you to change the precautionary measure against him, exchanging it for his signed promise not to leave the country.”

It’s important to note that the letter has been signed by representatives of publications such as Haykakan Jamanak (“Armenian Times”) and Hayots Ashkharh that have different political views. Joining this campaign of solidarity in the news media sector are TV company directors and editors.